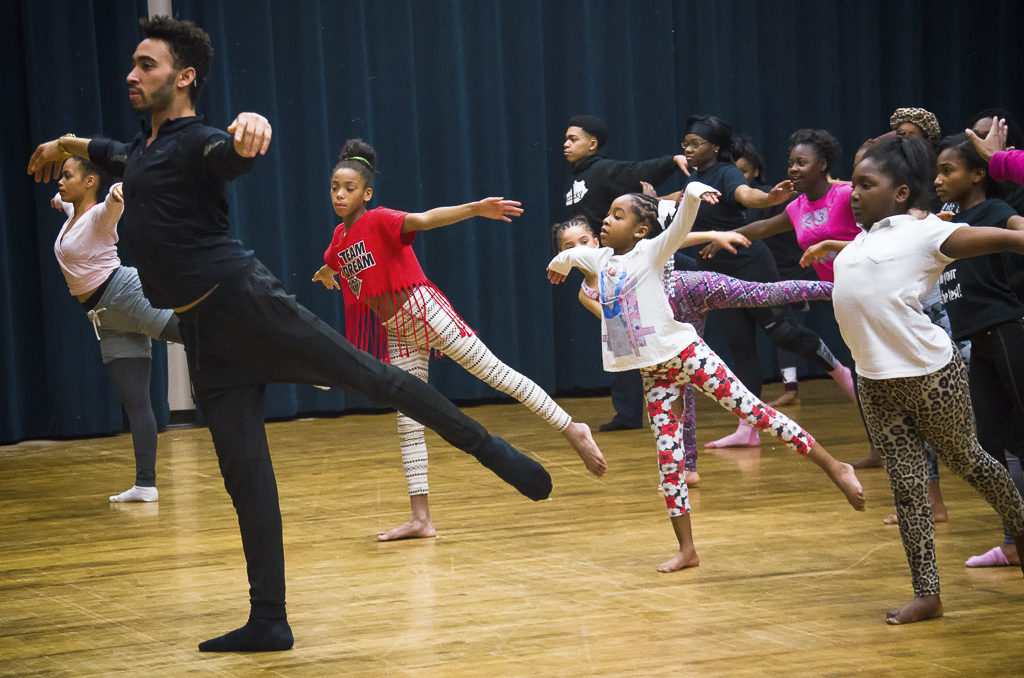 When the curtain went up  Friday night on the Brown Theatre’s stage, it revealed 11 dancers moving with stunning fluidity and grace. “Art Songs,” the first piece in a full evening from Alonzo King Lines Ballet, starts at full speed, with every dancer in the company onstage — moving, flowing, turning and jumping.

The piece ends with a moving pas de du between Yujin Kim and Michael Montgomery. During bows, Kim and Montgomery received especially-vocal support from the appreciative crowd.

Montgomery stood there, gulping air after having presented superhuman feats of movement, a dancer at the top of his profession.

Just over 24 hours earlier, he was standing in a room with 26 kids, most of whom are from The West Side of Louisville. The kids are all members of the ArtsReach Dance Ensemble. The ensemble, a small piece of the many programs offered by ArtsReach, is a five-year-old program aimed at giving free dance training to underserved kids in Louisville.

I would say that the chance for these kids to get a workshop with a top-level dancer like Montgomery is a once-in-a-lifetime experience, but through ArtsReach, and the programming department at The Kentucky Center for the Arts, it happens several times a year, as almost every dance company that comes through town makes time to give workshops to the community.

While it might not be as splashy as a big Broadway musical coming to Louisville — like the visit we’ll have from “The Little Mermaid” later this month — these workshops offered through the KCA and ArtsReach have always struck me as being what really makes our arts community special.

It’s easy to see the Center as a place where a $35 ticket is on the cheaper side, a place you have to have a couple hundred bucks to shell out if you want to visit with your family.

Julia Youngblood is the director of ArtsReach, and she was on hand Thursday to observe the workshop. She talked about her program’s mission while kids warmed up and played and conversed in the background, waiting for their class to start. “ArtsReach is a community arts program that works with community centers and provides access to the Kentucky Center,” said Youngblood.

In addition to offering these workshops, ArtsReach offers tickets to the kids, at the cost of $3 apiece. While it’s always good for kids to see art, Youngblood pointed out, a special aspect of the workshop/ticket combo: “The other aspect of this residency is for the students to work with a company and then go to the performance tomorrow, and be able to see that dancer onstage, know that they’ve had a connection with him.”

Youngblood introduced me to Montgomery, who was warming up and chatting with the braver kids. The 25-year-old dancer is originally from Long Beach. In addition to dancing for Alonzo King, he trained with Alvin Ailey, another company that offered a workshop to ArtsReach this year.

Though he’s soft spoken and kind of sweet, Montgomery carried himself like a dancer, and you could see the strength and control in every step or shrug. Despite the obvious technique, what he wanted to teach the kids wasn’t all about the pirouettes.

“We’re gonna  play around… get to know ourselves a little more. At Lines we’re a big believer in freedom and your personal expression and your personal voice. I feel like that gets masked in dance, and people believe in this facade, this cookie-cutter dancer who can execute X amount of steps perfectly,” said Montgomery.

Later on, after a brief warm up, Montgomery is leading the kids in some improvisational-based movement. The kids stretch and reach high, and then melt, and then un-melt to stand again. During this portion of the class Montgomery uses highly-figurative terms and descriptions to encourage free and fluid movement from the dancers. It’s a far cry for the rigid French of the technical terms in ballet, but that makes sense from a contemporary company like Lines.

But for every dancer, technique is important, and the kids are learning plenty of it in their regular classes, which they attend twice a week at the Shawnee Arts and Cultural Center.

Their teachers, Portia White, who teaches ballet and modern, and Marcellus Love, who teaches hip-hop, are both on hand for the workshop. Both have worked with the ArtsReach ensemble since its inception.

White says the workshops are eye-opening for the kids. “They can see outside their immediate, you know? So they can have exposure to national companies, different perspectives on movement.” White says it also gives the kids the chance “to know that ballet and technique is important — just coming from an instructor’s perspective, it just validates what dance is, and that it’s way bigger than Shawnee Arts and Cultural Center.”

The kids need to see that, because, of course, some of the kids don’t always stay quite as focused as White would like. Before the class on Thursday, some were not taking the opportunity — or the technique — seriously. The ensemble serves kids from sixth to12th grades, so there are times when some of the kids are just acting like kids. There was one group of the middle schoolers who were just turning up a little Beyonce and dancing for fun instead of focusing and warming up, and that’s pretty reasonable. Dance can teach focus, poise, dedication and hard work. But it’s a process.

The older students got ready for class in manner that suggests they know exactly how great this opportunity is.

Holman — a journalism student at Manual — talked about what the workshops mean to her. “Most of the time, it is different, because they like to bring in different professionals who can teach us different things, and we take it back to class, and we apply that to our classes. I think it’s a great opportunity.”

Williams echoed White’s statement about how the dance ensemble broadens her horizons: “We’ve performed at UofL and we’ve done a lot of performances here (at KCA), and we also went to the Brown Theatre. [We get] the opportunity to perform different places, and perform for different people, and meet new people.”

When the adults in the room talk about giving these kids opportunities, it’s often with an eye to the future. And while the three high schoolers I interviewed seem to grasp that aspect of their workshop process, they also spoke to a more immediate effect of dance on their lives.

Hillman, the freshmen at Male, actually had to stop taking class for a couple of weeks due to an injury. She says being out of class was emotionally taxing: “My mentality was broken, I was really stressed out, and now I’m back at dance, it’s calming me down.”

It’s sort of an echo of a statement by Montgomery. I asked him what he gets out of teaching masterclasses like this one. Surely it’s taxing while in the middle a a tough tour to take time out to teach. He answered immediately: “Personally it fills me up. It’s giving back, and point blank, it’s giving.”

In a world that too often wants us to find some economic justification for the arts, it’s beautiful to hear the same sentiment coming from the mouths of kids just starting their journeys and a professional at the top of the game: Dance feeds the soul.

The evening of the show, I saw Holman, Williams and Hillman at the Brown Theatre.

They paid three bucks each for their seats, and sat surrounded by people who paid ten times that. But when Montgomery finished his amazing pas de du, and stepped to the front of the stage to get his well-earned applause, they saw a person they knew, who was not only successful, but also cared enough to give some of that success back for the sheer joy of doing so.

It’s probably impossible to put a price on that, but thanks to the ArtsReach Dance Ensemble, it’s a price these kids can easily afford to pay.