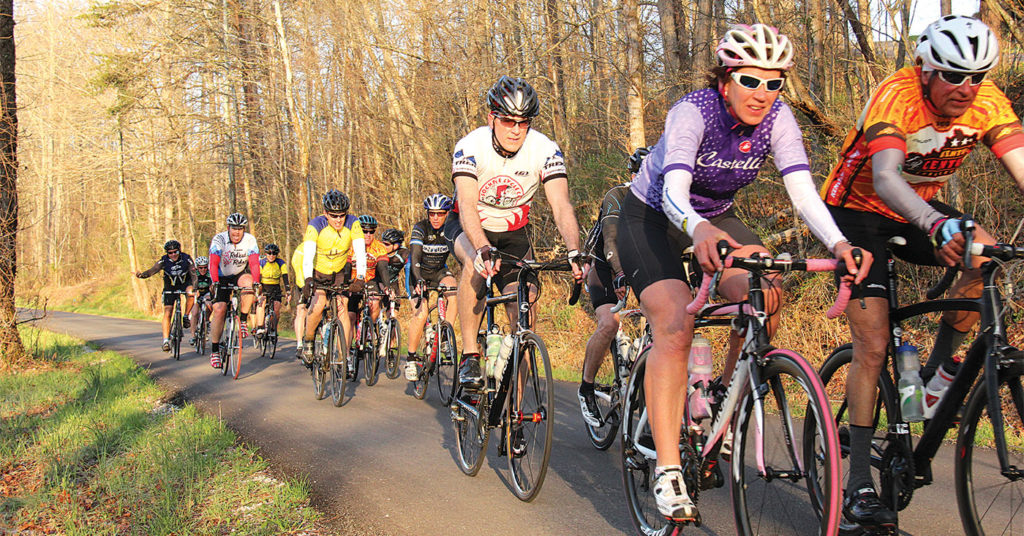 Cyclists on the Redbud Ride | Photo by Craig Dooley

It’s the time of year when cyclists get motivated. Whether you race, tour or just plain ride a lot, regardless, you’re packing in the time and the miles. Base fitness and endurance is what you’re after when, day after day, three to six days a week, you try to squeeze out enough time to suit up and ride outdoors, or jump on the trainer for an indoor riding session. Why does the cyclist need to ride base miles in January, February and March? Because, when racing and touring season begins in April, you will be ready for the miles and intensity that are sure to come.

We do it only because we love it, and we are drawn to it. Whether you’re just starting out, or you’ve been riding for years, we have one thing in common with each other: desire to ride.

I raced road and off-road for most of the ‘90s and began enjoying the tours starting around 1993. While I don’t race in any official capacity anymore, my primary focus is to ride as often as I can, to the best of my ability. I just like to have fun, while pushing myself physically. Tours can be ridden at whatever pace you want — there is no pressure other than finishing with a smile on your face. If you feel the itch for more of a challenge, there will be plenty of groups to up your pace with and riding together is more efficient than riding solo. Regardless, it’s common to see every cyclist of almost every age participating.

Racing aside, bicycle touring itself is a pastime born with the 19th-century dandy-horse machine (or hobby-horse), which was light and had two wheels, but the strider (or rider) kicked it down the road, or coasted down hills, then carrying it up the other side. By the 1820s, some riders were traveling longer distances for adventure. Later, in the 1870s, pedals were added to the larger front wheel (penny farthing), and in 1880 the safety bicycle (both wheels being the same size) was invented, making it much safer, capable and efficient. One of the first things cyclists did with this new bicycle was to see how far it could take them. And they did go far!

Today, in Kentucky and Indiana, bicycle tours are as common as bicycle clubs or the groups that organize them. Some events, such as The Hilly Hundred in Bloomington, Indiana, have been around for decades, rolling into its 50th year, or the Red River Rally in Slade, Kentucky, at 48 years. Mileage and difficulty vary to make the events all-inclusive. Beside the scenery they often boast, they all represent a theme that helps draw the participants they attract. The tour organizers make the deal sweeter with occasional SAG stops (an acronym for support and gear) that offer snacks, lunch, water, energy drinks, restrooms, live music, even dinner at the end and SAG support, with a series of motorized support vehicles to help with mechanical, directional or physical issues as needed.

Raise money for a good cause, enjoy a sense of epic adventure, the safety (and challenge) of riding with others in an urban setting, recreating yourself in the tranquil beauty of deserted rural roads, the feeling of accomplishment while rolling into the finish of a century and the camaraderie (barring any mechanical issues), as you enjoy and go the distance together. We help each other in a bike tour, in so many ways. These are just some of the reasons why I enjoy tours, and why I look forward to them every year.

Preparing for a tour means riding your bike at least three days a week and at least two to three hours at a time to get the best benefit (frequency is the key). And it is better to keep the intensity moderate January through March, and in April, ramp up intensity and distance in small blocks to gain performance (if desired). Make one of your days, Mondays, for instance, a recovery day after a long weekend of riding (spin easy gears and keep heart rate down for an hour). You want to practice and simulate the distance and terrain of the tour(s) you want to tackle. For example, if I wanted to ride 100 miles with over 5,000 feet of elevation gain, then, at least two weeks before, I’d want to have done an 80 mile ride with 4,000 feet of elevation gain. Don’t cram your training up to the week before your event, because you’ll end up exhausted when you need to be recovered.

The Kentucky Century Challenge and Kentucky Cycling Challenge, a promotion of Kentucky Tourism, is a series of tours in the state that are geared to increase participation in bicycle touring, and to get more people to ride centuries (100 mile routes) in Kentucky. KCC entices participants to step up their participation with the promise an award jersey after their accomplishment. When I designed the KCC logo and first awards jerseys in 2013 and 2014, I felt as a designer and cyclist, I had to earn the jerseys to wear them and feel right. I did it and the result was riding centuries with way more people than previous years. Man, it was difficult at times but riding 100 miles with 300 riders was empowering! •