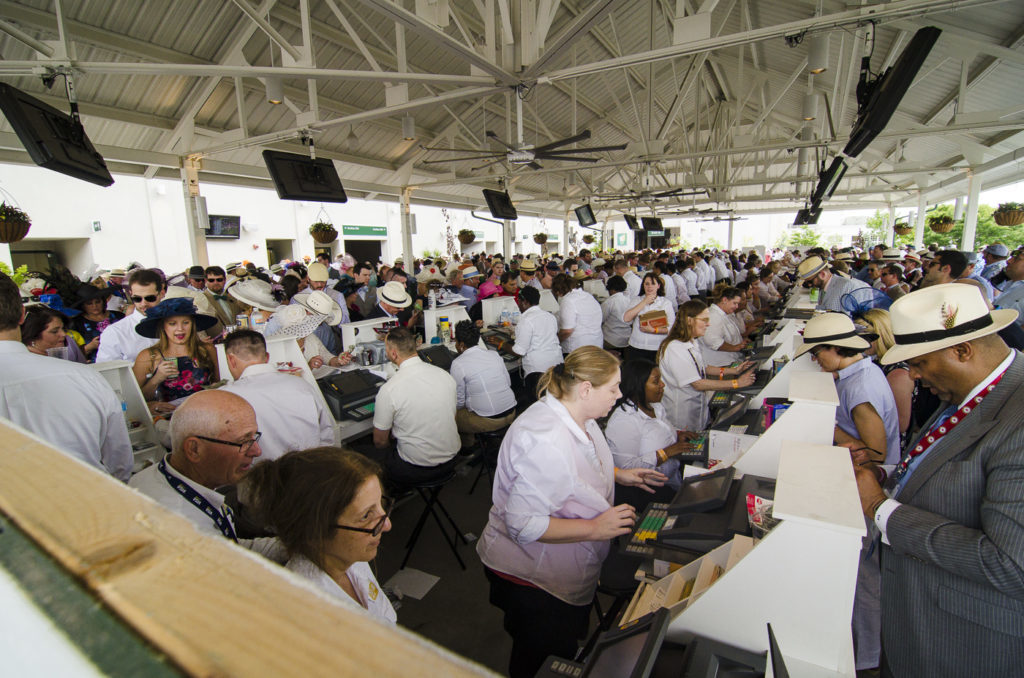 It’s still nine weeks to the Kentucky Derby, but Churchill Downs offers a Kentucky Derby Future Wager this weekend — so those who just can’t wait another day for Derby Day, like me, can place a future bet on the outcome of the 143rd Run for the Roses right now. It’s a bet that might, or might not win…

Probably not. But who cares? How much fun is it to bet on the Kentucky Derby in February?

The bet is made this weekend, with the pool closing on Sunday at 6 p.m. The winner, of course, will not be determined until the Derby is run May 6. Hence the word “future.” What you need to find is a horse, or horses, that stand a chance of winning the Kentucky Derby — and, luckily, I’ve got a pocket full of them right here. I also have a pocketful of black cat losers that have about as much chance of lasting a mile-an-a-quarter as your Uncle Fred over at the VFW.

First, we will say that the odds of winning a future bet are long. There are 410 three-year-old horses nominated for the 2017 Triple Crown series, including five fillies. But just 23 of them have a number in the betting for this pool. Numbered one to 23. You can bet the others, but the remaining 387 horses are all lumped together as one bet, No. 24. That’s the “All Others” horse. But it’s nothing you’d wish to bet a straight-win bet on, because the odds are likely to be very low. If you win, you’d earn enough for half a hot dog.

(There is one use for No. 24, however, which we will get to in the Expert Section below.)

The other problem with a future wager field with 24 betting interests: It’s not much more than the 20 you will get on Derby Day — and all 20 of those will be running. History has shown that many of the prospects in the future wager pools never make it into the race. You lose on those horses. There are no refunds if your horse doesn’t run.

So the advice is obvious: Stay away.

But my advice is Go Bet. Run right out to Churchill Downs, or get online at Twinspires.com, and take a flyer at the thing.

Because, as my friend Pebbles always reminds:

The important thing, Pebbles would explain, is to have the action. Especially Kentucky Derby action. The next nine weeks will be full of Derby news, with plenty of Derby Prep races, almost all viewable on television. There’ll be the Fountain of Youth and the Florida Derby. The Santa Anita Derby, Wood Memorial, Blue Grass Stakes — and more. They even have a Kentucky Derby prep race in Dubai, for goodness sake. And of course, there are plenty of parties this time of year, where, when a hot horse comes up in conversation, you’ll be able to say, “Oh, I already bet him in the future book. Got 25-1 on him.”

Everyone will be so impressed at how smart you must be at horse racing.

For those who wish to have it all explained, simply wave away the questions. “It’s a little complicated. Call me Derby Week, and I’ll give you the horse.”

The main question is: Who is the horse?

Well, never fear. As mentioned earlier, we have several to recommend, and will name them with their betting number and morning line odds. Some others have merit, and are mentioned, too. You can skip all the others, though. No chance.

But here are my best six. Beginning with the Three Gs:

It’s only an oddity that three of our best choices begin with the letter G. And if you’re wondering… the answer is yes, Gs have made their mark on the Kentucky Derby. Going way back, that includes 1930 Triple Crown winner Gallant Fox. In 1940, Gallahadion took the Derby for Milky Way Farm, owned by Mrs. Ethel Mars. (Milky Way and Mars, get it?) Paid $72.40. One of my first big scores.

More recently, Giacomo paid $100 to win the 2005 Kentucky Derby. Giacomo was owned by Jerry and Ann Moss, of A & M Records fame, who have Gormley this year. A pair of Gs. Gormley is fast, and has a decent female family line. Guest Suite won a Derby prep over a sloppy-muddy track in New Orleans, which I’ve noticed over the years is very similar to the sloppy-muddy surface at Churchill Downs. Nobody wants it to rain, but if it does, a mud runner could come in handy. Note: Guest Suite is entered to run in the Risen Star Stakes Saturday at the Fair Grounds in New Orleans, so if you’re considering a bet on him, you might wish to wait until after you’ve seen him run. The Derby futures pool closes on Sunday at 6 p.m.

Gunnevera is probably my top pick. I could tell you exactly why, but I don’t want Gunnevera to get out on the hot-horse radar. Next thing you know, they’d be “friending” him. Worse still, the newspapers and TV would notice him.

But we’re pals, so bet all you want.

Let’s see… Irish War Cry was an impressive winner at Gulfstream Park, though he won wire-to-wire — romping home over the Gulfstream jetstream that makes front-runners hard to catch, especially in a six-horse race. That doesn’t mean he isn’t good. Just had an easy race to begin the season. Irish War Cry’s other problem is every Sean, Heather, Paddy is going to bet him. (By the way, you do know the Irish War Cry: “Beat Cromwell.”)

Tapwrit closed well last out and looks like a horse that might be improving. Or just a horse. But I liked the way he ran. I won’t draw a line through two-year-old champion Classic Empire, even though he was thumped by Irish War Cry and Gunnevera. He’s by Pioneer of the Nile (Pharoah’s sire) and has Louisville connections that have had a lot of good horses. Also on the screen is the Bob Baffert trained American Anthem.

A good filly out west is Unique Bella. She’s not included in the Derby Futures, but we should definitely mention her. A very interesting possibility is Epicharis, a Japanese horse who earned a spot in the Kentucky Derby with a smart victory in a Kentucky Derby prep in Tokyo. He is a grandson of 1989 Derby winner Sunday Silence, out of a Sadler’s Wells mare — with an outstanding Dosage Profile. Most of the others I think are just sprinters, who won’t like the Derby Distance. A fun name is El Areeb, which means cold beer in Maltese. Nah, just made that up. Every story should have an alternative fact.

The Derby Future Wager also includes exacta betting. This is a very dicey proposition, with horses possibly dropping out before the Derby. But some of the prices will be really high. On Twinspires.com, check the possible Exacta payoffs under the Exotics button.

My advice is: If you have one horse you like, make a part-wheel with him on top, with a few others second. Then back-wheel it with your horse second.

What is a part-wheel? This is the Expert Section. Do you have a wrist band? The sharpie play is to box your horse with the No. 24 (“All Others”). If your horse wins, and some horse not on the list runs second, you win. And you’ve got 387 of those running for you.

Maybe even better: If one of those 387 not on the list wins as No. 24, you could cash by running second. Even if three horses not on the list run 1-2-3, if your horse can run along to be fourth, you win.

You might also use Gunnevera in a box with No. 24.

But for gosh sakes don’t tell everybody.