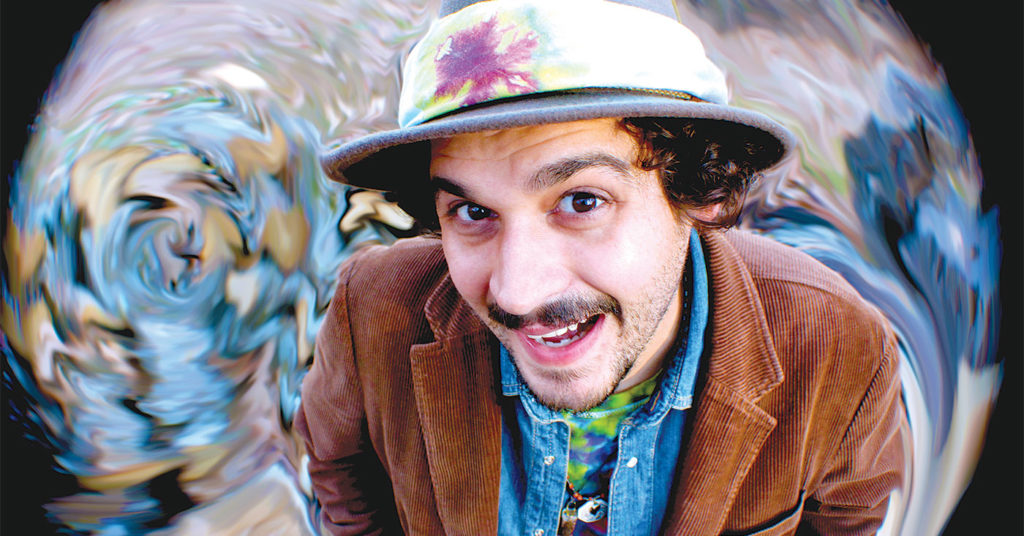 AJ Finney is a hippy. A true-to-life, self-proclaimed, jam band-loving, energy-stone buying, Volkswagen-driving hippy. He’s a Gen-X flower child with an arsenal of stories that have been featured on festival stages and television shows all across the country — stories that often get broken up by impassioned, lengthy rants he improvises in the moment. Finney is the oldest of three children from a blue-collar Irish family, in Leavenworth, Kansas. He has been performing comedy for nearly 15 years now and has found himself in shows that range from traditional clubs to head shops and record stores. He joined TJ Miller on his “Meticulously Ridiculous” tour, and has been featured on the FOX television’s “Laughs.” Finney was chosen for Season 8 of NBC’s “Last Comic Standing.” He called in from Sioux Falls, South Dakota — where he was performing at the Snow Jam Comedy Festival — to talk with us about his career, the jam band scene and his family.

LEO: What was growing up in Kansas like for you?
AJ Finney: It’s funny, I grew up in Leavenworth, which is the oldest town in Kansas. But people don’t talk about that because they get distracted by the prison. Anyway, I come from a big Irish family, so lots of drinking. We were very working class. Concrete, finish work, stuff like that — that’s what I came up doing. And we would have people passing through town who would just stay with us for a while. I remember we had a guy named Horace who slept on our couch for a while. My dad had given him a job. He stayed until he got his stuff together and then moved on.

Your comedy is narrative based. Did you come from a family of storytellers?
My dad’s side of the family was all storytellers. Very lively, animated storytellers. They were good-hearted people who liked to drink and have a good time — which meant there was always a point when things started to get out of control.

When did you think you might want to harness that family tradition into a comedy career?
Oh, man. When I was 5 or 6 years old, my mother was a babysitter. She was also a waitress at the town pub that my grandparents owned, next door to the house I grew up in. But she babysat during the day, so there would be six or seven kids around the house. We would sit in a circle telling stories and acting things out. My first bit was me doing an impression of Pee-wee Herman and Mr. T getting into a fist fight. But I loved attention. I needed it. My dad worked hard — he worked a lot. He was on the road a lot. I don’t know — if he had given me the attention that I thought I needed — I might not be a comedian today.

As someone who has performed in record stores, head shops and music festivals, do you prefer those to traditional club environments?
They’re different. The thing about alternative venues that is great would be the fact that they usually are filled with people who don’t normally go to comedy clubs. So if you just stay in the clubs, there’s a whole facet of potential audience that would never be exposed to what you do. I wouldn’t say I prefer them. I started out in clubs. I love clubs, but I think those venues serve a very specific purpose.

You can be self-deprecating in your comedy. Where does that come from?
That’s easy. I was never one to jump on other people for their flaws. So my big thing is: I look at myself for where my flaws are. If you can expose your flaws, then no one can hurt you. What are you going to say about me that’s going to bother me? Something that I haven’t already said or noticed?

The jam band scene and the comedy scene are very similar, in the sense that performers and fans alike form tight bonds with one another. Is that what drew you to both?
For sure. I feel especially now with social media, we are slowly getting away from human contact. I see a comic I haven’t seen in a while — I give him a hug. That means a lot to people. I’ve been in conversations with people I met 10 minutes ago, and it ends with a hug. I think people are forgetting how important physical contact can be. It’s just easier to detach now than it ever has been before. What’s the point, when I have 5,000 friends, but no one wants to come to my house? •