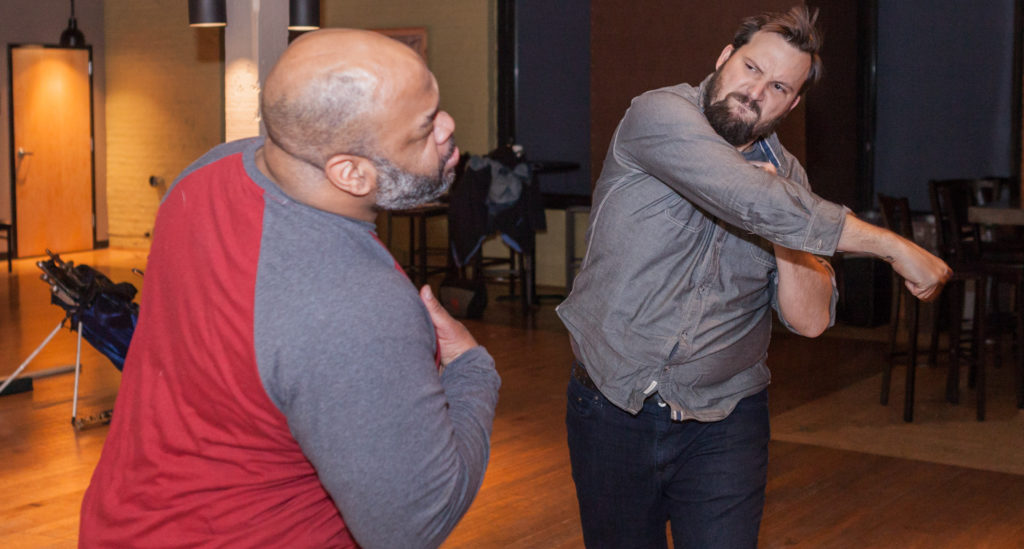 There’s a big guy standing in front of me. Fists up, ready for action. He’s maybe 6 feet 2 inches and at least 250 pounds. He’s eying me with an intense, menacing stare.

His fist flashes towards my face, my head snaps to the side and a syllable of pain and surprise bursts from my lips.

I straighten up. He straightens up. We start over.

There’s a big guy standing in front of me. Fists up, ready for action…

I first ran across Sarah Flanagan in a community meeting a year and a half back. The meeting, held upstairs at The Bard’s Town Theatre, was an open invite to everyone who was interested in talking about their hopes for creating initiatives aimed at growing the theater community in Louisville.

That meeting didn’t end up amounting to much, but, at the beginning, we all introduced ourselves, about 80 of us, giving our names and our artistic specialty.

Flanagan was new to the scene. She had just moved to town and was the only person who introduced herself as a fight director. It caught my ear. As someone who works frequently in the community, I can tell you: Louisville needs better stage combat.

So, a couple of months later, when I went to see Theatre [502]’s production of “Qualities of Starlight,” I was excited to see Flanagan listed as fight director. This would be a good chance, I thought, to see if she knows her stuff.

“Right when you meet Sarah, you get a sense just in her carriage of a confidence born out of competence,” Brooks told with me via Facebook messenger to sing Flanagan’s praises. “There is no substitute for having a pro like Sarah when you need the scene to look like mayhem but play like science. Sarah gave us just the right flavor of controlled savagery, and I hope I’m lucky enough to work with her again.”

And he’s right. Her work is good. It was good enough that, as a playwright, I asked her to work on a show I did this summer, and was again excited by the work she did.

But then, about two months ago, she started asking around, trying to gauge community interest in stage-combat classes.

But it usually doesn’t lead to much.

Which is why I was so excited to be standing in an event space above Over the Nine last Wednesday night, squared up with an actor I barely know, while we painstakingly traded slaps, jabs and roundhouse punches.

A lot of people talk about a lot of things, but Flanagan was making stage combat classes a reality.

“You hear horrors stories about people being in shows and the director saying, ‘Oh, it’s just one slap, just really slap them,’ and there are so many things that can go wrong,” Flanagan said, when we took a break from punching. “One of my teachers has permanent hearing loss, from actually getting slapped, and that’s what got them into [stage combat]. They were like, ‘There has to be a better way.’ And there is.”

Stage combat is essentially a series of illusions. Actors use the limits of human perception — like a crappy ability to judge depth — to create carefully-controlled movements that look like real violence.

And Flanagan’s right: Almost every actor I know has a story about getting slapped, kicked or punched by accident. In high school, my big brother punched a guy in the face during a production of “Bye Bye Birdie.”

In America, there’s a group of people dedicated to making sure this kind of thing doesn’t happen: The Society of American Fight Directors.

These people codify, teach and certify actors and directors. The highest rank in the society is Fight Master, and there are fewer than 20 in the nation. After six years of study, including going to grad school with one of those Fight Masters, Flanagan has reached the rank of Advanced Actor Combatant, which the society classifies as “a member in good standing who has demonstrated a high degree of skills proficiency in the art of staged combat with a considerable amount of discipline, commitment, flexibility and stamina in advanced weapons disciplines. Advanced Actor Combatants are required to pass six (6) of the eight (8) weapons skills proficiency tests, with a recommended pass in at least three of those weapons disciplines.”

“I am just getting to the point that I’m eligible for the teacher training program, and that I’m comfortable having my own classes,” said Flanagan, while speaking on the subject of avoiding those horrific moments of real violence. Flanagan said she too frequently sees completely-untrained people fighting onstage, and even worse, people with only a dash of training choreographing or directing fight scenes.

“There’s something about fights in particular, I don’t why,” she said. “Nobody goes to a weekend ballet workshop and thinks they can market themselves as a professional ballet choreographer.”

It’s funny that she mentioned ballet. She was relaxing and having a sip of water while holding a fencing foil as we talked. She exuded that same sense of physical presence that you only see in serious athletes and ballet dancers. But what she reminded me of, even more, is a martial artist. Those people who have trained so much, they seem like a coiled snake.

Of course, when Flanagan springs in to action, it’s a sort of inverse of the martial arts — she’s making sure no one gets hurt.

“You have to find ways to get better”

Let’s get back to that big, scary guy from the first section. His name is Alphaeus Green Jr., and he’s a local actor. I’ve seen Green on stage several times, but never met him before. It’s particularly delightful to see him looking all menacing and determined for fight class, because outside of punch time, he’s funny, sweet and about as far from frightening as you can get.

Despite the fact that Green has been really good in everything I’ve seen him in, he never trained as an actor. Like so many actors, he just got the bug one day, and started auditioning.

He remembers a friend forwarded him an email about auditioning for a show. This was about seven years ago. “At the time I was 32, and my thought was ‘I’m too old to not try stuff. All right, let’s go try,’” he remembered. “And I did it, and I got cast.”

Green considers acting a craft: “If you consider it a craft, you have to find ways to get better. So, here’s an opportunity for me to get a little bit better.”

This was especially important to Green because he didn’t grow up with acting or theater classes: “Especially since I don’t have the advantage of having gone through a formalized training program.”

Last Wednesday, when Green and I took the class, we were the only students. Flanagan is still building word of mouth, and figuring out how to get more students.

At the beginning of class, she had Green and I stand across from each other, and look into each other’s eyes.

“When we’re doing stage combat in general the very first thing that we wanna do is make eye contact with our partner,” said Flanagan. She launches into a little speech about eye contact, and how it’s the basis of onstage violence. She said you always wanna be on the look out for Bambi eyes — then she demonstrated this big wide-eyed look.

In addition to her physical presence, Flanagan has the patter down. She’s at ease being in charge of room, and she’s got little jokes and lessons about the history of stage combat worked into her material.

After the eye contact speech, Green and I start slowly — slowly — working our way through the basic slaps. We worked through punches, and were just starting to learn how to hold swords when the hour-and-a-half-long class ended.

It’s incredibly fun. I don’t think I can overstate this enough. And, granted, I had a great, fun partner, so no doubt some of the jubilance came from the bond Green and I were forming as students. But there’s just something wonderfully childlike about pretending to beat each other up.

And it’s really interesting how quickly you come to trust and rely on your partner. It’s easy to imagine these stage combat workshops as a team-building exercise for corporate types, or salesmen. After all, according to Flanagan, a huge part of every punch or slap is selling it.

“If you don’t have good acting in your fight, it’s not gonna look like any thing at all,” said Flanagan, while coaching us on the timing.

The acting component is the reason Flanagan prefers the term “fight director” to “fight choreographer.”

“You can’t come in and just throw down some moves. You have to give the actors acting notes, and you wind up directing the bit of the scene in which the fight occurs,” said Flanagan.

It’s just another way that you know Flanagan’s a pro: She slid little acting lessons right in alongside the physical stuff of the class.

But at the end of the day, it’s all about safety.

A couple years back, the Society of American Fight Directors were in talks with Equity — the actors union — about trying to form an official relationship. While this was going on, the society combed through years worth of accident reports, reviewing all the times that professional actors had gotten hurt on stage.

“The two most common accidents they found were slaps to the face and stage falls. And those are both really easy techniques, if you’ve studied them and know how to do them properly,” Flanagan said, shaking her head. “Those are so, so preventable.”

Flanagan’s class is ongoing, and designed to be welcoming to both newcomers, and experienced students. If you’d like to sign up for class, or even book Flanagan to do some fight choreography for a creative project, email her at [email protected].