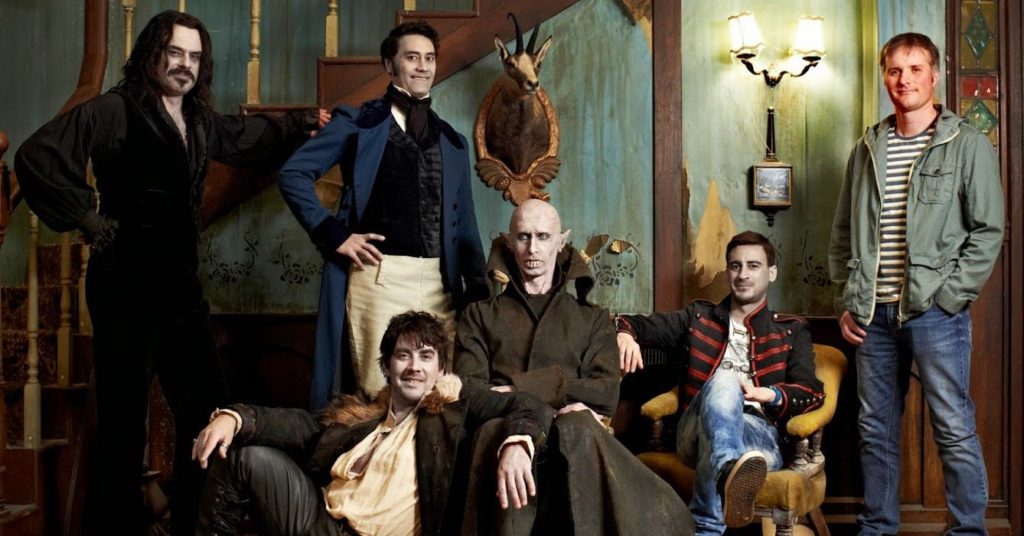 Promotional image for "What We Do in the Shadows."

Mondo Video Night: “What We Do In the Shadows” and “Flight of the Conchords”
Seidenfaden’s
Free  |  9:30 p.m.
Mondo Video Night (the weekly “high brow, low brow, cult, doc and music” video series) is hosting a “Flight of the Conchords” -themed night. The first screening is “What We Do In the Shadows,” a film by the creators of the HBO show. The film, about a multi-generational house of vampires in the 21st century, will be followed by a marathon of “Conchords” episodes.

Monday Anime: “Super Love Love!”
Kaiju
Free  |  7 p.m.
Since February is the month of love, join the New Anime Collective for a night of “top notch romantic comedy anime and delicious Japanese cuisine!” The night starts at 7 p.m. with free Japanese food prepared by Xander Stewart, followed by three episodes of “Toradora” at 7:30 p.m., and three episodes of “Yamada’s First Time: B Gata H Kei not B Gata,” at 9 p.m.

The Politics of Hair
Crescent Hill Public Library
Free  |  7 p.m.
Hairstyles (intentionally or not) are capable of transcending the world of style to become political symbols. Dr. Bruce M. Tyler, a local historian, will discuss African-American hairstyles and the politics surrounding them.

Zedd Talks
Kaiju
Free  |  9 p.m.
If you’ve ever watched a “Ted Talk” and thought “I sure wish I wasn’t learning as much,” then Zedd Talks is for you. This parody show gives comedians “state-of-the-art technology” (a clicker/laser pointer) and the chance to make jokes that “seem more important than they actually are, and you’ll nod your head like you’re learning.”

Take a day to rest, you party animal!

WFPK Jazz Live
Lola (above Butchertown Grocery)
Free  |  7:30 p.m.
Join WFPK for its first ever WFPK Jazz Live, a weekly concert series at Lola, with acts “curated by 91.9 WFPK jazz hosts and include a variety of jazz performers, each with their own interpretation of the art form.” This week’s featured group is The Afrophysicists, with vinyl sets in between by WFPK’s DJ Matt Anthony.

Flesh Crash: V Day Edition
Kaiju
$5 suggested donation  |  9 p.m.
Looking for a way to celebrate Valentine’s Day that doesn’t involve overpriced flowers, chocolates and dinners, etc.? Than head to Kaiju for a night of tarot card readings with J White and live music by DJs RAZZen’BERRIES at 9 p.m., followed by more live music at 10 p.m. with HX, Black Jaw and Coven DJs who will be casting “dance spells all night.” And the $5 suggested donation goes to Planned Parenthood of Indiana and Kentucky.

Galentine’s Day Celebration 2
Block Party Handmade Boutique
Donation (A box of tampons or pads)  |  6 p.m.
Galentine’s Day (first introduced by Amy Poehler’s Leslie Knope in “Parks and Recreation”) is a holiday dedicated to “ladies celebrating ladies.” There will be live music by Twenty First Century Fox and The Feedback, beer from West 6th Brewing, artwork by over 20 local female artists and a raffle benefitting Girls Rock Louisville (which will be on site selling its latest CD). Proceeds from the event (and the price of admission, a box of tampons or pads) go to Louisville Rescue Mission, Home of the Innocents and The Center for Women and Families.

Re-Actions: Art, Advocacy and Activism
21c Museum Hotel
Free  |  5 p.m.
Help the ACLU of Kentucky to defend your civil rights by attending this “evening of conversation where art, advocacy, and activism collide.” The night kicks off with a cocktail hour, followed by a few short talks from guest speakers on “their personal reactions to 21c artworks that address international social justice issues” and ending with a call to action on issues affecting us at a local level.

This is How We Brew It ’90s Party
Goodwood Brewing
Free  |  8 p.m.
Goodwood Brewing is hosting a ’90s party for the release of its new beer, Ice Ice Lager. So “dust off your JNCOs, slap bracelets and 90s gear,” for a throwback party with live music by Pretty Ravens who will play “all your favorite rock/rap/R&B artists and groups… and yes, maybe some boy bands.”