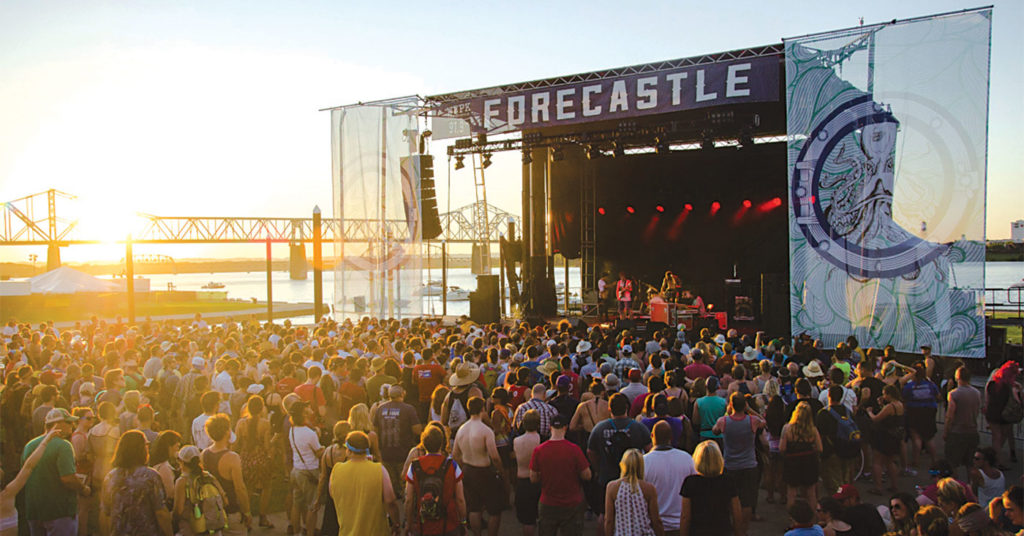 A column about the future of Louisville music would be a lot easier to write if the local music scene wasn’t already remarkably strong, with new bands and albums popping up monthly, representing a wide spectrum of genres and styles, ranging from weirdo noise punk, to unique hip-hop, to all sorts of indie rock that’s as experimental as it is catchy, to several representations of roots music’s own wide-ranging reach and everything in between. It would be a lot easier to spend this space wishing and complaining if the music scene wasn’t as prolific and continuously surprising as it is. This isn’t hyperbole for the sake of being a cheerleader. It’s my job to cover music in Louisville, and I don’t think a month has gone by in the last two years where I didn’t find something new. Regardless of that, the majority of trends in music are virtually impossible to predict anyway. It’s a shot in the dark trying to guess what genres or subgenres will be re-popularized, reinvented or combined a year out. But, there are currently trends that have yet to reach their end points. So, I think these are the most reasonable to explore:

Through the last few years, we’ve seen a influx of hip-hop artists and albums, as well as Forecastle performances by 1200 and Dr. Dundiff & Friends — which included more names than I have the space to list and resulted in another show at the Mercury Ballroom plus a full-length album. These two performances aren’t worth mentioning only because of what they meant in the past, but also because of how they will impact the future and how, hopefully, that scene will continue to grow — possibly into the national spotlight — with the increased visibility that has been created. James Lindsay (who formerly went by Jalin Roze) and 1200 (the brainchild of Jecorey Arthur) are each set to release albums this month, which leads to my first prediction/hope for the future: That one or both of those records travel well beyond Louisville.

There probably are too many hungry and talented artists in the hip-hop scene right now for it to fizzle out in the near future, but things like this are fragile and can always go one of two ways. It’s really a pick-your-own-adventure type situation: Give them your attention and money, and you’ll probably see it continue to trend in the right direction.

Although at least one DIY venue shut down in the last six months, there seems to be a few more popping up and/or starting to gain some momentum. I’m not going to print the names of these places, because of recent police crackdowns across the country. I’m not trying to get anyone in trouble. But keep your eyes and ears open. You’ll find them. And, when you do, support these non-traditional shows at houses and collectives and other spaces, to the best of your ability. Having venues of all sizes and ownership is a great thing for a local music scene, from the Palace Theatre and the Yum! Center attempting to bring in the sort of names that anchor major music festivals to your local punk band playing an all-ages show outside of the reach of a promoter… which I would like to see strengthen in 2017 and beyond.

When Live Nation bought a controlling share of A.C. Entertainment, the overlords of Forecastle, a concern floating around was the possibility of them discontinuing or diminishing local acts at Forecastle. A.C. told LEO on the day of the buyout that nothing was going to change, and they made good on their word: This year’s lineup includes Twin Limb, Teddy Abrams & Friends, Quiet Hollers and Jack Harlow in the first wave. And I think they will add at least one or two more local acts in the second wave. Time for hope/quasi-prediction No. 3:  Frederick The Younger, Brenda, Bird Zoo, Dundiff & Otis Junior, Jaye Jayle, Freakwater or Coliseum would all be good choices. And, per the nature of the set, I’d like to see Teddy Abrams & Friends with guest spots from locals such as Will Oldham, Jordan Jetson, The Fervor, House Ghost, Eons D, White Reaper (this will make more sense when their forthcoming album is released)… or all of them would work, but I’m sure whatever Teddy comes up with will fit. Speaking of which, this is a back-to-back booking at Forecastle for the Teddy Abrams & Friends set, and I would like to see that become an annual thing, because he and his friends at the orchestra can bend around several types of music, so each year would probably feature a mostly-new lineup of musicians. Local music fans get to see artists in a way that they’ve (generally speaking) never played in before, while it increases exposure for people from out of town.

When I moved here a few years back, there was an event featuring a panel of local musicians, promoters, journalists and publicists answering questions, telling stories, debating topics and talking about what they want to see in the future. It was an insightful, and, at times, heated, interaction with a lot of people who aren’t usually in the same room (or, if they are, it’s in a crowded concert). It was well-attended, with quite a bit of audience feedback, but it did not continue. Something similar happens every time the editor of the 33 1/3 book series comes to town — which is both an awesome project and always makes for an interesting event. But this is something that the local scene could just do on its own. I’ll mark these sort of events starting back up as a hope, but maybe it’s something that LEO should do. Writing a column only gets you so far. •