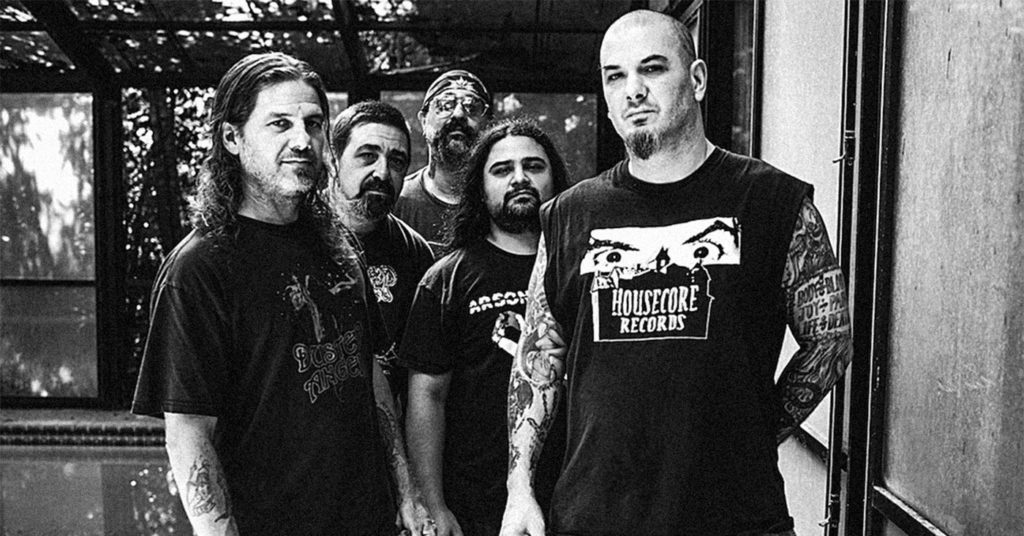 “I really thought Superjoint was just over with. And honestly in my heart, I had moved on,” former Pantera frontman and vocalist Philip Anselmo said.

It’s just days before the first leg of Superjoint’s 2017 tour promoting the November release of their first album in 13 years, Caught Up in the Gears of Application. And Anselmo is on the phone with LEO setting the precedent of our conversation: “This is obviously a Superjoint interview, but it’s also a me interview. So if we’re talking about me, I’m gonna end up talking about 27 other bands.”

Anselmo took several directions after leaving Pantera, beginning with the official formation of Superjoint Ritual in 2002, although it was short-lived. The band survived two albums before disbanding in 2004, as Anselmo moved on to form the sludge supergroup Down, perform hardcore punk in Arson Anthem and launch his solo work as Philip H. Anselmo & the Illegals, among other endeavors.

His appearance in Louisville last June shed some vital light on the vocalist’s misconstrued image, when comic Brad Sabbath conducted a 90-minute live interview with him at Diamond Pub Concert Hall — one of the few times Anselmo has ever left a stage without injury or playing any music. Returning to Diamond, Anselmo will perform with the reformed Superjoint (the “Ritual” had to be dropped, which we’ll get to later) on Tuesday, Jan. 24, with Child Bite and the extreme metal of Battlecross.

Anselmo is a multifaceted musical beast, record label-owner and overall down-to-earth human. His own outlet, Housecore Records, is based out of New Orleans and home to several artists and projects with Anselmo’s mark. The first official release of 2017 on that label is an EP co-written and produced with actor, musician “and wail of a vocalist” Bill Moseley, titled Songs of Darkness and Despair.

“[It’s] a trippy record,” Anselmo said. “It’s a different expression of music without me having to be at the forefront of everything. I got the chance to just play guitar and do a couple background vocals.” It wouldn’t be a Housecore release without help from resident label artists such as Andrew “Squiz” Livingstone-Squires the Melbourne-based King Parrot and Superjoint lead guitarist Kevin Bond — “[A] family affair as usual,” Anselmo added.

And with another solo piece brewing — “Songs that I’ve grown up and have grown up with me along the way when I first got my first four-track in 1988.” — he’s sitting on  at least five albums at any given time.

The more he talked, the more it became clear just how integral the horror genre is to Anselmo’s career, which came to reunite the Superjoint lineup in 2014.

Moseley known for his insane character roles as Chop Top in “The Texas Chainsaw Massacre II” and Otis Driftwood in “The Devil’s Rejects” and “House of 1,000 Corpses,” became a frequent guest of national horror conventions. When Anselmo took part in organizing the first Housecore Horror and Film Festival, a two-day music and film fest established in San Antonio in 2012, he found himself sitting next to Bill. “I was representing music and [Moseley] was representing horror. By the end of the conversation we realized we both had more in common than we could have ever imagined,” Anselmo said.

It came to be Superjoint headlining the second annual Housecore Fest, a last-minute decision made when he reached out to his old guitarists Bond and Jimmy Bower (also of Down).

“To my surprise they were both very open to the idea,” he said, adding that Warbeast drummer Joey “Blue” Gonzalez and bassist Stephen Taylor were recruited to complete the pack. “And with that particular group of guys it was very low stress, very high competence.”

The album is a hardcore battle inside mortality vs. technology, reality vs. context, sounding like a reaction to the modern age of manufactured outrage, which had left him inadvertently damaged, although not beyond repair.

In regard to what to expect from the live show, Anselmo once again sets the precedent: “It is truly plug in and go. No bullshit about it. No fucking image. No puff. No big stage set-up. No big giant production. We play to the strength of our songs, and that’s it. As it should be.”

Editor’s Note: This article, which ran in the Jan. 18 issue of LEO, should have addressed the racist comment that Phil Anselmo made at Dimebash last January. For further reading, click here.