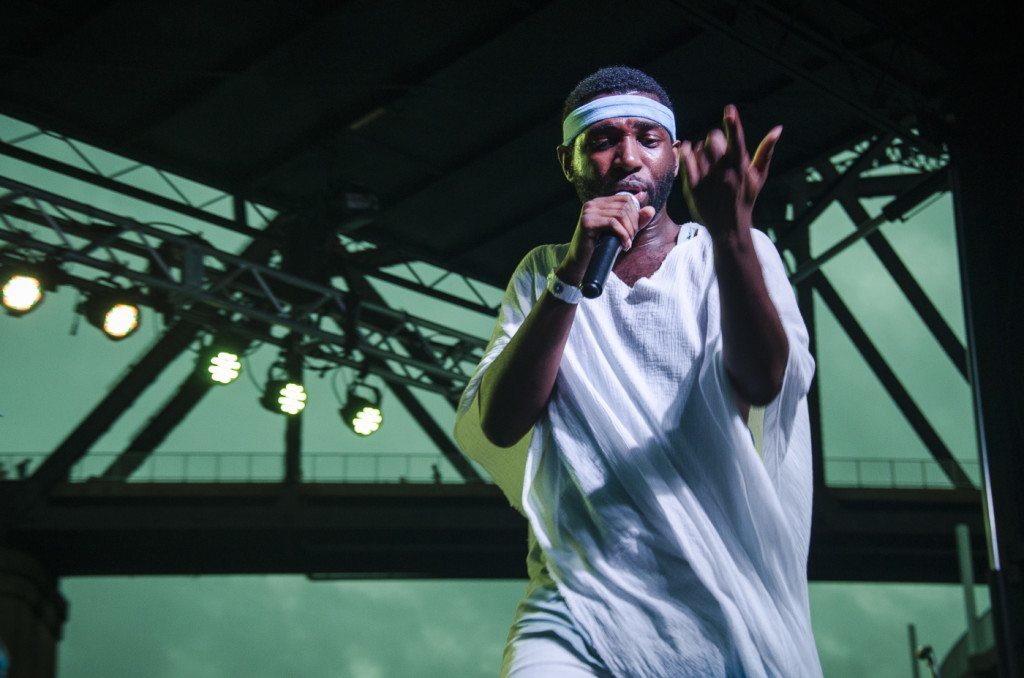 For last year’s Forecastle issue, we profiled Jecorey “1200” Arthur in the cover story, so this time around, we asked him to break down his forthcoming debut double album Séance/Spirit — a concept album that explores the duality of the darkness and light that follows us through life. His insights offer a view of the songs and the themes. Here’s what Arthur told us:

“Welcome” is the ghoulish beginnings of your trip to another realm. Our story is narrated by 1200’s great-grandmother, Peggy Arthur (b. 1934). Over an eerie Grand Kaiser track, we are welcomed to the journey of “a young black man.”

“Hymn” is the introduction of our character, 1200, a split soul on the fence about place and purpose in life. I used my voice as an instrument as it croons over Nick B’s electric piano in an entirely improvised fashion.

“Twenty” paints the picture of our narrative — urban plight being the key to self-destruction or self-motivation. Here we travel through the teenage years of life, urban myths that surround them and the downfall of young black men.

“Slain” highlights what was unfortunately the most heartbreaking epidemic of 2016 — police shootings. Our character narrates the events of several incidents before interpreting one himself through the eyes of Michael Brown, shot in August 2014 by a police officer. The lyrics were inspired by an article about the final words of slain victims.

“Séance” serves as the theme for the album — longing to communicate with those who are no longer alive, whether that be literal, metaphorical or a combination of both. “Séance” features guitarist Zach Groves and rapper Metez while our character shrieks in the background.

“Abyss” shows our character in shambles — isolated and defeated by the desire to not live. The story quickly turns for the worse as our character slips into the depths of hell.

“Problem” is the Earth’s core filled with evil and demons. 1200 is an untamed beast labeled as “a problem child” by many, including children from his life (e.g. Hite Elementary Jam Band singing a creepy Halloween cannon during the second half).

“Skeletons” represents subconscious thoughts and confusion within our character. The narration and voice of reason (educator Bryen Warfield) is haunting 1200.

“Slumber” is a glimpse of our character’s nightmares. He is being haunted by something unhuman and heartless, but might not even be human himself. Greg Brown is the only vocalists here, singing, “Sometimes I feel like I’m unreal.” I wrote this song in the tenth grade.

“Goddess” serves as the solution for 1200 and the world’s issues — love. He admits to losing his faith in a higher power, and begs for forgiveness, with the help of pianist Teddy Abrams and singer Otis Junior.

“Resurrection” takes us back into the desire of reaching people, dead or alive. Tyler Dippold sings a chilling introduction before we launch into a fiasco of sounds (e.g. glockenspiel and trap drums). 1200 begs to bring lost souls back to life, but soon realizes he is as lost as they are.

“Dance” is our acceptance of death and celebration of life. With the help of Cheyenne Mize and my 8-year-old brother, Kamrin, we dance in harmony on “the best night of our deaths.”

“Fly” was written in-flight on what felt like the pathway to heaven. 1200’s great-grandmother, Peggy Arthur (b. 1934), introduces this new realm as our character welcomes us to “the temple of dreams.”

“Reincarnation” is where our character becomes his true self — mere sound. This is first of three marimba pieces written on Spirit. It parallels the melodies of “Resurrection” on Séance, but has a much lighter and subtle approach.

“Narcolepsy” is a flashback to the mind of a young 1200, playing with Legos, Gameboys, and naïvely fighting sleep. It takes place in both a dream and a nightmare but represents the innocence of children.

“Skin” is the proposal of love. Our character sings from the perspective of someone who has never experienced love, but quickly becomes fond of it. The entirely-improvised piece is supported by keyboardist Nick B and vocalist Tyler Dippold.

“Solution” is the second of the three marimba pieces on Spirit. It borrows the melody heard on “Problem,” but in the major mode and is stripped of all other voices, instruments or distractions. The piece is an offering from our character to solve the world’s issues.

“Silence” is adapted from an old 1200 song with Dong-Joo Hwang, “Positive Vibes Only.” Contrary to the title, the song advises us to not be silent in moments of adversity.

“Devil” has us rejoicing in a holy place. The refrain is inspired by an old gospel song I grew up hearing in church. Here our character casts away demons of the past (i.e. Séance).

“Immortal” is the final marimba piece, and the most legato. It smooths melodic ideas that seem to last forever before leading us into the actual afterlife many of us fear.

“Alive” is adapted from a song I wrote with old bandmates, “Grease Trap.” It has since then been performed by The Monolith. This version is quite different in subject matter and approach. The lyrics depict the life of a man who dies and becomes a lost ghost.

“Peak” used to be known as the Louisville City Football Club Anthem, but has since then been turned into an anthem for all. The song represents reaching a mountaintop or goal and feeling triumph. Following a strong chorus from Cheyenne Mize, we hear drums for the first time on the album. This paired with the repetitious chants symbolize victory.

“Secular” is a reflection of life following the peak. I ride over Nick B production with help from singer Jacqui Blue. Though the content deals with every day social, political and racial issues, the sentiment is that we can rise above those because we are “way up on cloud 12.”

“Goodbye” is the closing statement for Séance & Spirit. 1200 wishes us farewell and promises you will still hear his voice even in his absence.