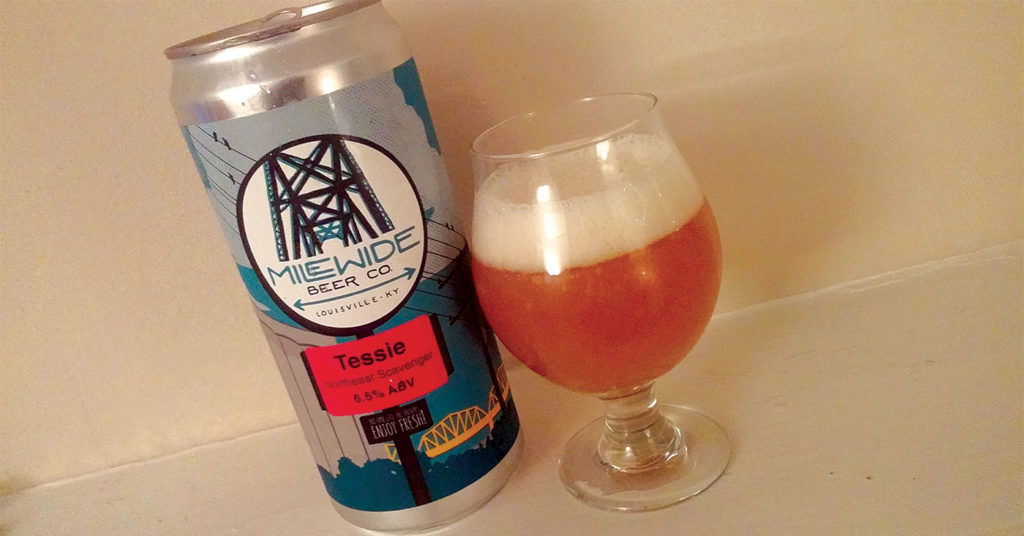 Did you get yours? Mile Wide Beer Co. has only been open a few weeks, and already it’s blowing up Louisville. One week into its existence, and it released an East Coast IPA called Tessie that pretty much broke the local craft beer scene. Word of the stuff swept through social media, and had people coming in droves to buy crowlers of it.

Scott Shreffler, co-owner of Mile Wide, told me on day two of the beer’s release that he and his crew had filled 12 crowlers for release day — they were gone in no time. So, they filled 36 more. Gone. They decided to fill 50 more, and sold those as well.

It’s gone now — although the brewery promises it will return someday — but why did Tessie fly off the shelves (and out of the taps) that way? Well, in part because it was a damn delicious beer. Mile Wide knows what it’s doing. But it’s also because a Northeast IPA (or East Coast IPA) simply isn’t a style we’ve seen brewed here in Louisville. As far as I know, Mile Wide was the first local brewery to release a version of the style, which is hop-forward like most IPAs, but focuses less on bitterness and more on the nuances of the hops. Sort of a kinder, gentler IPA.

I bought a crowler of Tessie on day two, and ended up going back to the brewery a few days later. As I sat there enjoying my pint, a guy sitting at the bar next to me finished off a second pint of Tessie, and then bought four crowlers of the stuff.

Anyway, Tessie may be gone, but Mile Wide will keep things going with Tuck Rule, another IPA from the brewery’s Northeast Scavenger series. It may just break the scene the same way Tessie did; either way, I’ll be curious to see which Louisville brewery will be next to brew the style. But you can bet it will happen.

Goodwood Brewing Co. is about to roll out its Rare Wood Series, a series of — as they phrase it — “our most elusive one-offs.” A Jan. 21 launch party will debut five of these experimental beers, including Ruby Red Oz, a port wine barrel-aged ale, which will be available exclusively in 500ml bottles.

The release party is 2-6 p.m. at the Goodwood taproom on East Main Street, and admission is free.

Flat12 Bierwerks still isn’t brewing in Jeffersonville (the beers come from the home Indianapolis brewery), but the taproom on the riverfront is still going strong. To celebrate two years at the location, it will host a beer festival Jan. 28 during which a host of interesting barrel-aged, sour and other specialty beers will be tapped. You like Pinko Russian Imperial Stout? It will be there. Winter Cycle Double IPA? Yep.

There will be 30 such beers tapped. For $30, you can get unlimited three-ounce pours, as well as a free Rastal Teku commemorative glass imported from Germany. There will even be live music by the Rounders. The event is noon-6 p.m., and tickets can be purchased by visiting flat12.me.

Holsopple Brewing announced recently that it will open Feb. 21 in its small space in Lyndon. Located at 8023 Catherine Lane, just off Lyndon Lane.

The brewery reported in mid-December that it was about to start brewing beers for the opening on its six-barrel system, and announced last week that kegging would begin soon.

The first brewery to open in Lyndon, Holsopple plans to serve the surrounding Lyndon community with growlers and pints, including a flagship ale “Aloupa,” which is a mash-up of the words “A Louisville pale ale.”