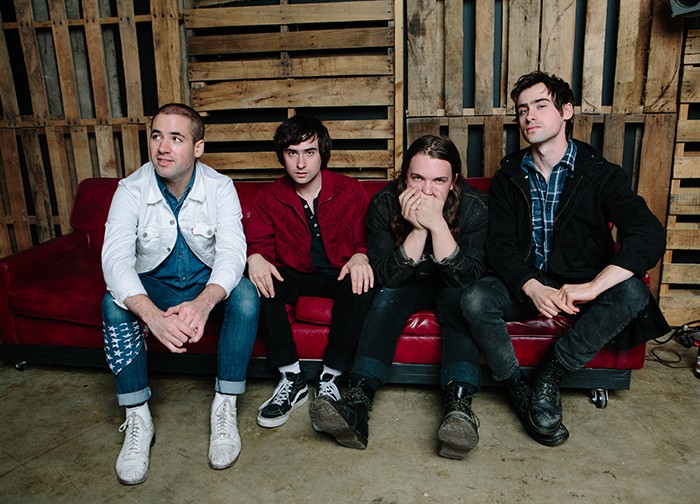 James Lindsey — “Rainbows” (ft. Cicily)
James Lindsey returned this month with the bouncy “Rainbows,” a colorful, sunny track that relishes the light, while questioning the darkness. The sub-bass here alone is the stuff of magic, the sort of bopper that you put on blasting out of your windows in nice weather, because, damn it, it makes you look good. Lindsey’s flows are on point, showing a mastery tempered by his years in the game. There is no reason that this shouldn’t be a radio hit, a panacea against the ugliness of the world.

Same/Same  — “Salvage Yards”
The stripped-down grunge minimalism on “Salvage Yards” is a welcome blast from the past, the kind that lives and dies on the tone of the guitar and the space between the beats. You can draw fair comparisons to Bleach-era Nirvana, or Crain. There is a pop quality, tempered by a vocal delivery that strikes a Slint-oriented, Louisville chord, a tradition of talking and singing that blend at an almost microscopic level. “Salvage Yards” is moody and brooding, playing on a tension that never quite gets realized.

Wicked Garden — “Pulse”
While you won’t confuse “Pulse” — off of the highly-recommended demo by Wicked Garden — with a song by Minutemen, there are certainly grounds for comparison. In both cases, each band focuses in on short, tight compositions that equally feature pop elements and punk fury. In the case of Wicked Garden, the blend of genres feels like something that has existed before, but never quite played out. Of all the tracks on the demo, “Pulse” is perhaps the biggest earworm, with giant, distorted guitar riffs, like the very best of ‘90s Sub Pop, and the type of chorus that requires a sing-along. Let this serve as an example of a band poised to make your life just a little better — don’t sleep on Wicked Garden.

Otis Junior + Dr. Dundiff  — “Why Can’t You (Just Come For Conversation)”
Theirs is a collaboration made in the heavens, between the cool confidence of Otis Junior and the playful production of Dr. Dundiff. There is an undeniable old school Motown element to what Otis Junior brings to the table, tempered by that cool, bit-crushed touch that Dundiff matches with. The bass and drum work is on point and the production is so wonderfully smooth that it’s difficult to determine if this is sequenced, or the work of a live band, a fun puzzle to unwrap on repeat listens. The keyboard has an almost late-era Led Zeppelin vibe, which is wholly unexpected, but certainly welcome, a nice texture to an already beautiful track.

Atomo — “Tangata Manu: Go Shave Your Head/Sharkbait/Vertigo” (ft. Cher Von)
There is an unabashed love for all things electronic evoked by the music of Atomo. The music is a pastiche of electro beats and fat synth sounds, of colorful warbles and playful bleep-blops. It’s that adventurous nature that informs “Tangata Manu: Go Shave You Head/Sharkbait/Vertigo,” a medley of tracks brought together via a loose sonic theme. The music has the sort of drive that puts you behind the wheel of a pixelated 8-bit Porsche, driving the streets of Malibu to save the president from ninjas. This is a love song to ‘80s gaming scores, bouncing and loaded to the brim with texture and harmony. The track ends with a nice Steve Roach-style coda that features the elegant vocal work of Cher Von, as ephemeral and haunting as ever — a nice send off to an otherwise manic piece of electronica.

White Reaper — “Judy French”
I hope you’re in the mood for some classic Van Halen-style jams, because White Reaper sure as hell is. This track has all that Diamond Dave goodness that makes you want to dress like an asshole and do jump kicks all goddamn night. I can imagine this blasting at a prom somewhere, like a kind of rowdy dance number that taps into that pop goodness in a way that’s a little too raw, but definitely just right. You want guitar solos and sweet, sweet tone? You’ve got it. Anthemic breakdowns that make you want to pump your fists at the sky? Boy howdy, you’re in for a treat.