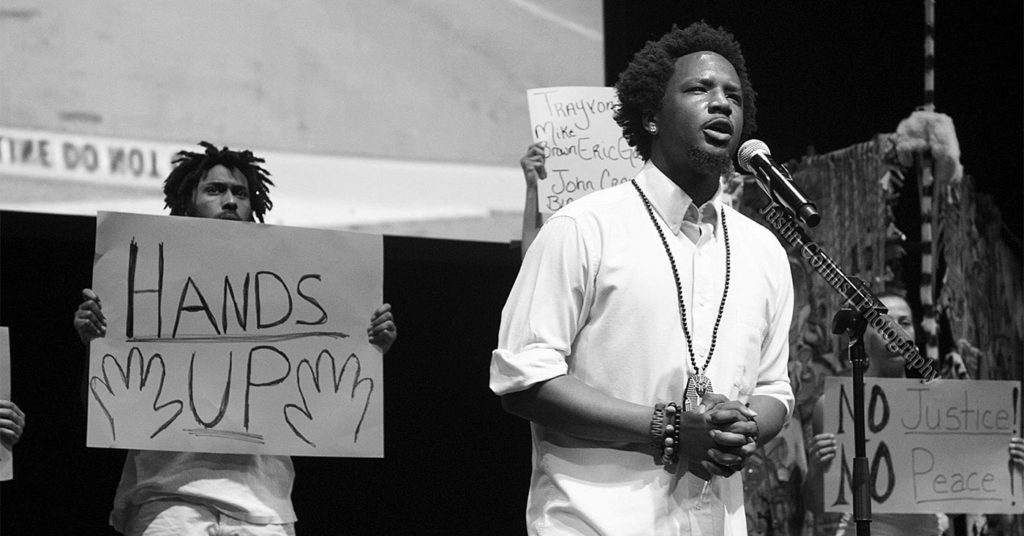 What’s in a name for the artist formerly known as Brandon Harrison?

“I want to be able to shatter all the walls, all the barriers,” said the poet and spoken word performer.

As B. Shatter, the barriers he most wants to demolish are perceptions. For example, that only an extrovert can be a performer. Or that lengthy experience is required to be a teacher or mentor. Maybe most of all, that social identity equals destiny.

“My biggest thing when I teach, specifically for black boys, is that it’s OK to be emotional, to show weakness sometimes. You can be a nerd. You can play an instrument. You don’t have to rap. You can exist in these other categories that people have said we don’t belong in.”

Encouraging African-American boys to claim a broader territory of the imagination segues into one of Shatter’s pet theories. Namely, that Harry Potter is actually a mixed-race kid. “If you notice, Harry gets called ‘mudblood.’ A lot of the rhetoric that Voldemort uses is KKK-like, and it especially suggests the idea of miscegenation,” he said. “Plus, remember that Harry’s parents got together during the Civil Rights era.”

Melding the political and the personal is important to Shatter in his work. He cites Nina Simone, Nas and “early, I mean early Kanye West,” as influences. “I feel like you need to have a message with your artistry,” he said.

For Shatter, being an artist means equal parts writing and performing. He appears regularly in slams around town (and around the country), while also putting on his own events. In mid-December, he produced his third annual Winter Soul Spit poetry slam at Tim Faulkner Gallery. A few months earlier, he performed his poetry and spoke on a panel at the Writer’s Block Festival at the same venue.

Recently, he started coaching fourth and fifth-grade boys from Roosevelt Perry Elementary in the Street Academy put on by the Urban League. “I always wanted to be a teacher, and now I’ve found a way to do that and poetry at the same time,” he said.

Today, he’s a resident of Beechmont, on the south side, though Shatter is not a Louisville native. He moved here a few years ago, and quickly put down roots. Make that wings too. A founding member of Roots & Wings when it formed in 2014, he has become one of the primary writers in the arts collective.

He also performs in Roots & Wings’ productions. Last year, Shatter appeared in “The West End Poetry Opera,” as well as in “The Blood Also Returns,” both at the Kentucky Center for the Arts.

Shatter enjoys being an ensemble player. However, the focus of his ambition at the moment is to be a standout solo success. “I want to do TED talks, I want one of my books to be a bestseller, I want to host the Grammys, I want to be in movies!”

Hollywood, we’ve got your next Harry Potter.