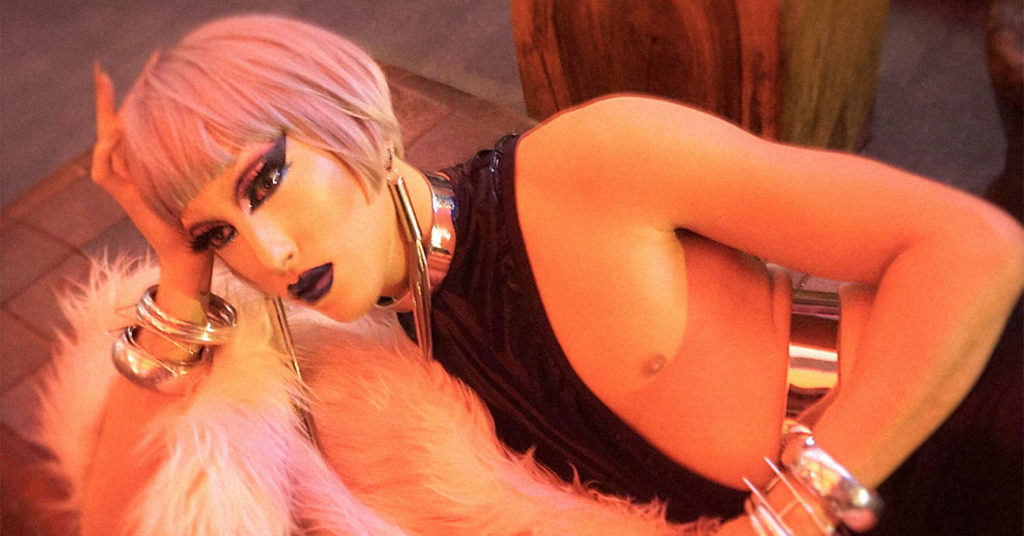 Before there were hosting gigs and drag performances as Anya Androvna, Tyler Murphy was a student throwing parties at the Memphis College of Art.

“At the time, I was studying more performative art and ephemeral art. So, I started hosting these parties in my dorm with weird themes like ‘a luau in hell,’” Murphy recalled.

Murphy’s drive to have the best costume, and make each costume better than the last, eventually gave way to female impersonation and his drag persona Anya Androvna. “She’s a cinematic portrayal of Russia. A Russian spy woman.” He chose a short, simple first name as a “reference toward iconic ‘90s supermodels,” such as Naomi and Cindy. Her last name, Androvna, is a nod to Russian royalty and speaks to the way Anya plays with androgyny.

“I don’t necessarily view her as a separate entity,” Murphy said of Anya. “I’ve always felt like I have a really strong feminine energy, and I’ve always been interested in gender as a performance.”

For Anya, Murphy creates looks that are more “conceptual than traditional” and “more thought-provoking.” Becoming Anya takes Murphy several hours. It’s when the makeup begins to come together that the switch takes place. “Once I have my base done and my cheekbones are on, brows are gone, and it looks more like her. There’s a shift in my body language and how I hold the brush, and how I move. It’s like she’s being pulled out of me.”

Murphy has quickly made Anya one of the emerging queens of Louisville’s growing underground drag scene. He name checks Bobby Kemper (Stevie Dicks), Drew Gillum, and Nate Carden and parties like “Filthy Gorgeous” at Mag Bar as staples of the scene. Anya thrives in spaces where the drag is more subversive and more immediate than the pageant circuit, where it can take months of preparation before debuting a look on stage.

Anya frequently performs in neighboring cities like Chicago and Memphis. She never does Top 40, favoring male vocals like Biggie Smalls’ “Hypnotize,” or music that is dark and moody, such as Beth Ditto and Róisín Murphy. Locally, Anya has performed at Play in the past and hosted “Daddy” at Big Bar, a celebration of men, bondage and leather. “Daddy” allows Murphy to “mix in that sense of masculinity that drag queens aren’t often associated with.” He likes, “Fetishizing [Anya] in a way that a man would be fetishized.”

More than anything, Murphy enjoys hosting events as Anya, “It’s more experiential, and you really get to meet people. I think as artists we all want to show our art and to have that experience. We want quick gratification.” He finds that with hosting, “There’s less of a disconnect between the viewer and the work of art… There’s more of an intimacy there than when you perform on a stage.”

That intimacy is one of the main reasons Murphy now favors drag over painting, “I fell in love with [drag] because I could make a piece of art, go out, and post it on Instagram and 200 people would see it in one night rather than a painting hanging in a gallery and 20 people see it on a trolley hop. It’s a different experience.” Keep up with Anya’s looks and events on Instagram and Facebook.