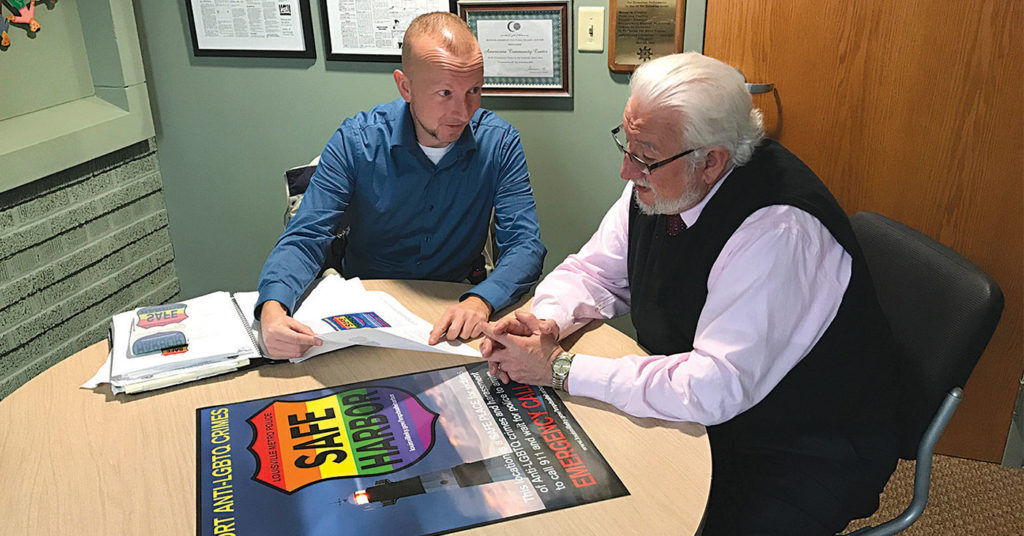 The Louisville Metro Police Department has become the first major police department outside of Seattle’s to partner on an initiative designed to fight hate crimes and bullying against the LGBTQ community. In November, the police department announced its partnership with Starbucks for the Safe Harbor project. “The idea is to create a safe place, which is being referred to as a ‘Safe Harbor,’ where a victim of any crime, especially anti-LGBTQ crimes, can come for assistance while waiting for police response,” Louisville Metro Police Chief Steve Conrad said during a news conference in announcing the initiative. About 14 hate crimes, involving victims from a range of backgrounds, were reported to police during 2016, according to the LMPD’s website.

In addition to Starbucks, other companies and organizations in Louisville have become Safe Harbors, such as the Americana World Community Center. Seattle’s success with the Safe Harbor initiative is what inspired Louisville to create its own. Conrad appointed Officer Johnny Burgraff as the police department’s LGBTQ Liaison Officer in 2015, which in turn assisted Louisville, Jefferson County with reaching a ranking of 100 percent for two years in a row from the Human Rights Commission.

To gain a deeper understanding about the Safe Harbor program, Modern Louisville spoke with Burgraff.

MODERN: What does it mean for a business to be a Safe Harbor?

Johnny Burgraff: A Safe Harbor business is one that has officially entered this partnership with LMPD, and by doing such, we’ve trained their staff to recognize hate crimes targeting LGBTQ members. When a business displays the Safe Harbor insignia, it declares to everyone that LGBTQ citizens can enter their facility under the assurance employees will report these crimes to the police. When LMPD is contacted to investigate any hate crime, they will investigate the entire situation and determine if all the elements exists to classify it as such … [The elements are outlined by the FBI as: A hate crime is a traditional offense like murder, arson, or vandalism, with an added element of bias. For the purposes of collecting statistics, the FBI has defined a hate crime as a criminal offense against a person or property motivated in whole, or in part, by an offender’s bias against a race, religion, disability, sexual orientation, ethnicity, gender or gender identity.] … Hate itself is not a crime — and the FBI is mindful of protecting freedom of speech and other civil liberties.

How did Starbucks become the primary partner in this initiative?

Starbucks is a large chain and has partnered with the Seattle Police Departments Safe Place program. They have low employee turnover, lots of customers and little red tape to get [the program] started, and we look forward to expanding to other companies. Any business who would like to partner on this initiative may contact Officer Johnny Burgraff, Community Policing Unit at 574.8868, or [email protected]

Why did LMPD feel that this was an important project?

LMPD has had two full iterations of the LGBTQ Citizens Police Academy now, and we listen to the concerns of our participants. We’ve learned that some citizens fear being targeted and don’t always feel supported if they do report it to the police. This program provides them with a support network in the community, to include direct contact with LMPD LGBTQ Liaison Officer Johnny Burgraff.