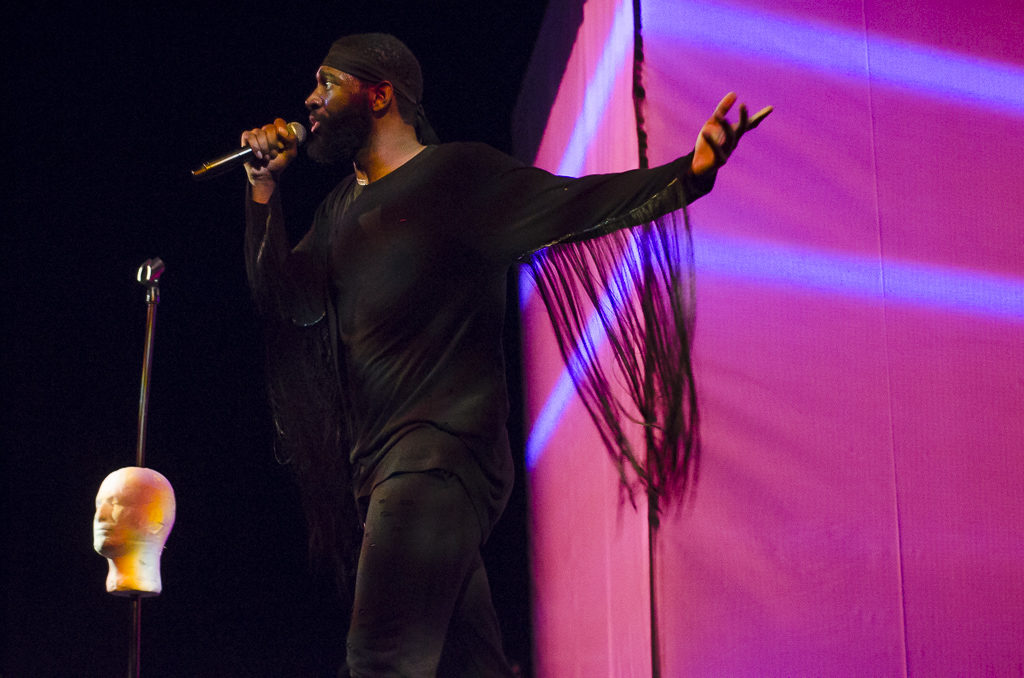 The release show Saturday for Jecorey “1200” Arthur’s double album, Séance/Spirit — a concept album that explores the duality of darkness and light told through a semi-autobiographical character — was a conglomeration of all of the different aspects of his development throughout the years, wrapped up into a two-hour, high-energy set that never lost your attention.

There was a backing band, spearheaded by longtime collaborator Nick Burke and anchored by DJ Deuce. There was a string section, adding the sort of depth and emotion and individualism that has come to represent 1200’s music. There was several other voices: Metez, Cheyenne Mize, Jacui Blue and Tyler Dippold. There were visual aspects: A light box in the center of the stage that featured rotating projections on the front, but was transparent and was also used — by two ballerinas and Arthur — to cast silhouettes from behind it. Probably the most powerful use of it was during the song “Slain” — a new track off the Séance side, written about the highly publicized case of Michael Brown, an unarmed African-American teenager shot by a police officer in 2014. Arthur’s shadow was shown behind the light box, while the projector flashed red and blue lights.

The show wove in 1200 favorites including “Rambo” and “1992,” while still focusing mainly on the new material. And, speaking of that new material, here are a few takeaways: 1) The concept shows his growth as a songwriter, using a surreal, trippy and dreamlike character-journey while tying in so many relative and pressing issues. It’s vague and mysterious at times, and also straightforward when it needs to be, and those two elements being intertwined is kind of the structure that keeps you invested in a concept album. 2) If you have ever seen 1200 live, you know the hooks to “Rambo” and “1992,” which are extremely effective in their simplicity, but in some of the new songs, such as “Devil” and “Alive” (which you can listen to here), he adds lyrical depth and new voices to those chorus hooks, making them longer and layered, while still maintaining those unshakable, catchy melodies that stick in your brain.

Séance/Spirit is an album that’s been a long time coming, and one that’s definitely worth the wait. We’ve seen 1200 in several iterations in the past, but here we see it all coming together, showing that all of that experimentation was an equation, and now we’re seeing the sum of its parts.