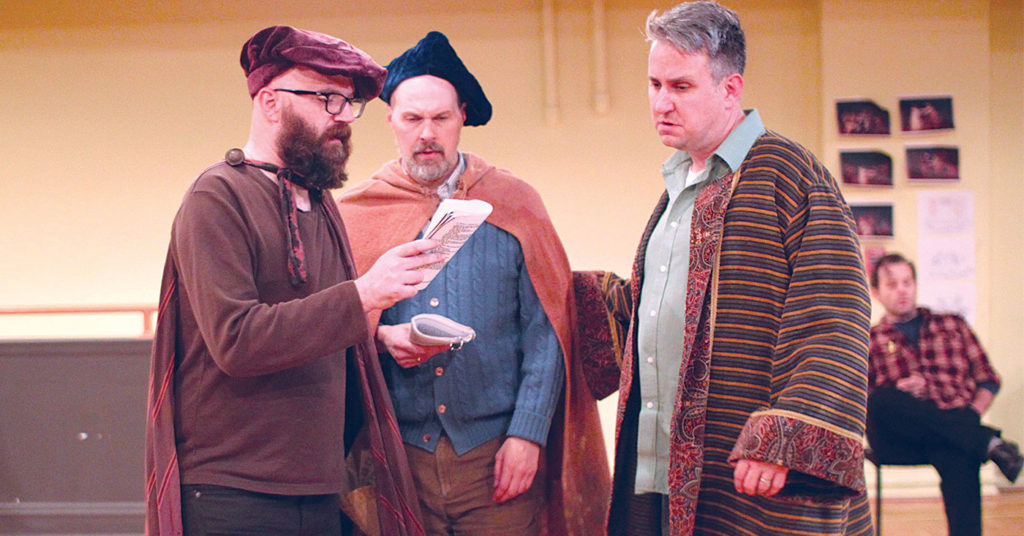 During the rehearsal of "Rosencrantz and Guildenstern are Dead," left to right: Brian Hinds, Gregory Maupin and Matt Wallace

A new year is upon us, and the second half of the theater season races in with intriguing productions from outstanding companies that over the last few years have led and inspired a renaissance in Louisville’s exciting theater scene.

Kentucky Shakespeare, best known for its summer festival, offers Tom Stoppard’s strange and brilliant comedy “Rosencrantz and Guildenstern” this week only at the Kentucky Center’s Bomhard Theater. Over the last three years, under the leadership of Producing Artistic Director Matt Wallace, Kentucky Shakespeare has added ticketed productions on its off-season months.

For audiences, this has been a boon, allowing the company to mount adventurous productions that simply wouldn’t work in Central Park (for instance, a recent production of the Shakespeare’s bloody, rarely seen “Titus Andronicus.”)

From the company’s standpoint, the longer season has multiple benefits. The ticket sales help support the regular season. And perhaps more important, offering a longer season makes it easier to attract and retain top-notch performers and technical crew. It’s a growth strategy that is already paying dividends in artistic quality, reputation and community support. If you’re not already hooked on KY Shakes, you ought to see this production just out of civic duty.

But leaving civic duty aside, you ought to see “Rosencrantz and Guildenstern,” because it’s one of the defining theatrical masterpieces of our time, and because this promises to be an outstanding production.

Director Amy Attaway is helming her first production since her appointment as associate artistic director, but she’s already made her mark as director of multiple, previous KY Shakes productions, as cofounder of the innovative company Theatre [502], and as director of a number of Humana Festival plays during a multi-year stint at Actors Theatre of Louisville.

Stoppard’s play is often described as “Hamlet through a looking glass.” The titular characters, minor figures in “Hamlet,” are central figures here. “The play narrows its focus on these two minor characters,” said Attaway, “but the rest of the crazy world of Hamlet is still swirling around them, and they’re in the middle of these intense, loud, scary events — but they’re just trying to get their footing, trying not to be dizzy. And it’s in their quieter moments that we get to know them as humans.”

KY Shakes regulars will recognize some elements of this production. The world of Hamlet — the world on the other side of the stage — is populated by actors who performed in the company’s 2014 Hamlet (Jonathan Patrick O’Brien as Hamlet; John Huffman, Claudius; Abigail Bailey Maupin, Gertrude; and Megan Massie, Ophelia). The title characters are played by Brian Hinds and Gregory Maupin. Followers of the company will be delighted to see the producing artistic director in a starring role. And they’ll also enjoy the set design, which evokes memories of the Central Park Stage House, which was recently dismantled as part of a repair and renovation project at the park.

For Shakespeare aficionados, Attaway said, the play’s delights are enhanced by Stoppard’s deft use of elements from “Hamlet” that hint at what’s happening on the other side of the stage. But, she added, even a person who has never seen “Hamlet” will have no trouble following the play. “Stoppard likes to do all the math for you. His intention isn’t to create a lot of puzzles for the audience or artists to solve. He wants to draw a very exact map and then let the actors bring it to life.”

This is not a “remount” of Shakespeare’s play, said Attaway. It’s something altogether new. Nor, she said, is it an intellectual exercise, despite its reputation for intellectual vigor. “We spent a lot of time thinking and talking about the research and ‘brainy’ aspect of the play,” she said. “But when we started rehearsing, started getting it on its feet, we really focused on the ‘funny.’ We just want to convey the story and the aesthetic of a play that feels a lot like ‘Hamlet Meets Laurel and Hardy,’ or ‘Hamlet Meets Monty Python.’” •

This is a 1986 play about the legendary jazz singer Billie Holiday. It earned Off-Broadway plaudits in the ‘80s, followed by an enduring life in regional theaters, and then, in 2014, caught fire in an award-winning Broadway production.

For Bill Fennelly, who is making his directorial debut at ATL, the play is both an intensely-personal look at Holiday, and an urgent, provocative critique of our American identity that raises questions about whether we have built a nation founded on liberty and respect, Fennelly said.

To be clear, he said, there are a couple of things the play is decidedly not. It’s not designed as an impersonation of Holiday’s speaking or singing voice. Nor is it a nightclub act. Rather, it’s a narrative attempt to get under the surface of this complex human being through the lens of an imagined performance at a crucial moment in her life.

“It’s easy to look at Billie Holiday as just a musical icon,” Fennelly said. “Or to reduce her to someone who was ravaged by heroin abuse, or a victim of the sexual abuse she endured as a child.”

But, Fennelly said, when you balance the things she was up against as black woman in the ‘30s, ‘40s and ‘50s, her life is not one of victimhood but of heroism. “What interests me is the titanic spirit of this woman,” he said. “It’s a spirit that enabled her not just to survive and endure, but to become an activist, to achieve nobility through her music, and ultimately to live her life the way she wanted live and to love the way she wanted to live.”

It’s Holiday’s formidable strength of character that attracted Fennelly to the story. But this production also gives the director (whose remarkably diverse background includes a four season stint with the New York City Opera) the opportunity to work once again Deidrie Henry, an actor he first met some 20 years ago when both were new to their careers and worked on the premiere production of Pearl Cleage’s “Blues for An Alabama Sky” (a production that starred Phylicia Rashad).

Speaking of Henry, when you see the play, take note of her dress. Said Fennelly, “The dress is a really important character in the play. Billie Holiday never leaves the stage. She doesn’t change clothes. So you get one shot at that aspect of the storytelling. That single dress has to carry lots of story, narrative and historical weight. The dress has to tell the truth about the fact that she’s performing in a South Philly club at a critical time of her life. Our costume designer, Raquel Barreto, found this final bolt of late-‘50s lace in Los Angeles. It’s exquisite, with the feel of mid-20th century lace, but with a little bit of wear and tear to it, so it feels like it’s carrying history, carrying mileage.”