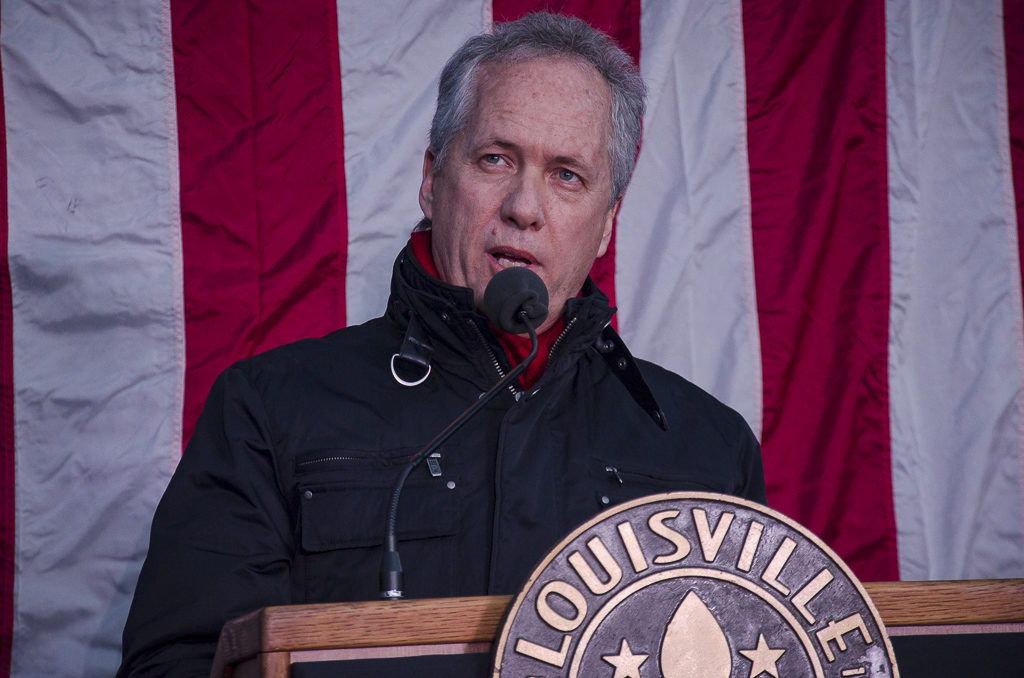 Introduced as “the mayor of the most compassionate city in the country,” Greg Fischer took the stage at Monday’s rally to address the concerned, yet hopeful audience of thousands outraged by President Trump’s immigration order.

But some left the rally disappointed — Fischer did not declare Louisville a sanctuary city, as Cincinnati did Monday. A local petition has been started, demanding that the mayor declare sanctuary in Louisville.

Shouts of “sanctuary” came from the crowd, as Fischer continued with his running themes of compassion, in a speech that seemed intent on consoling. “America’s greatest strength, is not in our capacity to intimidate but in our ability to inspire,” Fischer said. While his words inspired, little of the speech addressed the longterm effects of what Trump’s immigration order will look like in Louisville. But, he said, immigrants of all faiths and nationalities are needed to spur development and growth. “If the freedom of one group is compromised today, we are all at risk tomorrow,” he stated, reminding us that the Muslim ban runs counter to the America we know and love.

Before the rally, I asked Fischer spokesman Chris Poynter whether the mayor planned to declare Louisville a sanctuary city. “I will let his speech speak for itself,” he said.

So the answer is: No.

Trump’s move against immigrants includes a threat to strip federal aid from sanctuary cities, so Fischer’s decision would carry risks for Louisville. Still, although there is no official definition of a sanctuary city, Fischer’s declaration that police would not arrest people based on immigration status would seem to push Louisville toward being one without calling it so.

Crowds had begun gathering at the Ali Center an hour before the rally to voice support for immigrants. Like an assembly line of good Samaritans, one by one they filled the stairs and street below. The energy was palpable in the cramped space. Chants of “love not hate, makes America great” echoed in unison, as we waited for the mayor to take the stage. Protesting seemed a family affair, with children carrying their own signs depicting the Statue of Liberty and declarations of “Kids Against Trump.” Both American and Mexican flags were waved in resistance.

Countering that was a small group of protesters in military fatigues who briefly clashed with rally-goers before police intervened.

That protesters would show up at the rally underscores the nation’s schism and tension wrought by Trump’s election. Despite how well-intentioned Fischer’s reassurance was, his speech conveyed impassioned passivity—a call to not panic yet. This may not be the time to panic, but rally participants said this is the time to organize.

“I will be out here at every rally until the crazy man has been stopped,” said Meryem Kahloon, 24. The UofL law student and daughter of Pakistan immigrants believes that this is our fight. “As people, we have to stand together. Donald Trump is trying to build a wall for no reason. When something is going on that I don’t believe in, I have to get out there,” she said.

The sentiment of unity was echoed by physician Farheen Hasnain, 48, of Prospect. An immigrant herself, she considers diversity the cornerstone of American’s greatness. Having enjoyed 23 years here, she feels that things are changing and not in a positive way. “I see that all kinds of rights are being taken away. If one group’s rights are being taken away, eventually all people’s rights will be,” she fears.

“What’s going on in Washington is un-American,” said Reginald Glass, adding “it’s unfortunate that we elected a bigot as president.” Part of the problem, he said, is that we thought we had it fixed but in reality, it’s a never-ending job. Glass urged everyone to get involved and to not be complacent come the midterm elections.

Margaret Harris of Louisville and Community Connection Radio said she has stopped worrying about the character of the president. Instead, she focuses on the character of her friends. “Let’s see if we can work together on all of this madness,” she said.

If you’re ready to get to work, there are several community organizations that could use your help. Kentucky Refugee Ministries, Americana Community Center and Catholic Charities Migration and Refugee Services were at the rally to speak with anyone interested in working to make tangible results.

“The support means everything to us,” said Shelley Dewig, capacity and outreach coordinator at Catholic Charities. “To have people come out from all over the area and Southern Indiana, on such short notice, is amazing,” she said of the turnout. Dewig, like those from other agencies involved, hoped that more people will be moved to volunteering and advocacy.

For now, it seems the only sanctuary we have is in our solidarity.