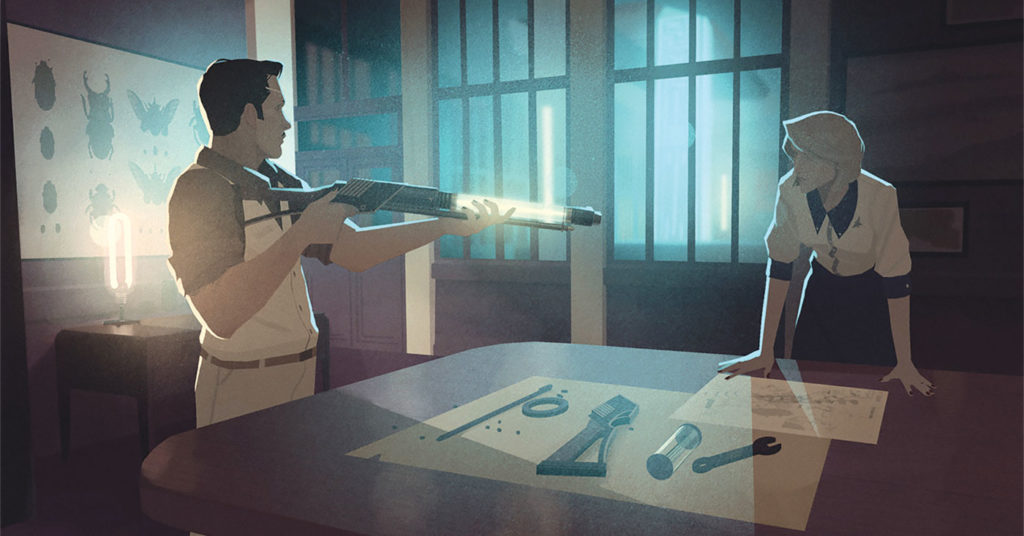 If you’ve been browsing the iTunes App Store lately, reading about games beyond simply the top-10 list, you may have come across “Dead Century.” This role-playing, adventure game has been attracting attention thanks to the stunning art created by Ray Bruwelheide, a duPont Manual High School graduate now based in New York City. Bruwelheide describes the game as an “LGBT Indiana Jones spooky adventure.” He recently took the time to chat with Modern Louisville about his career, the significance of LGBTQ characters in pop culture and his old Kentucky home.

Modern: How would you describe your everyday life as a video game artist?

Ray Bruwelheide: That seems to change daily. I have the good fortune of working for a company with a pretty ‘flat’ structure, meaning roles tend to be flexible. We have three games currently in various stages of development, and they all have different art needs from time to time. I have a few things that I’m solely responsible for, but I also get to dabble in lots of different things — from animation to character art to interface design.

When and how did you first get interested in this field?

Mostly by accident! Several years ago, I got a job in digital advertising, based entirely on my knowledge of Photoshop. I had no idea what I was doing, for the most part, and had to learn everything as I went. We made apps and websites, fairly technical stuff that was only slightly related to the illustration stuff I had been doing. Later, I was able to combine all that technical knowledge with my more traditional illustration skills and create a niche for myself as an art/tech hybrid.

How did you infuse your latest game with an LGBTQ tilt?

That was a personal project that ended up being a big melting pot for everything on my mind at the time, one of which was representation of minority groups in popular media. One of the main characters is openly bisexual, and the player has the choice to customize several other characters with various gender and ethnicity options.

Why was it important to you to include an LGBTQ element?

LGBTQ characters aren’t as rare in popular media these days, but their existence is still often too focused on their gender or sexuality. Gay people don’t have Gay Breakfast and go to their Gay Jobs and have Gay Adventures. The personal lives of the characters are depicted, but it isn’t the main focus of the game.

When did you leave Louisville?

Right after I finished high school.

What do you miss about the city?

Trees. New York has a decent number of trees, but they tend to be pretty puny. Old Louisville has some great tree-covered streets.

What do you think would make Louisville a more enticing town for those in your profession?

Honestly, Louisville is great; I’d say the rest of the state is the problem. Many of my best coworkers are gay, Muslim or simply non-white. People like [U.S. Sen. Mitch] McConnell and [Gov. Matt] Bevin haven’t exactly created a welcoming environment for people like that.

What do you think of your hometown’s recent strides and international accreditations as being one of the world’s top destinations for LGBTQ travelers?

I think it’s great, though I wish those strides had been made while I was still there to enjoy them! •

“Dead Century” is currently available in the iTunes App Store.