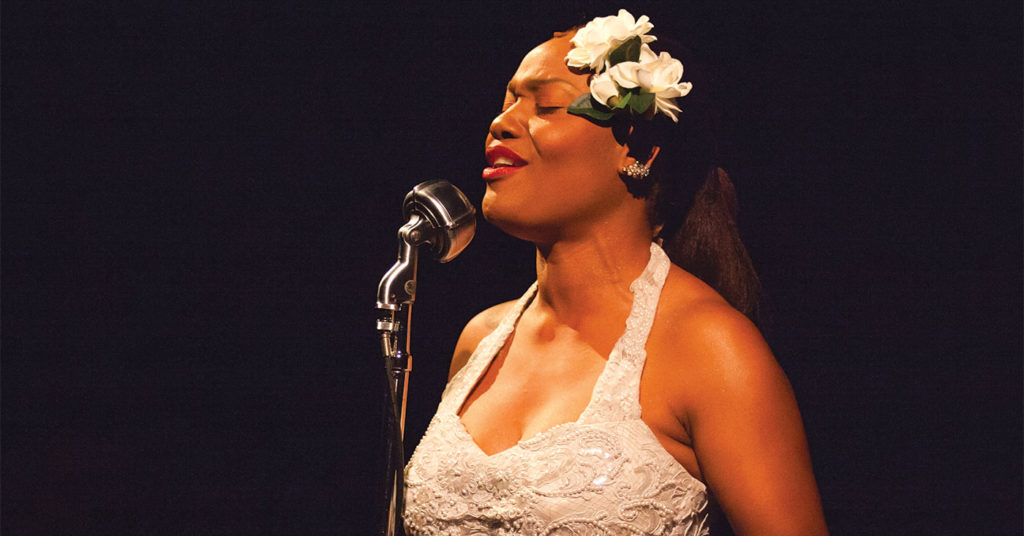 “Lady Day at Emerson’s Bar and Grill” opens to the jaunty, optimistic beat of a piano trio. But moments later, after the last chord fades away, and the pianist has walked off through a stage door, we hear a desperate off-stage voice protesting, “I told you I can’t. I can’t do…”

In that moment, it seems the speaker doesn’t even have enough courage and energy to finish a sentence, let alone express the full scope of her despair.

But something has happened during that visit. The pianist returns to his instrument, delivers a grandiose introduction, and introduces the legendary Billie Holiday with a simple three-note figure that hangs in the air like a delicate invitation. Then they are echoed by a voice that is at once wounded and powerful. “All I know,” sings Deidrie Henry, in the role of Billie Holiday. And she, too, let’s the phrase hang forever — as if perhaps there is nothing to be known. Then comes another prod from the piano, another pause. And, finally, the end of the phrase: “is that I’m in love with you.”

These are opening words of a classic Holiday song, “I Wonder Where Our Love Has Gone,” a song that over and over again repeats the phrase, “I can’t go on.”

As a piece of playwriting, it was a fine stroke for author Lanie Robertson to open his look into the life of Holiday with this song. And under the direction of Bill Fennelly, Diedrie Henry and pianist Abdul Hamid Henry (along with Chris King and Tyrone Wheeler on drums and bass, respectively) turn the song into a magnificent piece of theater. By the end of the song, this vulnerable singer has gathered her strength and her resolve and metamorphosed into a force of nature. It’s a stunning transformation — and one that introduces us to a mysterious, charismatic figure who reveals herself over the course of the play with a rare, ferocious candor that transcends bitterness and self-pity.

The structure is straightforward: The play is basically a fictional nightclub appearance (set a few months before Holiday’s death), in which stories alternate with songs. The anecdotes are by turns witty, tragic, rude and raunchy (Holiday’s hilariously funny account of a urinary protest in the Jim Crow South is a tale you’ll never forget). And the songs are superb. Henry’s glorious performance of Holiday’s signature song “Strange Fruit,” the most powerful and troubling song in the English language, is shattering in this staging, thanks to a superb performance and the genius of Paul Toben’s lighting design, which transforms Henry’s face into a tragic mask of sorrow.

Plays with biographical components are fraught with risks. Playwrights can get caught up in details and lose sight of the story. And a life like Holiday’s — the story of a human who made amazing art, despite the obstacles posed by her race and gender — can turn into a bogus magical rags-to-riches fantasy. Here, the playwright, director and actors have avoided those pitfalls. This is one of those rare pieces of art that will move you without artfully manipulating your emotions. Critics routinely talk about the emotional power of Holiday’s music — but what strikes me about her art is the restraint, clarity and lack of sentimental histrionics in her live and studio recordings. This production is a fine tribute to that spirit. •

Also at Actors Theatre this week is a one-week run of “The Tens,” which features the company’s Professional Training Company (once known as the “apprentice company”) in a program of seven 10-minutes plays chosen through ATL’s annual National Ten Minute Play Contest. It’s always a highlight for the season, an event that highlights short, innovative works by some of the country’s finest emerging and established writers, and delivers great performances by actors early in their careers.

It’s also a free event — though tickets are required and available via the ATL box office.

This year’s program features works by some writers who are familiar to Louisville audiences, including Idris Goodwin, whose 2012 tale of suburban hip-hop, “How We Got On,” was a highlight of the 2012 Humana Festival. In the years since, Goodwin’s works have been presented on some of the country’s most influential stages. Other authors with ATL connections include Emily Feldman, Lexy Leuszler, and Eric Pfeffinger — who is returning to the Tens for the sixth time.

The new voices on the slate have staged works at festivals and workshops all over the country (and beyond). They are Carrie Barrett, Iris Dauterman and Krista Knight.

ATL’s track record for discovering new talent via this contest is formidable. If you looked back over the history of the short play programs, you’d find dozens of prominent names. In recent years, names like Lucas Hnath (“The Christians”) and Jordan Harrison (“Maple and Vine”) are just a few of the writers who’ve gone on to build national reputations. Think of this as a free gift from ATL to the community. Take advantage of it. •

Finally, if you were lucky enough to catch Kentucky Shakespeare’s production of “Rosencrantz and Guildenstern are Dead” last week at the Kentucky Center for the Arts, count yourself fortunate.

If you didn’t, you missed an exquisitely intelligent and witty production of a central work of modern drama. Director Amy Attaway and a superb cast (fronted by Brian Hinds and Gregory Maupin with extraordinary performances by Jonathan Patrick O’Brien, John Huffman, Abigail Bailey Maupin, Megan Massie, and Matt Wallace, whose summer work has become an essential part of the community’s arts scene showed — not for the first time — that the quality of their work shines just as brightly in the heightened scrutiny of a more formal setting. •