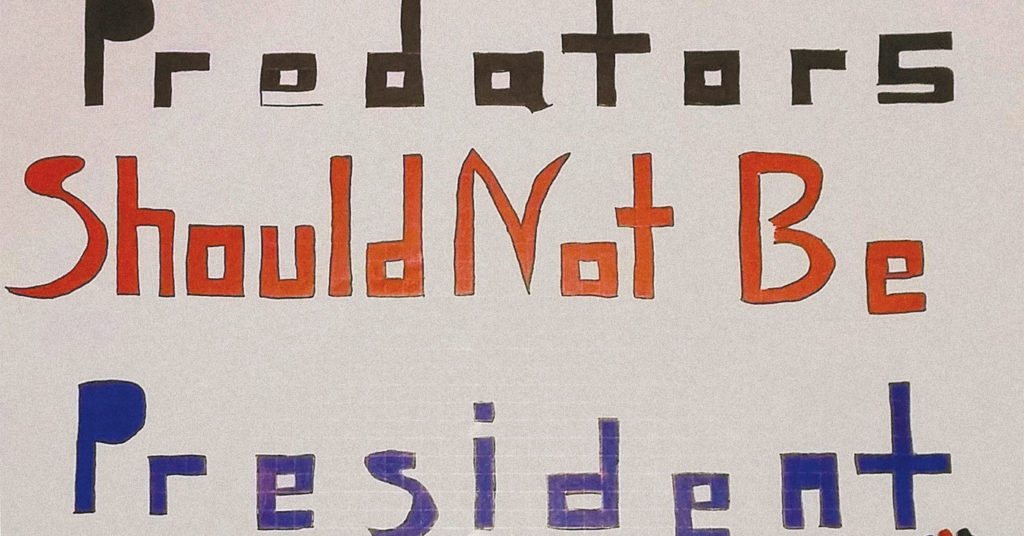 It is called the Women’s March on Washington, but Mickey McCoy, a retired teacher and former mayor of Inez, Kentucky, will be there with his wife, even though the trip will be difficult for them.

McCoy, his wife, Nina McCoy, 59, and I will be among an estimated 200,000 blue dots to make the trek the day after Donald Trump’s inauguration, showing our outrage over the toxic political climate he has spawned. The march is dedicated to women’s equality and rights for all, as well as fighting racism, poverty, homophobia, transphobia, xenophobia, Islamophobia and the like.

Having worked in domestic-violence and rape-crisis centers, I’ve seen enough to recognize a perpetrator who feeds on power and control. As a queer woman, I am particularly concerned by Trump’s appointees, most with histories of voting against LGBTQIA rights and hate-crimes legislation. So I’ll be taking an overnight bus out of Louisville that will arrive the morning of the march and return the same night.

While my overwhelming feeling is one of excitement, nervous hesitation looms. Bikers For Trump has said it will be there too, so violence is possible. Yet, I’d rather regret doing something than doing nothing. Predators should not be president.

Organizers made sure Kentucky will be represented, creating a Facebook page and coordinating volunteers and buses. Co-chair Lauren North, stepped in shortly after Kelly Smith started the state group. North brought her experience as traveling press secretary for Gabby Gifford’s Vocal Majority Tour.

“I found myself in a deep dark hole after the election,” said North, 29, who splits her time between Lake Cumberland and Louisville.

In just the first week more than 1,500 Kentuckians signed up. “The message of the march — of inclusivity, safety, rights, fairness and justice, especially for those who felt the most marginalized by the election results, spoke to so many of our state’s citizens. It’s been really inspirational to watch the group form,” she said.

With a history of working in nonprofits, Teri Carlson knows about the intersecting issues. Carlson, 32, has taken part in Black Lives Matter vigils, but not a protest as large as Saturday’s. “As I started getting more uncomfortable with the changes that were being made, I realized I had to go to the march.” With a busy career in healthcare, she’s using a vacation day.

Bethany Lambert, 35, credits her 4-year-old daughter for inspiring her to attend. “I guess I was hoping the whole conversation would implode. But, it didn’t. And now, I’m trying to figure out how to raise my daughter in a culture where presidential tweets and blunders promote the worst characteristics of our society.”

Lambert said “quiet dissent” works only when you can choose your battles. “We are all part of this world, but now we need to find ways to shape it instead of passively passing through it. We need to be the role models we want.”

Like the McCoys, who have long been active in environmental issues. They’ve taken part in nonviolent disobedience and been arrested. Nina McCoy, also a retired teacher, believes Trump misrepresented himself, particularly to those in rural areas like where she lives.

“They believe that he will represent them and bring back coal mining jobs. They do not see the danger that his billionaire cronies along with the new balance of power in Frankfort pose to the common working people. I hope the poorer communities of this nation who have been duped by false promises will join us,” she said. “I hope this march will serve as an eye opener for the seemingly blind, insensitive, racist narcissist and his misguided followers.”

As for me, I hope our collective voices will speak for those overlooked and marginalized. I will happily stomp my feet in solidarity. After all, solidarity is the only thing that is going to solve this. As the great Patti Smith sang out, “People have the power to redeem the work of fools.”