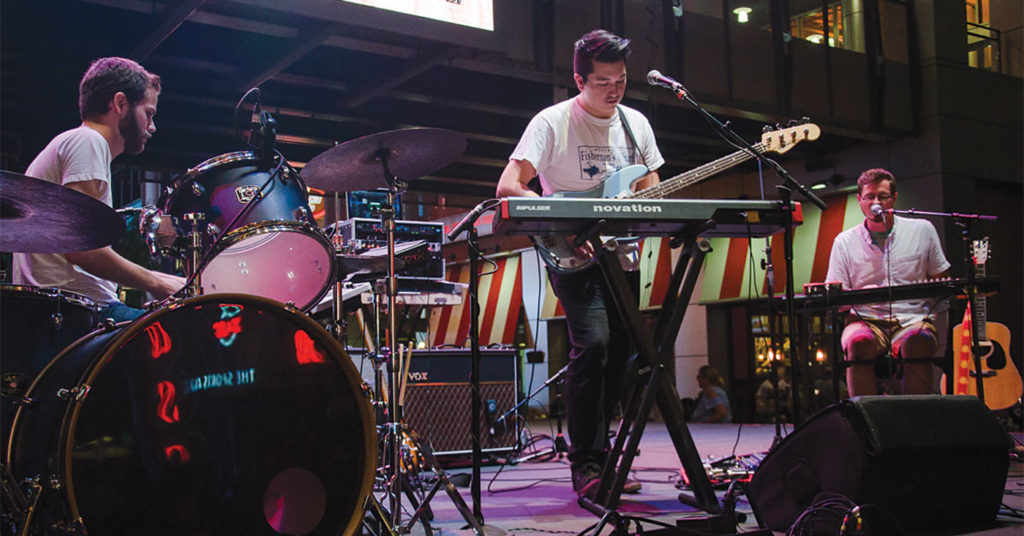 Kaleidico’s third record, Afro·brain, opens with an ominous sample of Jeffrey Dahmer ruminating on his crimes, distorted and mutated, for an unsettling effect.

“I was sitting and watching Jeffrey Dahmer on YouTube,” said Matt Moore, the sole songwriter and driving force behind the band. “They asked, ‘Why would you do it?’ And [he said] the only thing that he could do was to be in his own little world, but he took it too far. I do that with music. It was a strange parallel.”

Moore’s interest is predicated less on the horrors perpetuated by a madmen, and more on the isolation that inspired it. And that darkness remains present throughout the album. This isn’t a collection that dwells on ugliness, but that contemplates change — both personally and socially. That Moore employs so many questions in his lyricism, speaks to an uncertainty in character, either in himself, or, with any of the characters that appear throughout, channeling that the world is a complex place that seldom yields answers.

“I gravitate towards that, because the music isn’t objectively telling you how it is,” he said. “I really don’t know for sure. A lot of times, I’m on a topic where I’m ambivalent. There are a lot of questions where I’m not really on one side of it.”

At its heart, the concept is about the world inside your own mind, and the unique control you have in that space, which is reflected in the opening line: “My own little world where I can be.”

“You keep hearing this theme go through the album,” Moore said. “It’s what it sounds like. That’s what the album is about.”

Starting with 2013’s Free Falling Waltz, the band’s freshman release, Kaleidico has progressively phased out acoustic instrumentation in favor of electronics. The record Zoetic, in 2015, offered an electro-acoustic approach that touched less on the psychedelia of their earlier work, and more on the ephemeral pop qualities of a band like Radiohead. Their newest, Afro·brain, is almost entirely reliant on synthesis, although in a way that never feels stilted or inorganic.

Other than a collection of B-sides released at the beginning of 2016, Moore spent last year in his home studio, digging through samples, trying out drum sounds and playing with vocal manipulation — each a new character as they appear in Afro·brain, where each and every sound started at a microscopic level, and was built up from there.

“The beginning of the album is really tough, because you’re trying to find a sonic landscape that you may get stuck with for a while,” Moore said of the composing process. “That’s definitely how all three albums started. You kind of figure out equalizing and production techniques and ride them out to the end.”

Where once Kaleidico focused on comparatively straight-forward psychedelia, the music has mutated into something that pushes the boundaries of pop music, a bridge between the alien and familiar.

About the qualities unique to their most recent work, Moore added: “It’s just keyboard and samples. Pitch-shifting my voice. Being able to do all these things, it was almost like collaborating with someone. Now, you have a melody that has this dark sound, but then, on top of that, you don’t just have a voice that you’re bored with, which is yours, you’re able to shift it and have a different voice.”

He prefers to work alone when writing. Moore composes each track on his own, bringing in the rest of the band to translate his ideas live.

“Each record that I make seems to get a little more personal,” he said. “Each unit is me trying to find something perfect with it. I think I would be a horrible person to collaborate with.”

In so many ways, the story behind the album title summarizes Kaleidico, a reflection of the cultural ephemera that touches Moore’s mind. Named for an image of a gorgeous woman with an afro that haunted Moore, Afro·brain took on its own life as an idea removed from any central theme. Ultimately, it’s about creating mystery, which is emblematic of the band as a whole, and the album in particular.

“If someone told you that an album is called ‘I’m Coming Home,’ you might have some idea of it,” Moore said. “[Afro·brain] doesn’t say anything until you get into the music.” •

Kaleidico’s new record, Afro·brain, will be available through Bandcamp, Spotify and iTunes on Thursday Jan. 26.