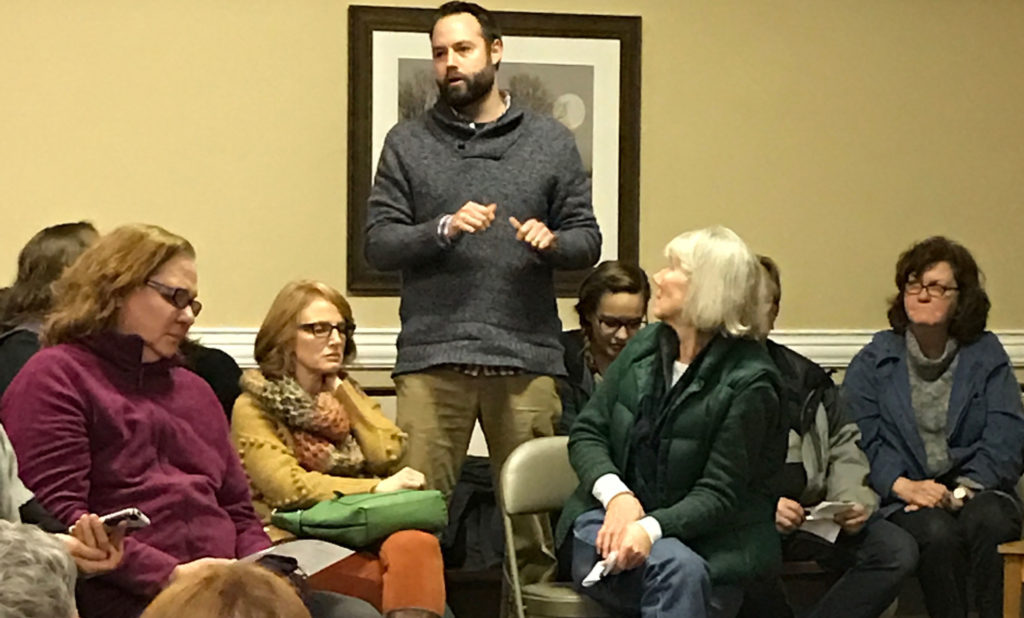 For a gathering in a church basement on a Tuesday night, the meeting bordered on raucous.

The public launch of Indivisible Kentucky was a chance to vent frustrations that had been accumulating since the presidential election. “There’s a lot we might disagree on, but the one thing we can agree on is stopping Donald Trump’s agenda,” said organizer Rev. Dawn Cooley to loud and sustained applause.

The nearly 200 people ranged among rows of tables and on the floor at Douglass Boulevard Christian Church also called out tips and strategies to Cooley and co-organizer Kim Hibbard throughout the two-hour meeting.

“Paul Ryan has already shut his phone lines down in D.C. – Mitch McConnell’s about to do the same,” said Hibbard.

“If you dial twice, you’re more likely to get through,” a woman in the audience suggested.

Indivisible Kentucky is a new advocacy group based on the Indivisible Guide, an online manual authored by a group of former Capitol Hill staffers that went viral after the election. Based on the Tea Party’s playbook of deploying a loud and coordinated group of constituents to sway Congress, it is aimed at teaching progressives how to do effective political organizing in the Trump era. The Indivisible Guide outlines “a resistance built on the values of inclusion, tolerance and fairness.”

What began as a shared document on Google Drive back in December has grown quickly into a national movement. There are now 3,000-plus local Indivisible groups around the country, according to Hibbard. “This is not an advocacy group, but a political-action group,” said Cooley.

Both in their mid-40s, Cooley and Hibbard met over coffee for the first time several weeks ago and ended up talking for three hours. Each was looking for a way to take action after the election. Cooley, a Unitarian Universalist minister, had imagined holding a 24-hour candlelight vigil outside U.S. Sen. Mitch McConnell’s house. Hibbard, a systems administrator by day, had not been involved in political activity before. “I just voted, and argued with people [during the Presidential campaign],” she said.

Each learned about the Indivisible movement in their own way, and made an initial connection. Hibbard had registered IndivisibleKY as a domain name and claimed @IndivisibleKY3 (for the third district) on Twitter. Cooley was gathering friends on Facebook. “She had the tech, and I had the people, so we said let’s get together,” Cooley explained.

They estimated their first gathering would draw “maybe 10 people.” But once word spread on social media, they realized would need a larger space. The meeting still ended up short of chairs.

Getting such a large turnout for Indivisible Kentucky was a reflection of the pent-up energy among those wanting to turn the tide against Trump. “I just felt so voiceless after the election,” said Rita Osborn, 66, describing herself as a retiree who was making politics her new job. “I wasn’t seeing a lot of hope from the Democratic Party. I wanted something grassroots.”

The meeting also attracted members of other activist organizations. “A lot of people have been mobilized because of their faith commitments,” said Doug Lowry, who is on the board of progressive Christian group Sowers of Justice Network. He enumerated protection of the poor, immigrants and refugees, and combating racism, as areas of special concern.

Rather than specific issues, however, the action items on Indivisible Kentucky’s agenda center on getting the attention of local members of Congress through phone calls, town halls, rallies and office visits. A group outing to McConnell’s Louisville office was planned for the very next day, for example, with the goal of asking for some face time with the senator. This would be followed by another activity, still to be determined, in coordination with an Indivisible national day of action on Feb. 24.

The other primary thrust of Indivisible activity is being seen and heard in the public conversation. There were separate sign-ups at the meeting for messaging, social media, news monitoring, blogging as well as communications work more broadly. “I would love to know that both McConnell and U.S. Sen. [Rand] Paul are actually listening to their constituents,” said Cooley. “We want to be unignorable.”