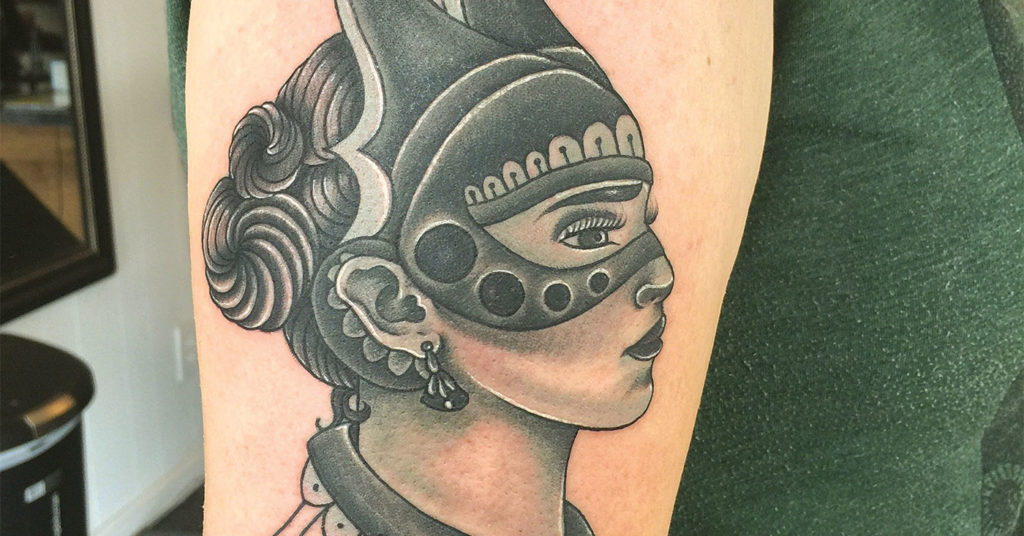 “I try to always be learning. You should always be looking out for the newest style,” she said. For instance, European tattoo artists have been working in Etching, Watercolor, Impressionist and Trash Polka styles for a while.

One of her favorite pieces is a Trash Polka full sleeve she did for her friend, Allie Bliss, at the Louisville Tattoo Convention. It’s a style out of the Netherlands and Sweden that uses mainly black and gray with pops of red. Bliss’ features red poppies, halftone patterns, geometric shapes and text. Twelve hours, no food and two bathroom breaks later, they both cried, happy to be finished, although the process seemed to go fast.

“I felt like I wasn’t even working,” Bananafish said. “We were just hanging out, and I got to do an awesome piece of artwork that I was just in love with. It feeds my soul.”

She was 6 the first time she saw a tattoo, on one of her mom’s biker friends. She remembered saying, “Somebody drew on you! Why isn’t it coming off?” She had to know, she said, “’cause I always got pissed when I would draw on myself and it would come off in the bathtub… When I found out you could do that and it would stay, I was like, ‘Why doesn’t everybody have this?’”

He was wrong. That moment motivated her. “It gave me that drive to be like, ‘I have to prove him wrong. I have to prove everyone wrong: my parents, my family, the school counselor.’”

Growing up she was influenced by alternative culture: Marilyn Manson, metal music and freaks. “I remember watching the ‘Jim Rose Circus’ for the first time, and the term freak being used, and being like, ‘Oh so that’s what I am. I’m a freak.’ And it wasn’t a bad thing. This was my niche, this was where I belonged.” This was totally different from her family’s Southern Baptist values. “[My grandma] thinks I deal out sin on a daily basis.”

While in college, Bananafish apprenticed under April Boss, owner of now-closed Jolly Rogers Tattoo Studio in Clarksville. The apprenticeship was the validation she needed. “It was like a marriage proposal. I just cried. I was so ecstatic.” Ten years later, Bananafish now has her own shop. Oh, and as for her name, she said, “It’s actually a double reference/homage. JD Salinger wrote a collection of short stories, one of which is ‘A Perfect Day for Bananafish’ and then, later, The Cure wrote a song called ‘Bananafishbones.’”

See more of her work on Instagram at BananafishTattooParlour.