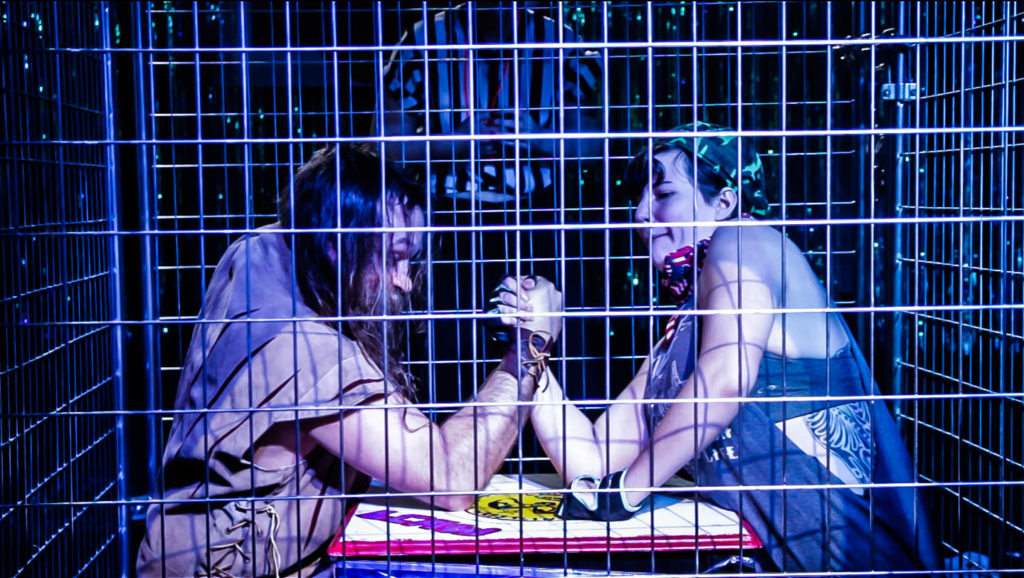 Starting as a performance by the Baby Horse Theater, a group founded by Becraft, for the Slant Culture Theater Festival, the LCAW quickly took on a life of its own. A collective lack of athletic prowess led to arm wrestling as a central theme.

“We wanted to present all the tropes of wrestling to a theater crowd,” Becraft said. “Since none of us had any experience in wrestling, we went with arm wrestling. We used intro music. It was absolutely a tribute to pro-wrestling, and a fun theatrical experiment.”

It was meant to be a one-time show. Energized by the crowd response, Becraft and company knew it would be a shame to turn back, and refocused their energy entirely on building the LCAW brand. Since 2015, the LCAW has worked to move outside of the relative comfort of the theater crowd.

“People weren’t going to be polite,” Becraft said. “They would hold up signs and yell. Doing it at a rock venue with a bar in it, it was a very different kind of crowd. We started writing more and more and scheduled our shows, and we developed a following. Our first show was 25 people, and now we’re pulling 100 people at our shows pretty regularly.”

Becraft and Miller write the series together, despite living in different cities. Miller, a resident of Chicago and an assistant director of The Second City troupe, and Becraft use whatever tools are necessary to put together a show, from messaging sessions, to phone tag and Google Docs.

“We get down to each show and write out a basic script outline for each show,” Becraft said. “And the rest is up to the competitors. We’ve been working with people who’ve been here since the beginning. It’s a lot of people without performance backgrounds. The basic storyline is us, but it’s very much a group collaborative effort as to what people see on stage.”

Becraft makes no bones about their theatrics, leaning into it in the name of a good time, although he’s confident in the quality of the production.

“There are legitimate competitions,” he said. “There is an organization out of Chicago named CLAW. It’s part of a chain of lady arm wrestlers. But they don’t have an ongoing storyline. Where we take it to another level is that we have an overall narrative that we’re telling. The matches, the finishes are all set out.”

He added, “We have a very diverse group. Our performers are all different sizes and we’re entirely inter-gender. All of us, in general, want to seem like we’re real tough. Some of us like to go to the gym. I do think we all have a commitment to putting on the best show that we can. The audience is always ready to suspend their disbelief. We have a skinny arm wrestler going up against something who is 250, but as long as we’re telling our story well, the audience is willing to go along with it. It’s worked well for us so far.”

You’ve got good guys and bad guys, shifting alliances, and colorful characters ranging from the near silent barbarian Grrunt, to the Juggalo Kween Kotton Kandy and her ally Big Floob, to the villainous Emperor Galactus. It’s all part of the bigger picture. They keep the door open on the rotating roster of villains, heels and good guys, enough that Donald Trump, who has a history in the WWE, and his cabinet are certainly welcome.

“It all depends if he’s willing to play ball,” Becraft noted. “I’m sure that he could very easily could be working on some shady behind-the-scenes deals. Gino Grigiot before he left said that he was a big Trump supporter. I don’t want to make any promises, but Donald Trump could be there. Who knows?”

“Fun is the bottom line,” he continued. “I want them to want to come to the next show. I think that’s the goal of any serial storytelling. If you have characters without a resolved storyline, they’ll want to come back.”

This weekend marks the end of season two of the LCAW’s ever-evolving story, with the Darkness on the Edge of Town invitational gauntlet. The tournament is single round elimination.The last arm wrestler standing walks away with the Air Horn, a special item that once blown allows them the chance to win one of the championship matches. You can catch the show this Saturday night at Kaiju.