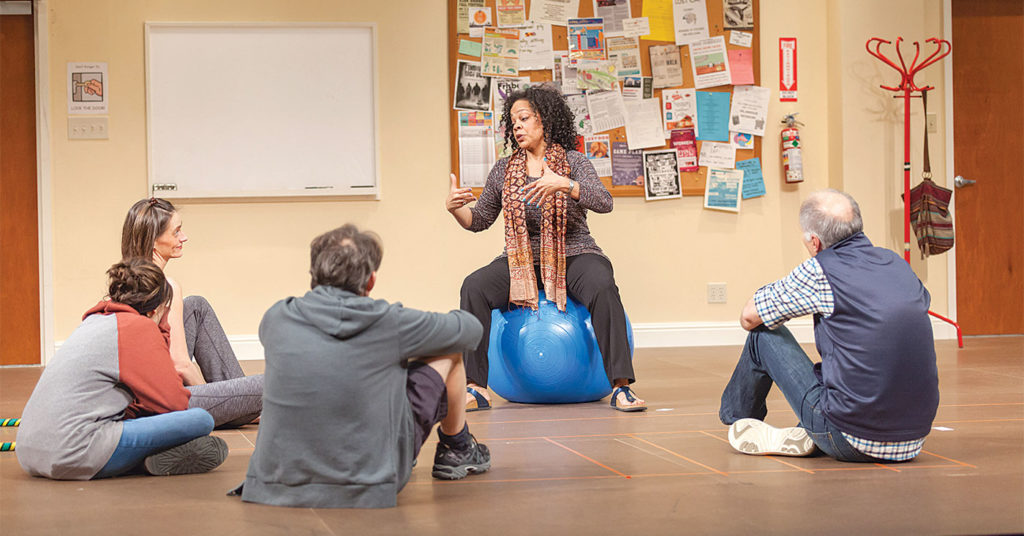 Actress Tonye Patano is probably most-widely known for her television and movie roles (especially her multi-season stint as Heylia Jackson in the Showtime series “Weeds”). But it’s theater that she loves, and theater where she has spent most of her career. And it’s theater that’s brought her to Louisville to play the central role in Actors Theatre of Louisville’s production of Annie Baker’s award-winning, and critically acclaimed, 2009 “Circle Mirror Transformation.”

“Theater is where I started, it’s where I live, it’s where I breathe,” said Patano (who previously appeared at ATL in the 2003 Humana Festival production of “Slide Glide the Slipper Slope,” by Kia Corthron). “It’s my core and my base. I think of myself — and all of us, actors, playwrights, directors — as storytellers. And I know it sounds odd, but for me storytelling is a bigger thing than the television market. I love regional theater because we tell stories where the people live.”

In “Circle Mirror Transformation,” the story Patano tells is theater about theater. In the role of Marty, she leads student actors (of varied ages and backgrounds) in a class designed to unleash their creative impulses through a sequence of “theater games.”

“On the surface it’s a simple play,” said Patano. “Barebones and quaint. But in its simplicity, it’s exactly the story of what’s happening to us right now. Life happens in the micro-moments, not just the macro-moments, and it’s those small moments that change us the most. As you watch this play, you start to realize how complex and delicate and nuanced it all is — and how revolution and revelation can come through simple exercises in life. The five people who come together this little community theater rehearsal room leave profoundly changed — not in mountain-moving ways, but as they literally play with one another, they start to see themselves reflected in each other, and its transformative. And I think the audience will have a similar experience as they see these people learning to live in the now.”

The exercises, said Patano, are as simple as walking a space while gradually and consciously opening yourself up to the things and people around you. But it’s no easy task to get out of your head, to stop second-guessing yourself and the people around you, and engage in a real way.

It’s a play filled with silent tensions and uncomfortable pauses, said Patano. Moments of awkwardness and sincerity that create a uniquely quiet kind of drama.

And, said Patano, playwright Baker and Director Meredith McDonough have done a brilliant job of telling what seems at first a very simple story. “In a way it’s like an impressionist painting,” she said. “If you stand close to it, it’s hard to understand. But as you step back, it becomes clear. There’s a point where you’re interacting with it, and then it changes.” •

The closing number in Wayward Actors Company’s “Unhindered and Ungendered — Once Upon a Spinning Wheel,” which opened last week at The Bard’s Town Theatre, is a full production number — but not one designed to send you out of the theater with a spring in your step.

Rather, it’s a wistful, heartfelt version of “Colors of the Wind” from the 1995 Disney movie “Pocahontas.”

This stanza, I think, captures the spirit of the production:

“You think the only people who are people

Are the people all who look and think like you

But if you walk the footsteps of a stranger

For some years, the Wayward folks have mounted thematic musical reviews under the “Unhindered and Ungendered” banner. Last year’s production, “A Killer Show,” featured some dazzling and witty songs from the violent side of musical theater. This year’s production, directed by Valerie Canon, is gentler and more idealistic. If you grew up with, or raised children to, the sounds of animated film musicals, you’ll find plenty of familiar songs here from movies like “Mulan,” “Sleeping Beauty,” “Hercules,” “Pinocchio,” “Aladdin” and more.

I don’t think I’ve seen a Disney animated film for decades, so I’d like to have seen an actual list of songs, with the movie source (as opposed to the jocular hints in each character’s bio-blurb). But the vocal performances (music director Doug Jones) were clear and compelling. So was the accompaniment from a small ensemble: Donnie Arbuckle, drums; Derek Carpenter, bass; Kevin Hines, guitar.

In fact, I came away thinking I’d like to hear more from some of these scores.

The conceit of this year’s production is that Flynn Rider (a character from “Tangled,” played here by James Thompson) is emceeing a night of music. The sequence of songs is determined by spinning a wheel — which results in a random sequence and selection of songs. It’s a unifying device for a play with no discernible plot (other than a couple of cute competitive huffs among the ingénue class).

And if the fun is always paramount, the message never disappears. It’s when you see all these oddball characters in one big splashy assembly that you realize each is beautiful in his or her own way. •

‘Unhindered and Ungendered — Once Upon a Spinning Wheel’
Through Jan. 29
The Bard’s Town
1801 Bardstown Road
the-bards-town.ticketleap.com/unhindered/
$18  |  Times vary