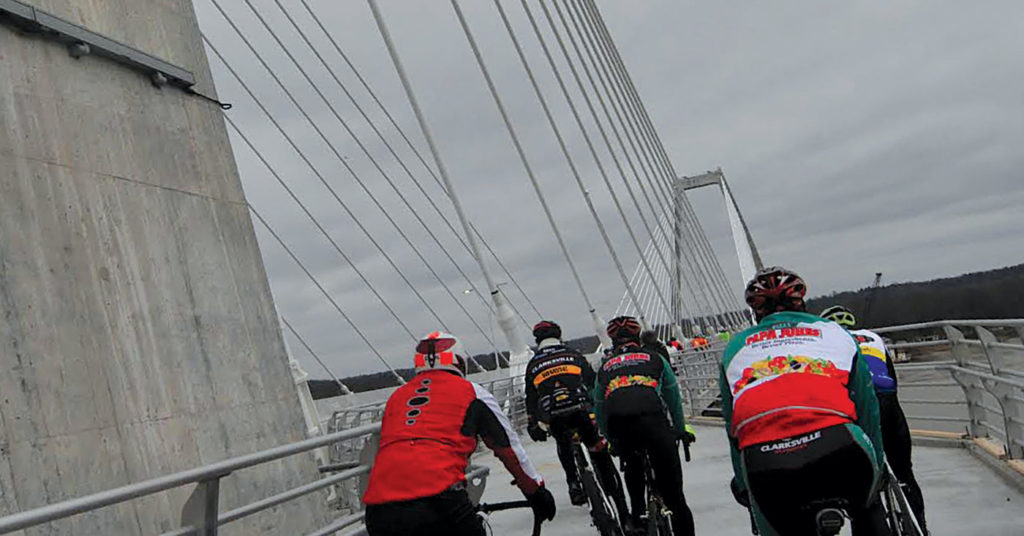 Cyclists at the opening of the Lewis and Clark Bridge on Dec. 18Photo by Tom Moran

Unless you’re spinning away in your pain cave, or you’ve been riding out of town for the holidays, then you may have heard about the opening of the brand-new Lewis and Clark Bridge on Dec. 18. This beautiful piece of multi-modal infrastructure is the most-inclusive, publicly-funded road project I’ve seen in our area. It is the first highway and bridge project to receive an Envision Platinum Award from the Institute for Sustainable Infrastructure. Among its sustainable construction practices is a wide, two-way bicycle and pedestrian path connecting Prospect to Utica, Indiana.

When I think about cycling to and from Kentucky and Indiana, I can’t help but remember all the other bridges we’ve crossed over the years. Adventurous, perilous, crowded, abandoned, remote and downright dangerous for the commuter and recreational cyclist alike. They are necessary. They are convenient. Some could be better. Some can go to hell. Some could just finally open someday.

Built in 1885, the K&I bridge was intended for all modes of traffic: foot, animal-powered wagon, street car and later, automobile. When I was a kid, my grandfather, a builder, drove his pickup truck to New Albany for supplies. We’d get halfway, and he’d say “Look down,” and there was the mighty Ohio River raging along beneath us, visible through the steel grate surface. The bridge is open only to trains, now. But on a dare, I climbed over the gate to ride across its west lane. It is in surprisingly good condition, and most cyclists who’ve crossed believe the most dangerous part is climbing over the gate with a bike. This bridge should be open to bicycles and pedestrians already, but the great-and-all-powerful railroad company Norfolk Southern has resisted every multi-city and multi-state effort to make it so. The last time I crossed it, shortly after 9/11, the railroad police took down my name and said I’d pay a $350 fine if I tried again, so riding across is not recommended.

Out of curiosity and desire for an epic training ride, I opened a paper map. No Google maps back then. Pointing my finger down river from Louisville to the next bridge I could cross on a road bike, I landed on the bridge connecting Mauckport, Indiana, with Brandenburg, Kentucky. I made a few phone calls and got a group of racers together for a 100-mile ride. We worked together over Floyds Knobs and through tranquil Elizabeth, Indiana, but the last 20 miles to the bridge were a relentless collection of momentum-sucking rollers. When we arrived at the bridge into Brandenburg, it was a quick and uneventful crossing back into Kentucky. The return trip, included a shortcut through the western entrance of Otter Creek to highways 1638 and 31W, and the 55-mph descent down the infamous Muldraugh Hill into West Point, back into the area of Jefferson Memorial Forest toward downtown Louisville. Clearly, the most interesting part about the bridge is the journey getting to it and back home, a 110-mile trip. Epic.

For what seemed like an eternity, this was the only bridge near Louisville that a cyclist could legally cross. Ask any retro-grouch about the days when solo cyclists risked their lives (some dying) crossing the bridge, also known as the Second Street Bridge, where there are four tight lanes of harrowing traffic, with motorists endangering everyone. I commuted over the bridge for a couple years, and some days it was so bad I’d just ride the sidewalk. When it opened in 1929, it was set up with only two lanes of traffic, which allowed more room. Recently, Louisville Metro marked it with sharrows (shared lane markings) and added signs that read: “share the road with cyclists.” Rarely crossed by groups and individuals, it is the bridge we use when the Big Four Bridge is closed or too crowded.

Built in 1885 as a railroad bridge, it was closed in 1968. For decades, it was called, the “Bridge That Goes Nowhere” and rock station WLRS 102 had its logo in lights on the middle span. In 2014, the Big Four reopened with the promise that bikes and pedestrians would travel safely across the river together and in harmony. Then, several months after the opening, reports of speeding cyclists harassing pedestrians lead the Waterfront Development Corporation to remove the bike lane markings from the center of the bridge to appease the bike haters who happen to walk. In their own words, they said bike-lane was removed to eliminate “entitlement.” On busy days, rows of walkers block the passage, mostly unintentionally. They are aloof and oblivious as I ring my bell and yell out, “On your left.” It’s our belief no cyclist should be going for a Strava segment (a cycling and running tracking application) on a crowded bridge, but no one can escape the fact that the project was sold to the community, government and public and private investors as a “bicycle and pedestrian bridge.” It’s a wonderful and civilized crossing, landing the Louisville cyclist into charming Jeffersonville, Indiana, and onto some of the best routes around.

The Lewis and Clark Bridge

This newest crossing takes cyclists from New Salem Road in Indiana at the former Charlestown ammunition plant, near sleepy Utica, along a pathway to the span at a narrow portion of the Ohio River. The bridge drops you down to River Road in Prospect. The choice for cyclists is: What time of day and week is best to ride out or back in safety? The opening of this bridge will attract additional groups of cyclists, more than we’ve seen before, and it will provoke controversy, once again, about bicycles on River Road. The few motorists who risk everyone’s life by the way they deal with traffic on this scenic byway will be forced to adjust. Most cyclists are aware River Road is bike-hater central, even as Prospect officials are working on a plan to make the area bike- and pedestrian-friendly in anticipation of the 100 mile Louisville Loop connecting it with Parklands and Waterfront Park.

As soon as the bridge opened, it created a 30-mile bridge-to-bridge loop for cyclists. The distant promise of the Louisville Loop and Prospect multi-use paths will add to a bike and pedestrian network to be coveted by any progressive city.

We are not only building bridges, we are biking bridges.