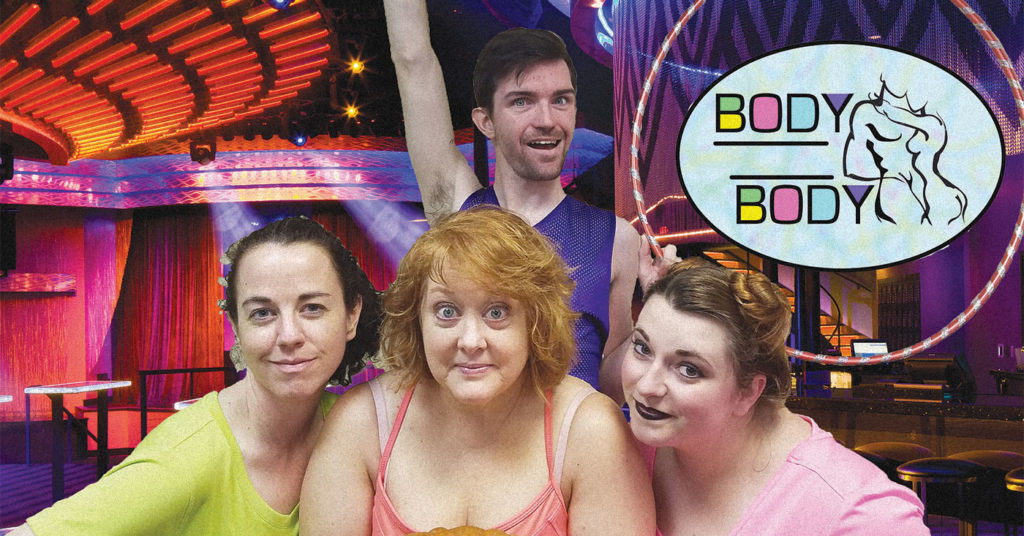 It’s rare that the mere act of walking into a theater is enough to lift my spirits. But last weekend at the Henry Clay Theatre, that’s exactly what happened. The play is Anthony Wilkinson’s “My Big Gay Italian Mid-Life Crisis,” which kicks off the second half of the season for Pandora Productions. The set design, by Eric Allgeier, is a gleaming, glittering, looming structure that transports you into the weird fantasy world of an Atlantic City hotel presentation space. You can tell that it’s all a thin veneer, of course — but it’s a sincere veneer, without a hint of the cynical, manipulative intent you encounter in, say, a real casino. This set greets you with a conspiratorial, inviting wink that lets you know right up front that you’re part of a grand joke.

And the set is just the first of many jokes in this fun, fast-paced production directed with fine comic touches by Jason Cooper who gets outstanding technical support from Lindsay Chamberlin (costumes), Ashley McKenzie (props), Laura Ellis (sound) and Jessie Alford (lighting).

This is the third play in Wilkinson’s “My Big Gay Italian…” cycle (the first two were “Wedding” and “Funeral”).

Anthony is a brooding sort, beset by money worries and recovering from an affair gone bad — but the manic antics of the others in his group make the folks from MTV’s “Jersey Shore” reality series look like normal civilians. Snooki and The Situation wouldn’t last five minutes in this company. And in case you’re wondering, their entire shtick revolves around an utterly guilt-free diet plan called “Body Body” that’s based on Italian cuisine and apparently involves no restrictions whatsoever. You want cannoli? No problem: eat as much Body Body Cannoli (or pasta, or whatever) as you like — and watch the pounds melt away. Heck, if Pandora had been selling Body Body products in the lobby, I’d have brought some home…

The big news for Body Body is that buttoned-down billionaire Nathaniel (Ken Robinson) is interested in acquiring the firm and taking it global. That might solve Anthony’s money woes, but it wouldn’t heal his romantic wounds.

Then, in a plot line that might have cropped up in an ancient Roman comedy (but for the fact that it involves an internet hookup site and some phony identities), a farcical romantic triangle emerges involving Anthony, Nathaniel and Anthony’s former lover, Andrew (Michael Lee Stein).

Just as things start to get wild on the personal front, Nathaniel also adds another complication: He’ll only buy Body Body if the firm broadens its culinary horizons.

This mandate occurs at the end of the first act, and, by the second act opening, our “Jersey Shore” denizens have complied — donning kimonos, Irish accents and more, in a roller-coaster ride of wild caricatures. All of the individual performances here are a blast to watch. Sharp’s divo-like preening gives us a quintessential comic pitchman. And the interplay between the three women in the cast — Calman, Webb and Crocker — revolves around a host of issues (not least Toniann’s goal of raising enough money to buy “new tits,”) that are way more entertaining (and better bet) than doubling down at the blackjack table.

The women who inhabit “Real Women Have Curves” (“Las mujeres verdaderas tienen curvas”) by Josefina López are as ambitious, irrepressible and witty as those in the Pandora comedy.

But the Teatro Tercera Llamada production that opened last week at the MeX Theater in The Kentucky Center draws us into a completely different world. Here, too, the set (designed by Haydee Canovas, who doubled as costume designer) takes us into a beautifully-articulated world: a Los Angeles garment factory in the ‘80s.

This is a formidable and fascinating group of women. The plant is owned by Estela (Penelope Quesada), a young entrepreneur whose fastidious standards and design expertise are strong enough that her clothing is on racks in some of America’s most prominent stores. Estela’s mother Carmen (Luz Estela Gonzalez Hoyos) is a blunt, critical worker with traditional values; her young sister Ana (Jay Maria Padilla) is a feisty, radical thinker with modern ideas and aspirations to attend college and escape the life that surrounds her. Their coworkers are Rosali (Xenia Miller) and Pancha (Sarah Baker).

The narrative is shaped by Ana’s journaling of her experiences, and the story is a provocative, inspiring look at a tangled thicket of threats and issues that include the looming fear of immigration officers, the casually cruel sexual manipulations of men, the powerful tensions between deep cultural traditions and modern opportunities and the ferocious economic exploitation of immigrant entrepreneurs.

As the title suggests, it is their shared anxiety around body image that brings these women together in solidarity. It happens in a fine celebration of their shared humanness — a moment that culminates in a bold idea that in its quiet way is more moving and inspiring than the most eloquent political manifesto. There are excellent performances here, and under the sure-handed direction of Jay Maria Padilla, this Spanish language production (with English language supertitles) offers an excellent introduction to one of the city’s most interesting theater companies. Highly recommended.

We have room to mention a only few highlights:

“#Matter,” by Idris Goodwin, directed by Lila Rachel Becker, drills down into the polarized discourse around #BlackLivesMatter. It was a fearless, masterful discussion — right up until the conclusion, a predictable sentimental twist that diminished all that had gone before.

“Home Invasion,” by Krista Knight, directed by Krissy Vanderwarker, is a witty little ghost story enlivened by a brilliant piece of costume design and marvelous performances.

And “Melto Man and Lady Mantis” by Eric Pfeffinger, directed by Luke Harlan, is a meeting between two bizarre super-hero types, one an accountant, the other with a tax problem. Both have origin stories featuring industrial accidents. Both have the physical features you’d expect from their names. And their encounter culminates in a bizarre battle royal. •