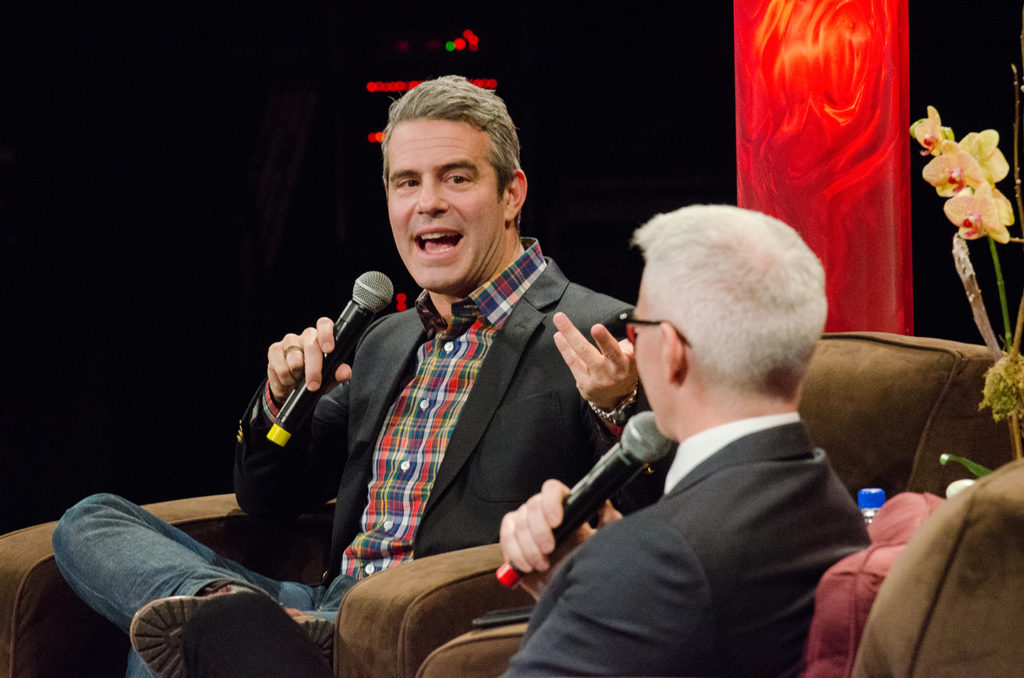 On March 11, two of the most prominent, influential and recognizable gay men in the world will be sharing tequila on the stage of The Louisville Palace. Andy Cohen and Anderson Cooper are bringing their two-man talk show, “AC2: An Intimate Evening With Anderson Cooper & Andy Cohen,” to Louisville, which will be, at least for Cohen, the first visit to Derby City.

“I’ve never been, but I’m so psyched to come,” Cohen says. Mostly known for his reign as the veritable king of Bravo, Cohen has been with the network for 13 years and served in a variety of capacities from producer of the juggernaut “Real Housewives” franchise to host of his own show, “Watch What Happens: Live.” Cohen is also the first-ever openly gay late-night talk show host, a feat he’s proud to have accomplished but one he didn’t exactly anticipate.

Growing up in St. Louis, Cohen was always ambitious but had no out gay men to look to as role models other than perhaps Massachusetts Representative Barney Frank. Nonetheless, Cohen knew he could be a trailblazer of some kind. “I always kind of found my own way, so it’s not like I didn’t think I could have a career in TV – I always dreamed big for myself,” he affirms. “When I was in the closet in St. Louis growing up, no, I certainly didn’t think I would be some publicly known out gay guy. But I certainly didn’t think that I wouldn’t succeed or anything like that.”

Now, as one of the most famous gay men in media, Cohen appreciates his position and what it says about mainstream consumers embracing LGBTQ figures. “It is an honor to be the only openly gay late-night talk show host, and I think that just the fact that I’m there every night, I’m doing my thing and it’s not a gay show but a show for everybody – I just happen to be gay – that’s my mentality about the show,” he says. “And I want people to turn it on and laugh. I didn’t have, growing up, a lot of gay role models on TV, so if there’s someone in the country who turns on the TV and sees me there and sees that I’m having a good time and that I’m being myself, I think there’s certainly power in that, and I’m happy to be that guy.”

Indeed, being an LGBTQ pioneer in media is a monumental achievement not only by Cohen himself but also by Bravo as a whole, as it has a history of putting gay characters in the spotlight without focusing primarily on their sexuality. “I think with ‘Project Runway’ and ‘Flipping Out’ and ‘The Rachel Zoe Project,’ we’ve had so many shows where we’ve shown gay people just being themselves – they’re not on TV because they’re gay; they’re on TV because they’re talented, and I think that goes a long way,” he maintains. “I think for another generation to see gay people on ‘Project Runway’ or ‘Top Chef’ – I think that’s big.”

But with that comes the other side – when those real people being highlighted illustrate the darker side of reality. For example, on multiple “Housewives” episodes, characters have made homophobic remarks, used gay slurs or promoted gay appropriation. Though there seems to be no consequence at first, Cohen almost always will address the comments during the reunion shows, which he astutely perceives as a form of activism. “I think anything you can lend to the conversation is a form of activism,” he emphasizes. “And I also think that just being there, being around and sticking up for yourself – people give me crap sometimes for not doing more if they feel like the housewives are saying something inappropriate. I’ll always bring it up at a reunion, but if they say it in the show – people should see what people are saying and let it live on its own. … But it’s important to me as a fan of the show, a fan of them and as a gay man to call them out when I feel like I need to.”

The conversations that make up AC2, however, are a bit less probing – or more so, depending on how you look at it. “On opening night, someone got up and asked us how big our dicks were,” Cohen relates of the tour’s first stop. “So that’s how it started.”

In general, the show is essentially the audience watching, and sometimes participating in, a cocktail hour between the two friends. “This is like the ultimate kiki with me and Anderson,” Cohen describes. “It’s like going out to a bar with us and hanging out basically. And we just tell stories. We give each other a lot of crap, and we’re great friends so we know what to ask each other that’s going to elicit a response from the other person and the audience. … The show’s about two hours, I’ve got a bottle of tequila with me on stage, we open it up for audience questions during the last 20 minutes or half hour. But it’s pretty spontaneous.”

It’s also an authentic showcase of friendship – two guys in the same industry who live very different lives that overlap perhaps more than some would expect. And it’s a chance for fans of either or both to see them at ease and being who they truly are in an informal setting. “He’s a loyal friend, he’s a confidante, he gives me career advice – we really support each other,” Cohen adds of Cooper. “He’s so loyal and really so much funnier than I think anyone realizes. He’s really funny, and seeing him in the show, it’s the best version of him that you’re ever going to see – he’s just great.”

Though the careers of the two men are seemingly quite different with Cooper reporting on breaking news on CNN and Cohen putting celebrities on the spot on Bravo, their show is evidence that the two are genuine friends. In fact, their differences in careers are perhaps part of what makes the show so engaging and entertaining for the audience. “Both of us, we’re always running around, and we’re always doing things that we think other people might have some level of interest in,” Cohen says. “And so we keep it fresh, but we have great stories and it’s a lot of fun.”

Tickets to “AC2: An Intimate Evening With Anderson Cooper & Andy Cohen” are still available and can be purchased online at livenation.com.