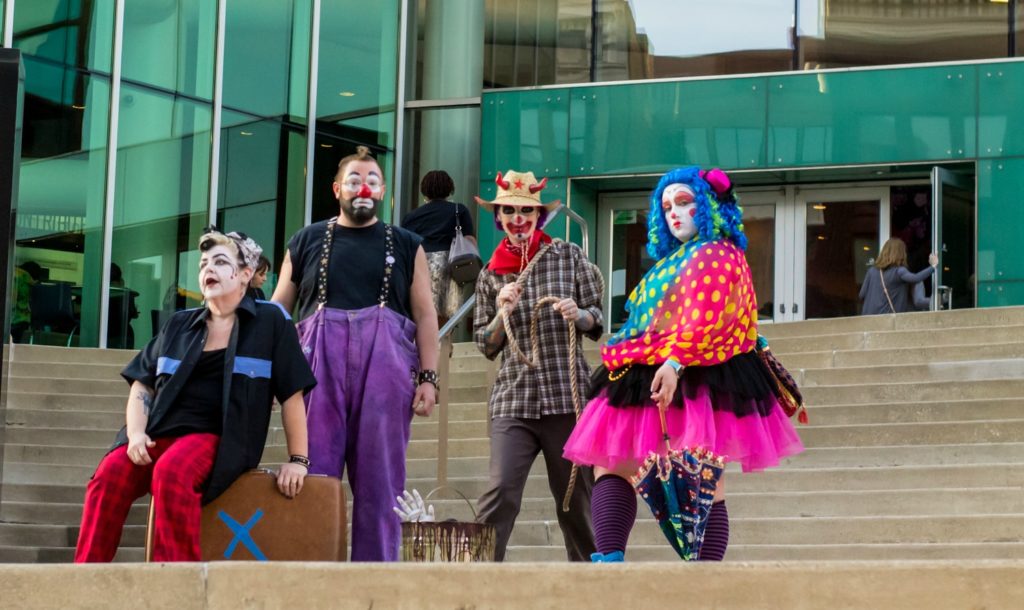 Suicide Squad’s GoreWhores
Purrswaytions (2235 S. Preston St.)
$5  |  11 p.m.
For your first weekend of the new year, head over to Purrswaytions (the self-described “one and only Lesbian bar in Louisville where everyone is welcome”), for a Suicide Squad-themed drag show. Acts include Felicia D Knight, Stevie Dicks, Mary Fagdalane and Auntie Christ.

Republic Bank First Friday Hop
Downtown
Free  |  5-11 p.m.
It’s the first Friday of the month, which means the Zero Bus will run for extended hours so everyone can explore over 40 boutiques, art galleries, shops, restaurants and entertainment hot spots on Main, Market and Fourth streets. Most of which will have specials, sales and/or live music to celebrate. To plan your route, check out the map here.

Kalashnikov Clowns
Bard’s Town Theatre
$10  |  8 p.m.
The Kalashnikov Clowns want to reinvigorate the art form of clowning in Louisville, with clowns that are funny, silly, emotional and even thought-provoking. And the troupe’s newest show, “Vodka-Rama,” is a “hysterical, theatrical love note to vodka.”

BrickUniverse: LEGO Fan Festival (Saturday – Sunday)
Kentucky Exposition Center
$15  |  10 a.m.-4 p.m.
BrickUniverse brings “the universe of bricks together under one roof for fans of all ages.” Get your nostalgia fix with the many LEGO exhibits, professional brick artists at work, and, if you’re really a blockhead, seminars on LEGO artistry. Toys, minifigures and bricks will be for sale, so you can go straight home and start building your own piece of LEGO art.

Music of David Bowie
Whitney Hall in Kentucky Center
$27  |  8 p.m.
It’s impossible to encapsulate the artistry of David Bowie in writing, but maybe it’s possible to do in musical form? Louisville Orchestra will do it’s best to pay tribute to Bowie’s wide-ranging musical career at this concert with Conductor Brent Havens, vocalist Tony Vincent and a full rock band.