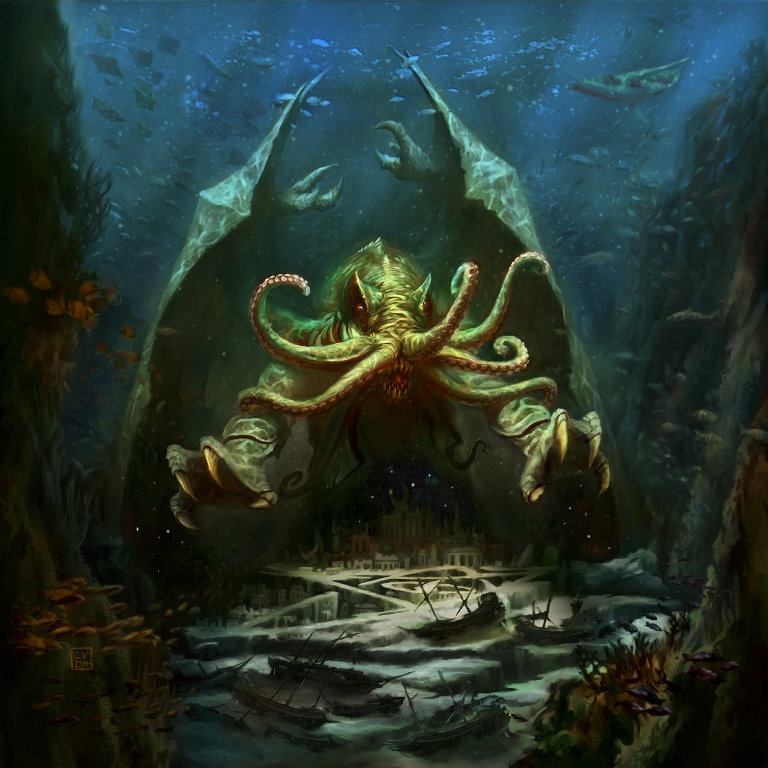 Art from the board game "Call of Cthulu."

Louisville Standing Rock Benefit (Jan. 13-15)
Kaiju, The Green Room, & Dreamland
$5  |  9 p.m.
To support the Standing Rock Sioux tribe, three venues and a number of local bands and performing artists are putting on three shows this weekend. Friday’s show at Kaiju includes Octo Claw’s Bizarre Bazaar, and music by Memory Gloss and Santana Jones; Saturday’s show at The Green Room (in Fresh Start Growers Supply) features acts by Wombo, Cher Von and Anwar Sadat; and Sunday’s show at Dreamland will include music from The Other Years, R. Kennan Lawler and Sapat. And all proceeds go to the Stand Rock and Oceti Sakowin legal defense fund.

Louisville Rock Lottery
Headliners
$12-$15  |  10 p.m.
Louisville’s very first Rock Lottery randomly assigns 25 local musicians to create five bands, which then will write three or four songs and perform them 12 hours later. It’s an exercise in scene building, genre stretching and creativity. And if you’ll notice the show doesn’t start till 10 p.m., which gives you plenty of time to see 1200 LIVE at the Kentucky Center at 8 p.m.! Check out his latest songs on LEO Presents’ first installment, and go to leoweekly.com every Friday this month an February for a new video featuring another band.

Slur Your Role XXIII – One Year Anniversary Edition
Kaiju
$3  |  3:45 p.m.
To celebrate a whole year of role-playing (and boozing), Nerd Louisville is hosting a night of role-playing games with a special One Year Anniversary Edition of Slur Your Role. Regulars will find the usual games (Call of Cthulhu, Star Trek Frontiers, Star Wars: Age of Rebellion, and a number of Dungeons & Dragons Multiverse games), your favorite dungeon masters, along with giveaways and surprises throughout the night.

‘The W. Kamau Bell Curve: Ending Racism in about an Hour’
Hanover College’s Collier Arena
$10  |  7 p.m.
Kamau Bell is one of those brilliant comedians who discusses such serious subjects as politics and racism, but he will have you laughing the whole time and possibly leave you with a few thoughts to chew on. So if you are looking to alleviate lingering post-election depression, join Bell for a “comedic exploration of the current state of America’s racism, combined with a little (unknown) history, a little Powerpoint, and a whole bunch of Kamau.”

Uncovered: The Consequences of Repealing the Affordable Care Act in Kentucky
Louisville Central Community Center
Free  |  2 p.m.
For everyone concerned about what repeal of the Affordable Care Act and Kentucky’s Medicaid expansion could mean for you and yours, join LEO founder and U.S. Rep.John Yarmuth for an important discussion. This Sunday afternoon, he hosts a public forum with elected officials, health advocates and Kentuckians facing the loss of their healthcare coverage.