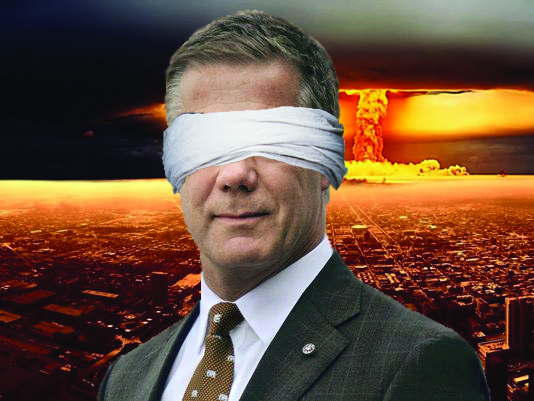 I hope Kent Oyler, CEO of Greater Louisville Inc., feels better after writing his op-ed for The Courier-Journal… but he will be the only one relieved by his empty rhetoric.

A blank, white page would have said more than the rhetorical exercise he used to clutter the page.

If the leader of Louisville’s chamber of commerce — the self-proclaimed voice of business — is going to speak out on the racial and economic divide in the city, he should have more to say than this. If not, he should just pass on commenting altogether.

Instead, his op-ed could have contained actual proposals, demonstrating actual progress, such as: “Here at GLI we have x number of members in The West End, and are doing y and z to boost that another xx this next year. We are working with our members to focus on programs to expand into The West End. We are looking to hold entrepreneurship fairs, for opportunities to invest in West End businesses.”

“So starting today let’s collectively decide to take the time to reach out, listen and learn. May we commit to that?”

OK, Kent. Where has GLI been for your entire tenure? How many days have you decided to take time to reach out, listen and learn?

“The first step is to get over the discomfort of addressing tough truths and entrenched stereotypes by listening and learning from each other.”

I don’t know what your discomfort is, Kent. Maybe standing for something, instead of wasting our time with meaningless, feel-good rhetoric.

“[T]aking the time to understand and appreciate each other.”

Are you serious Kent? What don’t you understand?

“Suspicion and stereotyping haven’t taken us anywhere positive in the past and won’t in the future.”

This is a pretty harsh self-condemnation, Kent. Why don’t you elaborate on your suspicions or stereotyping.

“We will never heal what separates us until we view ourselves as one community, both culturally and economically.”

Is that going to help heal that divide, Kent?

Ok Kent, let’s see it. Show us how you, and GLI, are going to view Louisville as one community. From what we can tell, your focus is on passing union-busting legislation and eliminating the prevailing wage for workers on government construction projects.

Oh, and a consumption tax (based on what you buy) that GLI advocates, is a regressive tax that will hit poorer families hardest.

Or how about you not support charter schools, which will only open another drain on already-stressed public school resources?

Finally, instead of courting Papa John Schnatter so he will speak about innovation at your annual meeting, how about you find any group that can help “innovate” a way to put an end to the food desert in The West End?

There are countless ways that you, Kent, and GLI, can make a tangible difference in healing the economic divide in our city. But your empty rhetoric is an embarrassment.