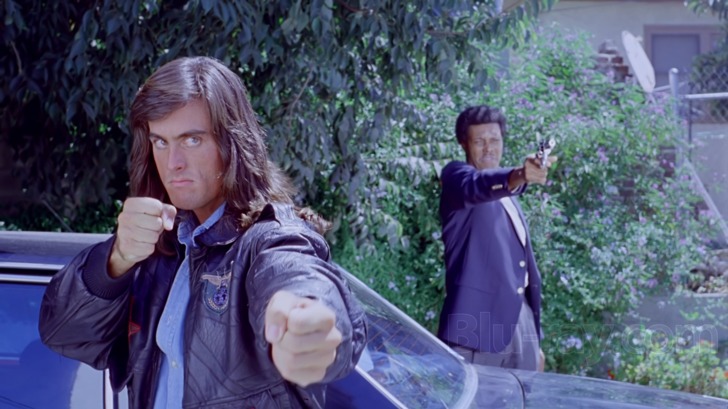 Still from the film "Samurai Cop."

Metal Monday
Highland Taproom
Free  |  10 p.m.
If your Monday motto is “Fuck Mondays,” then Metal Mondays are for you, my friend. This week’s show features acts by local black-metal band Deapscufa, and fellow black-metal band, Order of Leviathan, who are on “an infernal quest for total darkness through transcendent art.”

Sunny Saved Me Documentary Premiere
Louis’s “The Ton”
Free  |  7 p.m.
On a sweltering day in July 2009, the course of my life changed forever when a little, red pit bull fell from the sky, quite literally, and shattered everything I knew — in the best way possible. Sunny made waves when she was thrown from the Clark Memorial Bridge in front of hundreds of park-goers and diners, including myself, in a horrific act of animal cruelty. What’s had the most impact in our community is not her harrowing rescue, but the legacy she’s left through Saving Sunny Inc., our local animal-welfare and advocacy organization. Sydni McLain LaFollette, a WKU graduate, has created a short documentary highlighting Saving Sunny’s lifesaving work. I hope to see you there! —Kelsey Westbrook

The Mothra: Faith
Kaiju
Free  |  9 p.m.
You may have heard of “The Moth,” the national series of storytelling events. Now comes The Mothra, a legally-distinct night of original storytelling, and this time the topic is “Faith.” Whether you have faith in The Flying Spaghetti Monster, or faith that our republic can withstand the damage of an orange monster, you are invited to share your tale at Kaiju this Tuesday. The only rule is that it be entertaining.

Screening of “Samurai Cop”
Seidenfaden’s Cafe
Free  |  10 p.m.
Simply put, “The Room” ain’t got shit on “Samurai Cop.” This so-bad-it’s-good movie from the ’80s is the “weirdest, wackiest, most bizarre, hilarious and utterly baffling film scraped up from the bottom of hell’s bucket.” Think “Lethal Weapon,” but made by your drunk uncle with his karate friends from the mall. And on top of it all, it has Robert “The Anvil Chin” Z’Dar.

Wake and Shake
Block Party Handmade Boutique
Free  |  7:30-9 a.m.
Attention all dancing fiends, you no longer have to stay up late, or deal with annoying, inebriated people, to get your groove on. Introducing Block Party’s Wake and Shake morning dance party! “No dance experience is required, just a good attitude [and] goofy workout gear is encouraged.” Music will be provided by a DJ from ARTxFM.

Kaiju Yoga
Kaiju
Donations  |  5:30 p.m.
“Detox then Retox” with instructor Jessie Lee, who will guide you through a “vigorous and mindful flow,” while “dabbling in the mythology behind the postures, chakras, funky transitions and physical awareness.” All levels are welcome. Just bring a mat and a donation for the instructor.

Howell’s Hoot & Holler Karaoke
Zanzabar
Free  |  8 p.m.
Howell’s Hoot & Holler Karaoke is not your average karaoke session. Not only can you get on stage and sing your heart out, but you also get to enjoy random entertainment by Howell Dawdy, and free tacos from one of Louisville’s local taquerias. It’s a night best described on the Zanzabar website as “lame ass, insular, pseudo karaoke.”

Haymarket’s 5th Anniversary
Haymarket Whiskey Bar
Free  |  9 p.m.
It’s hard to believe, but it has been five years since “a weird, little coffee shop that didn’t open until 11 a.m. into one of the top whiskey bars in the nation!” And you can celebrate this achievement with live music by Squeeze-Bot, special anniversary pours and a midnight toast!

Louisville Standing Rock Benefit (Jan. 13-15)
Kaiju, The Green Room, & Dreamland
$5  |  9 p.m.
The Standing Rock Sioux tribe seems to have stopped the North Dakota Access Pipeline, but this struggle is far from over. Which is why three venues and a number of local bands will play all weekend to raise funds for the Stand Rock and Oceti Sakowin legal defense fund. Friday’s show at Kaiju includes acts by Octo Claw’s Bizarre Bazaar, Memory Gloss and Santana Jones; Saturday’s show at The Green Room (in Fresh Start Growers Supply) will feature acts by Wombo, Cher Von and Anwar Sadat; and Sunday’s show at Dreamland will have acts by The Other Years, R. Kennan Lawler and Sapat.