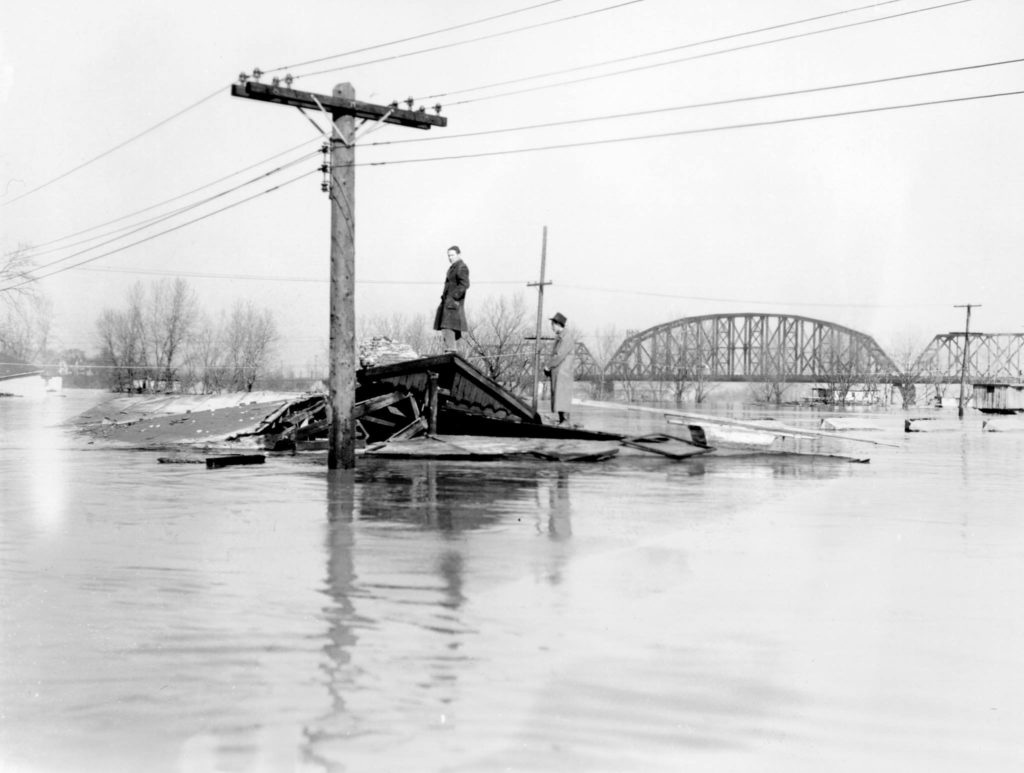 Photo of the Ohio River Flood of 1937 from the UofL Photographic Archive.

How High the Water Was — The Flood of ’37 exhibition reception
UofL Photographic Archive
Free  |  5-7 p.m.
Don’t miss this exhibition for the 80th anniversary of the Ohio River Flood of 1937, with photographs, documents, letters, journals and other ephemera pulled from the University of Louisville archives and collections. For those interested in a bit of local history, check out this gallery on the lower level of UofL’s Ekstrom Library.

Keep Louisville Live: Good People + Rarebit
Highlands Tap Room
Free  |  10 p.m.-1 a.m.
This Tuesday, trot on down to Highlands Tap Room for a night of live music with Good People, a band that likes to play “a mixture of blues and hard rock.” Also playing is Rarebit, whose genre is listed as “scud missile.” But maybe the Facebook event page describes these bands best with: “Did you like the 90s? I know I did and I’m pretty sure these dudes did too.”

Scientific Proofs
Mellow Mushroom (St. Matthews)
Free  |  6:30-8 p.m.
Scientific Proofs, a monthly “gathering for grownups who like to geek out on science,” is back. This month’s topic of discussion is “are you ready for the rise of the robots?” Gather your nerdy friends for a night of pizza and a general discussion (with an expert in the field) on “General Artificial Intelligence (i.e.: how many ways a technical breakthrough could lead to dangerous AI).”

The Vibe Open Mic with Amore’ King
Haymarket Whiskey Bar
$5  |  9 p.m.
The Vibe Open Mic is a chance for any and all spoken-word poets, vocalists, comedians and bands/instrumentalists to perform on stage. And this week’s host/featured artist is Louisville hip-hop artist Amore’ King.

PKEW PKEW PKEW, Fast Friends, State Year, For The Birds
Mag Bar
Free  |  8:30 p.m.-1 a.m.
Mag Bar is hosting a night of live music with local punk bands Fast Friends, State Year and For The Birds, with headliner PKEW PKEW PKEW, a Toronto-based band that “writes incredibly catchy punk anthems about the joys of drinking, life — not love, growing up and giving up … and skateboarding.”

Appalatin, The Dammit, Alex Wright, MIsty Mountain String Band, The Carmonas
The New Vintage
Free  |  7 p.m.
As you probably already know, The New Vintage is closing at the end of January. So take this opportunity to see one last show at the venue, with a lineup that includes a number of bluegrass/Americana style musicians.

This is My Body Art Event
BLōFISH Clothing Co.
Free  |  6:30-9 p.m.
BLōFISH, the first gender-neutral clothing store in Louisville, is hosting its first art show of 2017. “Derby City Consents: This is Our Body” uses photos to “reveal the face of over 20 different survivors of sexual assault,” which communicates the “struggle of living as a survivor, but also the amount of will power and strength it takes to overcome these terrorizing events.”