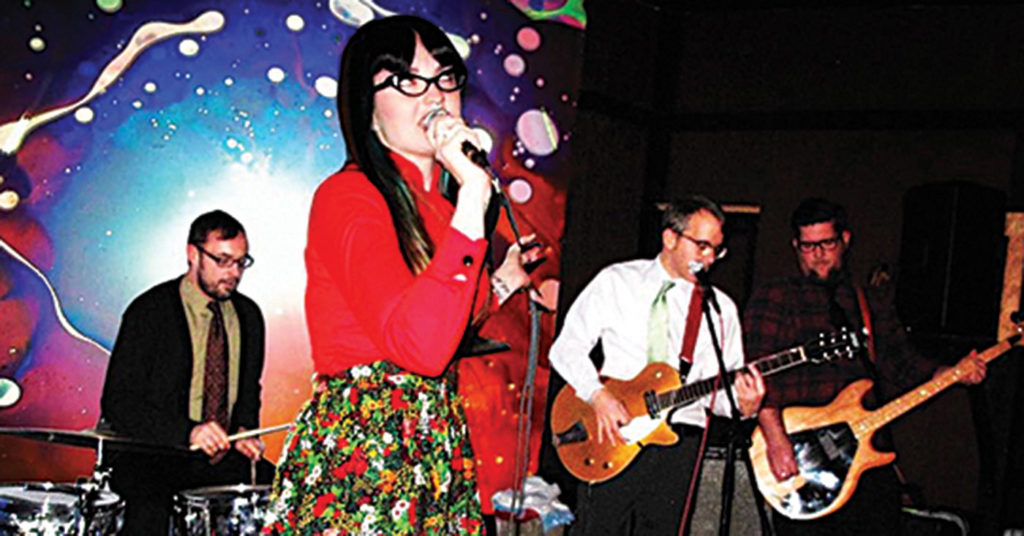 It’s somehow entirely accurate, and wholly inaccurate, that Yoko Molotov operates a solo project under the name Harpy. So named for a mythical monster, half woman and half bird of prey, the name has long since become associated with shrill and unpleasant people. Molotov is certainly a strange bird and one that flies her freak flag high, but she’s anything but unpleasant, showing a kindness in every interaction and a keen interest in following her muse. As Harpy, that journey has taken a variety of turns from horrifying noise collages to the reverb-soaked basement punk found on her newest collection, Wrong Songs, her 17th release under the name.

Molotov spins a lot of plates. As a visual artist, she has a style that blends pop art with manga, and it never flinches away from risqué topics or themes. That willingness to explore parts known extends into her musical career. As a member of Tycoon$ of Teen, Molotov plays it comparatively straight, lending her unique vocals to the equation. As Harpy, she lets the music take her wherever she needs to go.

“It is the audio component to my drawings and words,” Molotov said. “It comes from the same narrative spring that comes from all of my art, and normally it is done in a type of mental hermitage. It is raw and honest and gives me the opportunity to show anyone willing to look at what is inside me.”

In terms of her music, the split is largely a measure of her collaborators: Tycoon$ of Teen is a group effort, while Harpy is an outlet.

“Harpy is something I do on my own and fun is not always the objective,” she said. “I may have some kind of feeling or scene I want to convey and it is more conceptual. It is also lacking in pop sensibility.”

It’s safe to say that the music found on Wrong Songs, self-identified as experimental, is exactly that. For some artists, experimental is an almost-academic pursuit, but for Molotov it’s a way to dig into some deeper truth.

“I love the excitement and unknown that comes from experimenting,” Molotov said. “You could call this album a no-wave album, or you call it experimental, but really I just like being very free in what I do and not having any kind of restriction on my art regardless. The only expectation I have is to be brave and honest and genuine in the creation of the piece. I am often in another orbit when I do anything as Harpy.”

Molotov admitted that there is no central theme at play on Wrong Songs, although she did draw inspiration both from her collaborators on this record, her friends Scott Sharp and John Gravatte of the band RON, and in some strange corners of the world.

“I was thinking a lot of Japanese culture, namely from Ohahguro, the practice of painting one’s teeth black,” Molotov said. “Old world customs and weird things half remembered from childhood. I think, really, I was channeling a Japanese demon with black teeth and a siren’s voice. I called this Wrong Songs, because I knew it would be brutish and I knew it would be jagged and dissonant, and I knew a lot of people with a formal background would hear it wrong.”

The album is raw and unhinged, an expression of the inexpressible. Everything from the production to the lyrics and music are unglued, for an often chaotic vibe.

“I rarely sit and write Harpy lyrics. I write feverishly every day, and I just spew lyrics from that exercised mode of expression,” she explained. “I think there are many great ways of creating music and, for Harpy, I really enjoy an improvised method. I love the emotion, the unknown and the risk of total failure.”

Performances as Harpy manifest in some unconventional ways. Last year, Molotov played in a public dressing room, which ended with some interesting results.

“Whenever I do one of those performance art shows in public, I am always on edge,” Molotov said. “It is exciting, because I don’t know if people will love it, ignore it, or I will end up in jail. We did two of these shows, and I did them both with the amazing artist Cher Von. The first infamous dressing room show was shut down by security immediately, so we did it at Macy’s. They threw us out in two minutes and called the cops. Cher called them joyless.”

She continued, “I am a very nervous person and art, especially Harpy, has been a catharsis for me. It is interesting to put yourself in an uncomfortable position and have the stress and unknown to be a part of the finished piece. I will probably do another in the future. Maybe it will be in the LEO offices this time.”

Listen to Wrong Songs on Bandcamp (harpylouisville.bandcamp.com), where you can also purchase a digital download or a limited edition cassette.