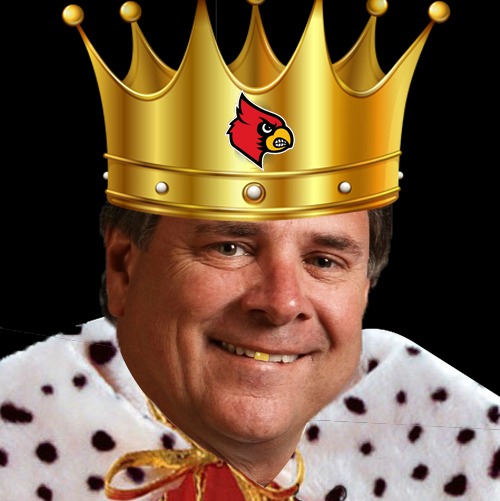 UofL Athletics Director Tom Jurich has threatened the city and, by extension, UofL fans, saying over the weekend that the Cardinals basketball team should leave the KFC Yum! Center and build its own arena on campus.

“If they don’t want us in there just tell us — we’ll leave,” Jurich said on the Saturday morning radio show, WLOU1350 “D&D Spill the Tea.”

The city? The fans who pay your salary and that of Coach Rick Pitino? You mean the fans who will foot the bill for — and support you during — an NCAA investigation into the basketball team’s sex scandal?

Jurich’s comments came in reaction to a proposed Metro Council ordinance that would essentially renegotiate the deal with UofL over how much the city and the university must pay for construction of the stadium.

His remarks, reported in The Courier-Journal, place him squarely in danger of landing on James Ramsey watch… someone whose tenure at UofL has been unquestionably successful but not without scandal and also fraught with arrogance and an inflated sense of invincibility.

Jurich’s threat was the first of two black eyes for UofL in less than a week. The university is on probation from its accreditation agency because of Gov. Matt Bevin’s meddling with the Board of Trustees.

His remarks are more evidence of how out out of control the university has become.

During the interview, talkshow host Denise Bentley, a former councilwoman, told Jurich it would be disastrous if UofL abandoned the Yum! Center. Jurich interrupted, saying, “Well, I think we should. I don’t think we’re wanted down there, so I think we should.”

The bottom line is that Jurich cannot be allowed to blackmail, or threaten, the city — or Cardinal fans. And that is exactly what he is doing. He is attempting to play the victim, while presenting misleading statements. It may just be an aggressive, bargaining strategy, but it’s disgraceful.

Certainly the city did not negotiate the best deal in the first place, but wanting to talk about changing the terms now that it appears the city is paying too much is the right thing to do.

Yet victim Jurich said: “And that’s the thing that really disappoints me so much is they’ve changed the whole conversation to blame it on the university, and I think that’s criminal.”

No, Tom. Nobody is blaming the university. In fact, kudos to you for squeezing such a sweetheart lease deal out of the city and arena authority. They are certainly to “blame” for the bad deal. But it’s no more “criminal” than you trying to blackmail the city going forward.

Jurich said the university would help with the arena’s debt, “but I don’t want to be the only one that helps.” Stop it Tom! You’re not the one helping. In fact, we’re all in this together. The CJ has reported that the council measure under consideration would commit the city to making the maximum annual debt payments of $10.8 million — if UofL and the state would contribute more through payments and tax-increment financing revenue.

But if you don’t want our help, then go ahead and be the dog that bites its best friend.

And is Jurich some sort of urban development expert? Here is what he said about the impact of the Yum! Center: “The city’s made a lot out of this deal, and look at what it has done to downtown,” Jurich said. “Where did this new Omni Hotel come from? You think they’d have come down there without the Yum! Center? I don’t think they would.”

The city, on the hook for the hundreds of millions of dollars, “has made a lot out of this deal”? No, Tom, the city is not a for-profit … like UofL athletics appears to be.

Jurich said maybe UofL could build its own arena where 22 silos once stood. Does he really believe UofL would abandon the center to build its own on campus? This is such a pathetic bluff — or Jurich is as delusional as was Ramsey. How long would it take for Jurich to seek public support from the city or Frankfort?

UofL’s Interim-President Neville Pinto needs to rein in his athletics director… publicly or privately. I recommend Jurich publicly apologize to the fans. A little humility can go a long way, while a lot of arrogance can, well… James Ramsey.