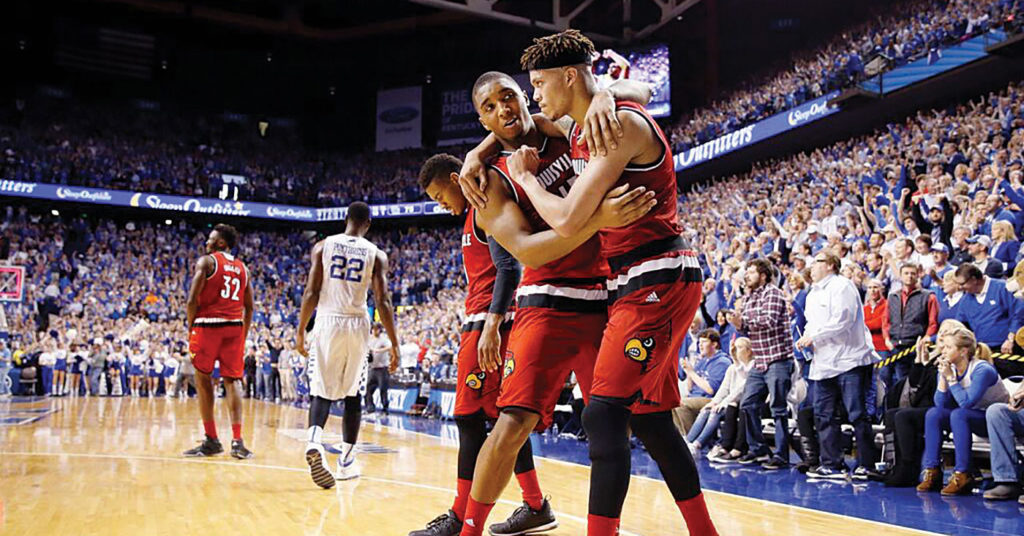 So, the real question: Does the University of Louisville have a chance?

Of course. But after losing nine of 10 games to the University of Kentucky since coach John Calipari arrived, it also feels like UofL’s never again going to win another battle of the Bluegrass.

These two teams aren’t equal, by any means, but keep this in mind: Of the nine matchups since Calipari got to UK, the average margin of victory has been only seven points, and only once has the margin been greater than eight (15 points on Dec. 31, 2010). This game is always close.

The very first meeting between coach Rick Pitino’s Cards and Calipari’s Cats six years ago has turned out to be remarkable foreshadowing of things to come for UofL in this rivalry. In that game, New Years Day 2010, with just under five minutes left in the first half, Louisville had managed just five points. Five! It took them nearly 10 minutes to make their first field goal! Nine games later, and the Cards have broken 70 only twice against UK: 2013, their National Championship team, and last year.

What does this mean for next week? Simple. Cards need to figure out how to score — which doesn’t reinvigorate my optimism given this year’s offensively-challenged team. While UK has scored 89 points or more in every game but one, and ranks fourth nationally in scoring —  averaging over 94 points per game — Louisville ranks 154th and just 75 points per game, which is probably due to their anemic shooting percentage, 43 percent, which ranks 241st nationally.

So why do I think UK wins only a slight majority of the coin flips, and not… 98 of them?

UK is still an unknown commodity.

We do know UK is immensely talented. They’ve got two standout freshman guards, each looking like the quintessential Calipari one-and-done, NBA-bound stars: De’Aaron Fox and Malik Monk. Add old-man sophomore Isaiah Briscoe to that backcourt, and you’ve got the team’s top-3 scorers combining to average 50 points per game.

It’s also easy to see the NBA in the future of the other, physically imposing 6-foot 10-inch freshman forward Edrice Adebayo, who is fourth-leading scorer at 12.4 points per game, and pulls in over eight rebounds per game.

These four comprise the majority of the vaunted Kentucky offense. But UK hasn’t faced a defense this season as good as Pitino’s.

Kentucky has faced adversity once this year… and they lost to the University of California, Los Angeles. That might be exactly what they needed to prepare for a championship run, but the UK team I saw against a very good UCLA team was a young team. They were mistake-prone, lost on defense and got pushed around inside for rebounds.

They looked like the cocky middle-school team that got more than it bargained for challenging the more-experienced, physically superior high-schoolers.

This will also be the first real road game for Kentucky, whose only games thus far have been at Rupp Arena, or neutral road sites. Quite the baptism-by-fire, even for the most-heralded freshman athletes. I expect these kids to come out with the swagger of a top-ranked team, but wonder how they will handle the spotlight.

While Louisville will undoubtedly go through a drought (probably multiple droughts) on offense, they will bring 40 minutes of intense, complex defense and challenge every rebound. That will be where UK can show they’re ready for the biggest stage.

Ultimately, UK is more talented. But we have seen UofL’s good, and it’s really good. It’s the type of good that could compete with anyone in the country.

The Cards need two things to win: find an offense and get back on defense!

Scoring this year has been a problem for UofL against lesser-opponents, so if UK can show any competency on defense, it will probably prove effective. And as good as UofL can be on defense, they seem to get lost in transition multiple times each game. Against UK, they are facing a team with an uncanny ability to capitalize on these opportunities.

Ultimately, I like to think about this game in future hindsight. After the game, what will we be saying?

If Kentucky won, it will be because they were too talented. They had too many weapons for Louisville to keep up.

If Louisville won, their defense and front-court size were too much for the young Cats. UK made too many mistakes down the stretch, and couldn’t find a way to stop Donovan Mitchell or VJ King, UofL’s star freshman. UofL was the first team to 70 points — maybe 60 — and they out-battled UK in a defensive slugfest.

Most important, UofL will win because UK won this year’s football game, which everyone in the Commonwealth knows is a bad omen for the basketball team. Since the football rivalry was renewed in 1994, there have been only four years in which one school has swept the season series.

Plus, no school has ever won five consecutive games in the modern rivalry. I’m going to regret mentioning that fact, because that is the classic commentator’s kiss of death.