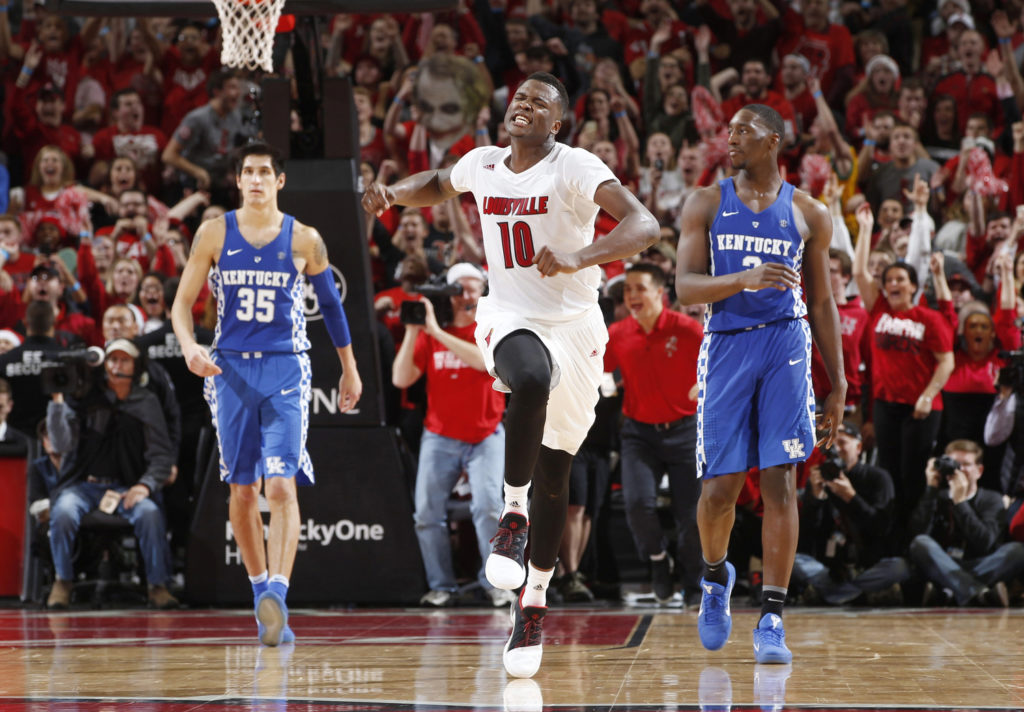 Standing in the freezing cold at 2:30 a.m. outside my condo building just two blocks from the KFC Yum! Center, as the screeching sirens approached, drowning out the booming fire alarms, it was difficult to be upset — because UofL is king of the Bluegrass.

It’s also hard to imagine that the false fire alarm wasn’t a prank by some UK fans heading away from the bars. Felt like college again… respect.

It was another classic game in a storied rivalry. On one hand, it was surprising: UK’s high-powered offense was held to only 70 points, 25 points lower than its season average coming into the UofL game. On the other, this game was totally predictable: UofL’s defense exposed Kentucky’s inexperience, and, when paired with UK’s defensive deficiencies, it turned out to be the perfect formula for the Cards.

But a funny thing happened upon rewatching the game — I had an entirely different takeaway after watching it on TV than I did seeing it live and in the moment … and UK fans should be very excited about this team come March.

In the moment, UofL was the better team. Its bench was deeper, its front court was noticeably bigger and, overall, it was a much better team. It was better on defense, rebounded more effectively, took better shots and had better chemistry … the Cardinals were better. And outside of UK’s incomprehensibly lightening-fast speed, which would have made even Muhammad Ali’s head spin, Kentucky seemed mostly average.

Freshman point guard De’Aaron Fox was clearly the best player on the floor, but nobody else seemed up to the moment. Even the mythological Malik Monk seemed pedestrian, and the strongest 19-year-old center/forward in the country, Bam Adebayo, seemed to disappear for long stretches of the game.

But then I watched the tape and realized it took a great performance for UofL to pull out a narrow win — not a perfect game, but a great game.

We always knew that this Cards team’s good is very good. But we also knew that it needed to find its offensive identity — someone or someones to step up and make this team their own and be the go-to guy in the clutch. They found that in Quentin Snider and Deng Adell, both of whom played the game of their lives. Particularly, Snider, who made the biggest play of the night, blowing past Adebayo for a layup with just over a minute and a half to left, pushing the lead to six.

Sophomore guard Donovan Mitchell praised Snider after the game, saying he was noticeably more-focused and more-motivated preparing for this game.

Well, if Pitino (or anyone) can get Snider to keep this level of focus in preparation for every game, he demonstrated he has the potential to be one of the better guards in college basketball — making Louisville a completely different team. Snider’s aggressive mindset on offense was apparent from the very first possession and led to his career high, 22 points.

This was the best game UofL has played this season. It wasn’t perfect — the Cardinals still turned the ball over 14 times and gave up at least 10 points on easy run-out baskets because they didn’t get back on defense — but they played a great game.

And they finally found some shooting range. While they matched their mediocre season average in field-goal percentage (43 percent), their 43 percent three-point shooting bested their season average of 33 percent. That makes a enormous difference, particularly in a close game, which this was for the entire game — UofL’s largest lead all night was seven points, while UK’s was just six, both in the first half.

UofL proved they are contenders — they have what it takes to make a run to the Final Four. But after rewatching the game on TV, I sure hope UofL doesn’t run into this UK team again in March.

Consider all of the things that went wrong for UK… and they still had a shot to tie at the end.

Monk only played 29 minutes because of first-half foul trouble, and he made only one of nine three-point attempts. Sure, he still got 16 points. But they only lost by three, and they needed him on the floor for 35 minutes or more, like Fox and Adebayo.

Plus, only four days prior to last night’s game, UK was in Las Vegas, battling it out to the last second against another top-10 opponent, North Carolina. They may be teenagers, but everyone gets tired physically… and emotionally.

It was also this UK team’s first true road game of the season. Usually the KFC Yum! Center becomes a split house during this game, but last night was a true home court advantage.

All of that adversity, and they still had a shot to tie at the end.

Kentucky is going to be great, and most of its problems will be remedied with time and experience.

Should the perverted basketball gods find humor in the tragic drama of another meeting in the tournament, it will be another great game, and we fans will have to suffer another 40 minutes of tension and torment. But at least we will know that — should it happen —it will be late in tournament, because both of these teams are contenders.

But if it doesn’t happen, that’s why this game was so important: UK may be great, but this is now Cards country.