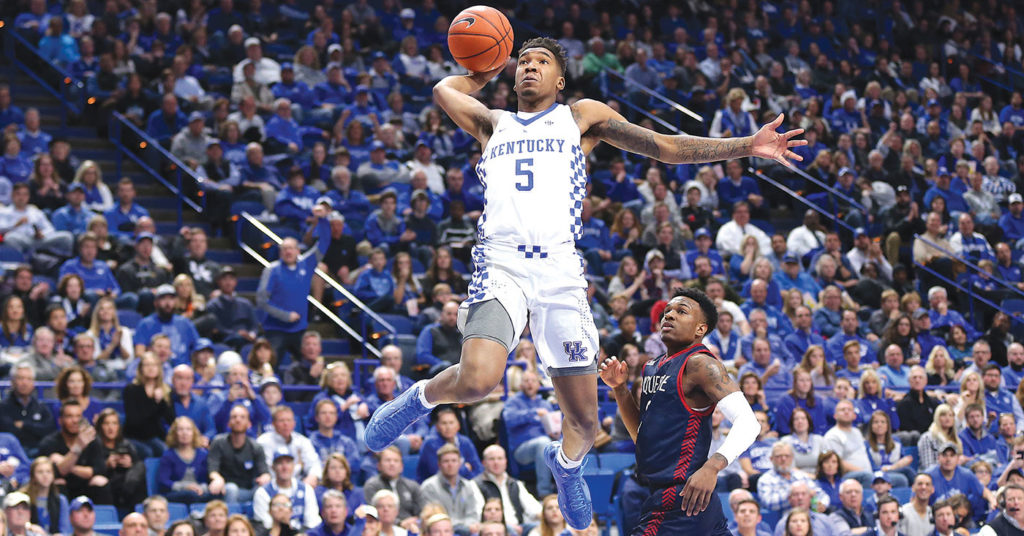 For a moment, and only a moment, the world made sense. Not just the basketball world — to a Kentuckian, the basketball world always makes sense, even if we have to rearrange the parameters of nature to fit our delusions. (I’ll die believing Tubby Smith had a bad fax machine, Eddie Sutton wasn’t paying players with bundles of cash, but, rather, stocking up for the hotel minibar and Rex Chapman just had to quickly borrow a cellphone to remind Ritchie Farmer to record something on his VCR). No, for a moment, the entire world, made sense. 2016 featured a feces-parade of an election that turned Americans bitter and divided, but it was ending. It would be a hazy memory soon, and America could recover. It all felt logical. And then Ted Nugent grabbed his penis at a Donald Trump rally.

“I got your blue state right here, baby,” Nugent said, grasping his penis. The only honest reaction to that is confusion. Why is it blue? Did he stick his penis in a box of Boo Berry cereal? Was he fellated by Papa Smurf? Was that his way of calling Florida for Hillary? I don’t know, but since then, the country has turned upside down. A billionaire who inherited his daddy’s money is the avatar for populism. A CEO who wouldn’t pay his workers is the symbol of labor rights. A teetotaler so thin-skinned that he can’t hear a joke about himself without going on a 2 a.m. twitter binge that would embarrass most un-medicated 13-year-old bullies becomes the guy that America wants to have a beer with.

This year, we don’t love basketball — we need basketball. Basketball isn’t an escape, or a point of cultural pride, but a lifeline for us to return to sanity. In a sane world, we should watch Malik Monk’s leaping ability, unable to comprehend how he defies basic science, instead of watching Donald Trump’s climate change policy, unable to comprehend how he defies basic science. This year the Commonwealth needs to put its faith in our teams and the coaches who lead them. Sure, maybe one of those coaches tried to lure high-schoolers to play for him through… less-than-noble means. And it’s not important whether a coach had sex in an Italian restaurant with someone who is not his wife. But that’s fine. Morals are imaginary, arbitrary and somehow dominate our entire lives. If you want to know what Kentuckians value, don’t look to how we vote — instead, consider the basketball team.

Kentucky fans value excess. Having five McDonald’s All Americans on the court is a good start, but we’d prefer to have a handful on the bench, as well. Because we value excess, winning the games isn’t enough — we care about the way we win the games. Any team can string together a seismic winning streak, but that’s not enough. We want to see triple-doubles and players diving on the floor. Why settle for the easy layup when the tomahawk windmill dunk feels more celebratory? In this way, fans are like the world’s most punchable parents, encouraging their kids to stand on the table in the middle of the restaurant and sing a Christmas carol — because we love the kids, we expect you to love them as well. But it goes hand in hand with the other Kentucky basketball value: dominance.

This year’s team may be the element we need to remind us of the proper order of the world.

De’Aaron Fox has the greatest speed off the dribble and court vision that Kentucky’s seen since John Wall. The shooting guard, Malik Monk regards the laws of gravity as a polite suggestion. Last year, there was so much focus on what Isaiah Briscoe couldn’t do (shoot threes, shoot free-throws, shoot anything from farther out than a layup) that we overlooked his very real contributions (he can guard all five positions, and he carves up a zone to find the hoop the way electricity finds the ground). In the offseason, he clearly checked himself into basketball boot-camp and his jump-shot now flirts with competence, and he has become a threat for the Wildcats. Briscoe is Kentucky’s spork, an endlessly useful tool that makes the meal possible (many concerned loved ones tell me I overrate sporks).

Patrolling the inside is Edrice “Bam” Adebayo, a 19-year-old with a body like the one Trump imagines he sees when he looks in the mirror. UK fans have already tired of announcers telling us that he got his nickname “Bam” as a 1-year-old, when, watching “The Flinstones,” he flipped over a table. But it is worth remembering that he flipped over a damn table at 1.

Can they be beaten? Oh God yes. UCLA came into Lexington, playing Kentucky’s favored, fevered pace, and outran the Wildcats. Moreover, Kentucky has assembled this talent glut in the same year as so many blue-blood programs (Duke, North Carolina, Kansas, Indiana) have a loaded roster.

But isn’t it better this way? This year, the Kentucky Wildcats will definitely be challenged and likely be beaten by a passel of teams. But this year, unlike last year, they are dominant. They have the talent, the skill and the drive to cut the nets, but, unlike scripted stories, nothing is guaranteed. The thrill of unraveling that mystery, of discovering the truths together, is why we seek out stories in the first place. This is, ultimately, the way basketball is supposed to be. But, dear God, if Ted Nugent grabs his penis and says “I got your Big Blue Nation right here,” then evacuate the building because something horrible is about to happen.