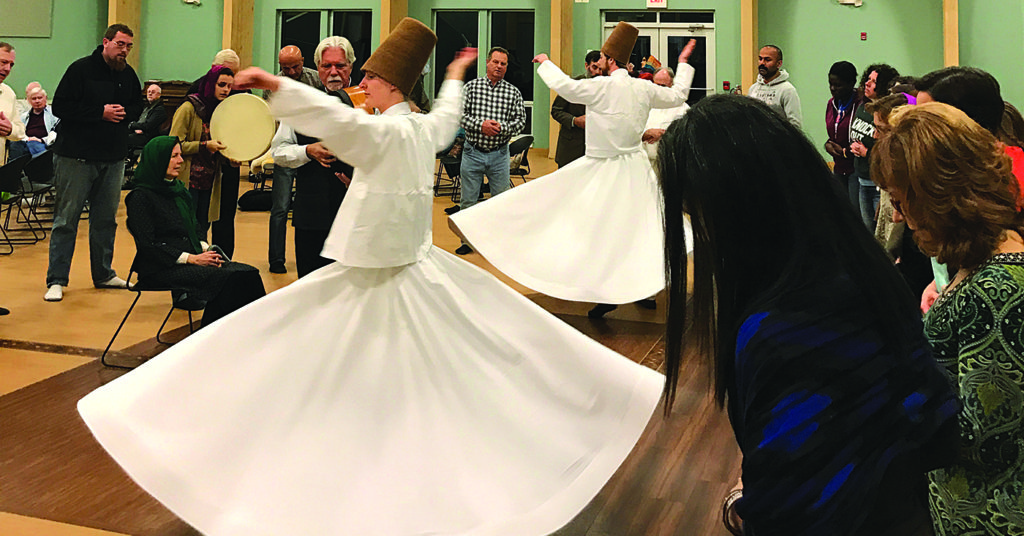 At a signal from the sheikh, two figures in tall brown hats and flowing white robes began to whirl, their skirts unfurling as they spun. Turning around them was a circle of about 50 people, holding hands and repeating the core tenet of Islamic belief: La illaha il Allah, there is no god but God.

Most of them were not Muslims. They were Christians, Buddhists, agnostics and even atheists. Teenagers and their parents, senior citizens, immigrants and native-born Louisvillians. They had gathered on an otherwise ordinary Tuesday evening in the Saints’ Hall of St. Matthew’s Episcopal Church on Hubbard’s Lane to learn about Sufism, the mystical branch of Islam.

“Sufism is not about religious doctrine and belief; it’s about developing our humanness,” Kabir Helminski, a local sheikh of the Mevlevi Sufi order, told the audience. “How will we deal with our egos — how will they be transformed? It requires a shift in consciousness, developing contemplative awareness.”

In order to tame the ego, the traditional teachings of Sufism advise seekers to eschew public attention to the point of becoming almost invisible. But these are times, especially for Muslims, that seem to call for a new kind of spiritual activism.

“Right now this country is so divided into otherness,” said Dr. Riffat Hassan, one of the main organizers of the event through the Salaam Network, an interfaith group created earlier this year to combat Islamophobia in Louisville. “The Sufi tradition is important because it goes beyond otherness to the unity. Salaam stands for wholeness. It’s not about defending Islam, but creating a climate of unity beyond diversity.”

One such unifying figure is Rumi. Although he lived more than 700 years ago in what is now Turkey, and was a scholar of Islamic law by vocation, Rumi has become a best-selling poet in America. One of the foremost figures in Islamic mysticism, he founded the Mevlevi Sufi order. The Mevlevis are known for their tradition of whirling, which is a form of meditation in motion. Another of their practices is zhikr, repeating words or phrases that are reminders of the Divine, such as La illaha illallah. Both the whirling and zhikr were primary components to the presentation at the church, aimed at providing an actual experience of Sufism, rather than just an intellectual or even poetic understanding of it.

“I thought it would be more oriented toward Islam and the Muslim understanding of God,” said Father Sebastian MacDonald, 86, a member of the Passionist order affiliated with St. Agnes Catholic Community on Newburg Road. “But I found the message to be that God is accessible to all of us.”

Because of that inclusiveness, and practices that involve music and movement, Sufism has a complicated relationship with mainstream Islam. Some conservative Muslims reject and persecute Sufis, or claim they are not Muslims at all. Kabir Helminski addressed this issue in his opening remarks. “Sufism is of the same spiritual DNA as Islam. It is not other than Islam, but it is Islam understood at a high level of consciousness through an awakened heart. Religions often focus on reward and punishment, but Sufism is explicitly about the transformation of the self through divine love.”

He said that process requires a high degree of sincerity and commitment. Not everyone is suited to the Sufi path. The community that has formed around Helminski and his wife Camille, who is an author and teacher of Sufism in her own right, only numbers about two dozen people in Louisville. But as co-directors of the Threshold Society, which is affiliated to the International Mevlevi Order, they oversee several larger chapters in other parts of North America and around the world. The group’s email list goes out monthly to about 2,000 people, according to Helminski, and its website, sufism.org, gets over 80,000 unique hits a month.

That online presence, and the Helminskis’ numerous books on Sufism, Rumi and other Sufi mystics, comprise the community’s public face. For spiritual training — including the whirling ceremony — members gather at a space dedicated to Sufi practice, though some members also participate in worship at local mosques.

Kabir and Camille Helminski have given several presentations on Sufism in Louisville over the last year, including at the 2016 Festival of Faiths. For her part, Dr. Hassan said she hopes they will be able to give another talk in the spring for Salaam Network’s next round of outreach efforts: “Presenting Islam correctly at this time is extremely critical.”