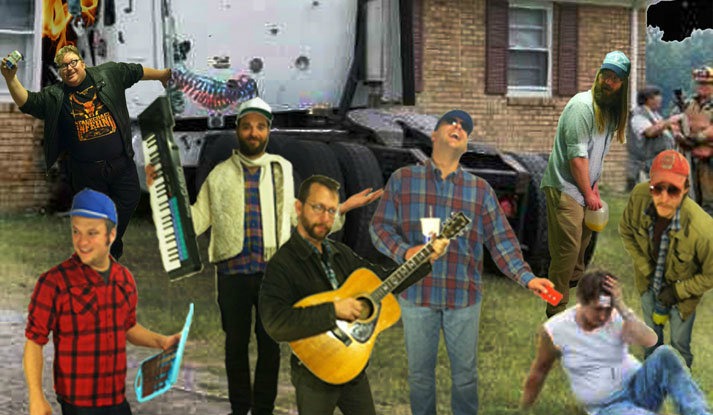 The Louisville folk group, The Annual Christmas Album Band, has released Christmas-themed albums on Dec. 25 every year since 2007. This year they will release their tenth-annual Christmas album. To mark the occasion, they will play their first live show on Dec. 20 at the Nachbar. This year’s album will be a best-of collection of songs from the last decade, which will be recorded live at the Nachbar show, immediately dubbed to cassette on the spot with a multi-duplicator and given to the audience. We recently spoke to Jordan Humbert, founder of The Annual Christmas Album Band, as well as band member and multi-instrumentalist Russel Willoughby about the band and the forthcoming tenth release.

LEO: When did you start the Annual Christmas Album Band?

Jordan: In 2007, I moved into my own place and started having some weekly bluegrass/folk type jams in the kitchen. The main players at the time were probably Jonathan Kempf on mandolin, Kyle Powell on Banjo and myself on guitar. At some point we decided to record some Christmas songs. That first record, Keep Them Yule Logs a Rollin’, was pretty standard. I don’t know who decided, but we called it The Annual Christmas Album Band, went around and put it in friend’s mailboxes, and that’s been the tradition for the last 10 years.

What made you decide to do this project?

Jordan: Honestly, at first, I suppose it was just a fun idea, and it was nice surprising people with a copy in their mailbox, but it’s certainly more than that now. I know that come December every year, whatever projects, music or otherwise, I have going on get put on hold, and it’s Christmas Band time. My house kind of becomes a mess and a revolving door of friends who want to lend their talent — or lack there of — to the recording. So, it’s almost as much that, than the end result, at this point.

How do you choose what themes to cover each year?

Russel: We generally meet up right after Thanksgiving, toss around some ideas, and then Jordan picks one, and we do it.

Jordan: Last year, we were sitting at Tim Tam Tavern, just spitballing some ideas. Joel Deckard, whose been involved every year, I think, suggested we write songs about squirrels. For some reason, we all thought it was dumb enough to work, so that’s how Squirrel Soup became a thing. I know, in 2012, I was sitting at the kitchen table taking with another band member, Chris Robles, and suggested we could literally make a record about anything, pointed at a coffee mug, and said we could sing about coffee mugs. So that year we recorded Coffee Christmas. I guess at some point, you just pick something and run with it. Why we keep singing about Sea-Doos and boneless wings, I’m not sure, but there’s a lot of Sea-Doo references on these records.

It does seem like Sea-Doos pop up a lot.

Russel: Yep. Eventually, the albums will just be 100 percent references to the previous albums. Every time I see a Sea-Doo, be it on a game show, or in real life, I think of the Annual Christmas Album Band. Also whenever I see squirrels — which is real often around here — I think of Squirrel Soup.

What are your favorite non-Annual Christmas Album Band holiday songs?

Jordan: Oh boy, I don’t know. My mom likes to bake apple pie and listen to Light of The Stable by Emmylou Harris every Christmas. I suppose that record holds a special place for me. But let’s be honest, Christmas music kind of sucks. I’m not suggesting we are helping the cause in any way.

Russel: Other holiday songs I like include Paul McCartney’s “Wonderful Christmastime,” even though it’s been diluted by being overplayed in stores and stuff. Elvis’s “Santa Claus is Back in Town” is good. When he sings “Santa Claus is comin’ down your chimney tonight” It sounds real dirty. Anyway, “Another Lonely Christmas” is one of the saddest Christmas songs if you listen to the words, but the music is uplifting. Great song. And it’s fun to imagine Prince, alone on Christmas, drinking banana daiquiris till he’s blind.

What are the plans for the tenth Annual Christmas Album Band release?

Jordan: I knew I wanted to play a show since it was our tenth year.  I’ve been thinking that for the last few years, really. I didn’t know what to do about recording another album since I knew we’d have to rehearse the hits to play at a show, and doing both seemed like a lot to take on. So, I had the great idea — or possibly bone-headed, we shall see — to record the show live and then put that out as this year’s release. So, basically, we are currently working on the artwork and rehearsing the ‘greatest hits,’ and they will be recorded live at The Nachbar, Dec. 20.  As soon as the set is over, we will immediately start duplicating cassettes and distribute them. It’s like Jack White’s fastest record but way less, well, way less of everything.

Russel: We’ll play a selection of songs from some of the albums, tape the show and dub some tapes on the spot for those who want one.

That’s amazing. Well, if it’s the tenth annual, might as well pull out all the stops!

Russel: Thanks, it’s so crazy it just might work!

What do you see for the future of Christmas Album Band?

Jordan: I suppose we just go back to our regularly scheduled program — record weird records and give them to friends. I don’t really foresee playing more shows anytime soon. Maybe year 20 we will play at Santa’s Pub in Nashville. That’s probably the best venue for a seasonal novelty Christmas band.

Jordan: Russel has been very much involved with the band the last few years and this tune he wrote for Squirrel Soup is my favorite on the record.  I’m pretty sure he plays all the instruments on this one — so it’s all Russel. It’s a song about squirrels in your attic getting jacked on nuts, so what’s not to love.

Russel: It’s weird that we got that kind of feel with that song using a drum machine, but we did.

Jordan: It’s a Christmas Rodeo has probably been the crowd favorite over the years. It’s the second release, but I don’t think we’ve been able to top it yet. “Two Step Round the Christmas Tree” is probably one of my favorites and the guitar work from Bob Dixon far exceeds Christmas Band quality.

Russel: “It’s Good to Be a Squirrel” has a warm, folksy vibe that just works for me. It’s also a good mission statement, for the record.

Russel: We called a bunch of people we knew on the phone, asked them to sing “Feliz Navidad”, and mixed the results into the recording. It really feels like a holiday party with friends and family, and it reminds me how fun it is to call people at random and get weird on them.