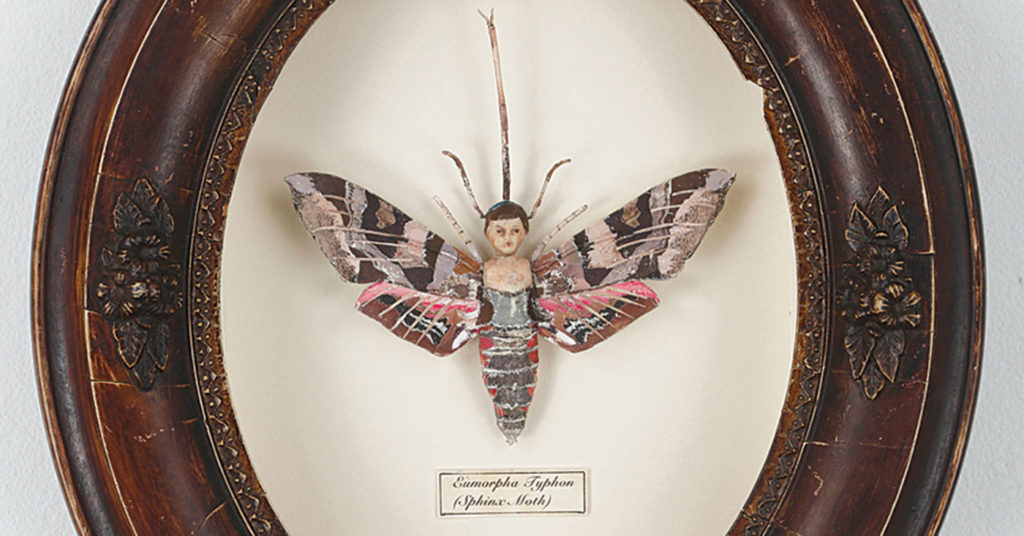 When you think of Tom Pfannerstill’s art, you do not envision paintings. But Pfannerstill, well-known for his trompe l’oeil trash sculpture, has assembled a collection of acrylic-on-panel paintings of night scenes. Fortunately, the exhibition title “Night and Day” hints at the change and highlights the contrast with co-exhibitor Caroline Waite’s mixed-media pieces.

Pfannerstill’s new black paintings are a delight. He started out by painting the panels completely black, and then added colorful dots resembling strings of undulating Christmas lights. Many are based on photographs of urban night scenes, such as “Ali Center and River West.” An aerial view, “Black #2 On the Way to NY (City Lights),” is one of his paintings based on photographs taken from airplanes.

A departure from his use of dots is found in “Moon over Mojitos.” His use of dark clouds brightened with formations of gray backlit by the moon is a superior light study.

“I really don’t know where these are going, but I certainly want to do more,” said Pfannerstill. “This is not an end to the trash series … just a break, but I feel there are more of the black paintings to come. Time will tell.”

Waite is in familiar territory. She’s one of our area’s best assemblage artists, a job that requires supply bins of what most people would call junk. Her pieces on display are, for the most part, collaged insects resembling moths and butterflies.

Many of collages are not painted but are composed of cut-out pieces and found objects, such as “Miraculous Discoveries” and “Sphinx.” This type of art, with all its minutia, is laborious. Or as gallery co-owner Billy Hertz laughingly said, “She’s just nuts. Anal-retentive with capitals all the way across.”

Waite said she asked Pfannerstill to be her exhibition partner because she has long admired his work. “I felt that we were kindred spirits in the sense that we both work with a wide variety of media and like to move between different ideas and approaches. But then he surprised me …”

Viewers will be surprised too if they show up at Galerie Hertz uninformed.

“At first, I wondered how our pieces would look together on the walls and whether there would be any connection between our work,” Waite said. “‘Night and Day’ popped in to my head because it’s a phrase which represents total contrast …”

Pfannerstill said the show was planned months ago, but they each arrived with work not typical for their past repertoire. “Yet we were really surprised and happy with how good the work looked together. It looks really wonderful, if I do say so myself,” he said.

Whatever her reservations were at the beginning, Waite is happy with the resulting exhibition. “The minute we saw our work hanging alongside each other, we both realized, without really knowing why, that it looked terrific together. There’s definitely a visual connection.”

Works by Rachel Ray are also on display.