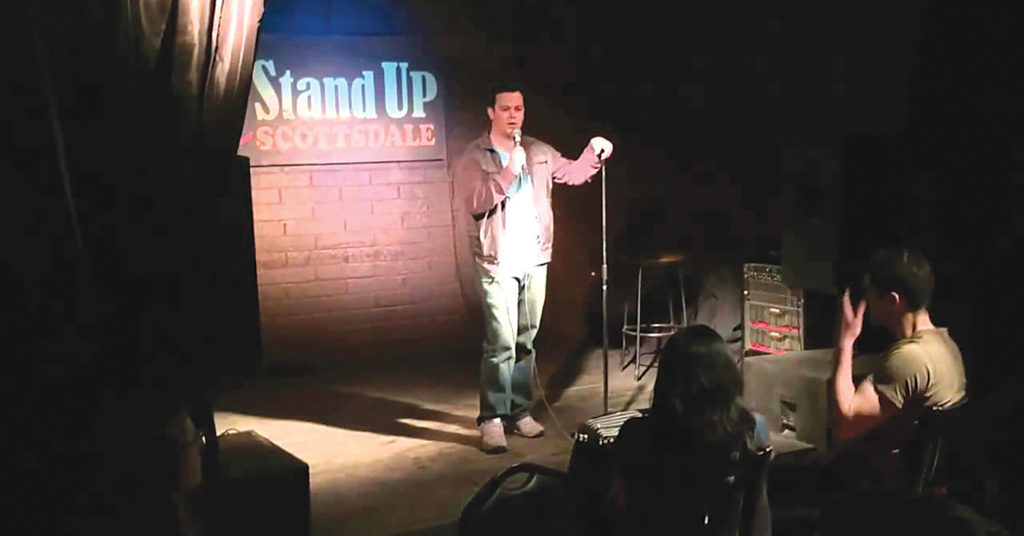 Michael Turner was born and raised in Cincinnati but left at 19 to attend Arizona State University in Phoenix, where he began performing stand-up comedy. In his relatively-short career — he started performing comedy in 2012 — Turner has become one of the stand-out comics in the Phoenix scene. He also cohosts a weekly podcast with his brother, John, called “Turner Brothers.” The two often try to discuss life, love and setbacks, but mostly they end up coming back to movies, music and sports. This week — along with fellow Phoenix-based comic Shapel Lacey — Turner is launching the “48 Hour Tour.” A mini-tour that is exactly what it sounds like: a two-day run of shows that will make stops in Cincinnati and at The Laughing Derby in Louisville. This show offers a chance to see two comics who will undoubtedly be the future of stand-up. Turner took a few minutes to sit down and talk to us about the tour and his Cincinnati roots.

LEO: Do you remember your first time on stage? What was it like?

Michael Turner: I was always pretty confident that I was the funniest guy in any room that I walked into. And the first time on stage is very humbling. It lets you know that it’s a lot harder than walking up there and just being funny. It wasn’t a total disaster. I had a few chuckles here and there. But it was definitely a lot harder than I thought it would be.

How long did it take you to figure out this would work?

Honestly, in the first few months. People were coming up to me thinking I had been doing stand-up a lot longer than I had been. The positive feedback sunk in, and, within the first six months, I realized, ‘You might be good at this if you work at it.’

Where did the idea of the ‘48 Hour Tour’ come from?

Shapel and I both have a big following here in Phoenix. We both have Midwest roots, I’m from Cincinnati, and he attended college in Kentucky. So we decided to do this tour and return to the places that are very much a part of who we are. I live in Phoenix, but my comedy and my sense of humor are still very much rooted in those Midwest values I was raised with. And, with that in mind, we wanted to expand beyond Phoenix. We wanted to remind these places that gave us so much that we haven’t forgotten about them.

How do you feel like your comedy styles and Shapel’s compare to one another?

The thing with Shapel is he is a really fit guy, a former cheerleader who stays in shape. So, in some ways, he can look kind of intimidating. But when he gets on stage, he has a very bubbly personality. He has this optimistic outlook on life. Whereas, I come in and have been described as very dry, satirical and cynical. I don’t think I have a negative perspective on the world. I like to look at myself as a realist. He talks a lot about his life. I question religion, politics and our surroundings.

So do you have any questions about Donald Trump taking office next month?

You know what I try to do? I don’t think it’s fair to point blame at one person in this whole political scheme. I question the whole thing. Because it’s unfair not to question Hillary [Clinton], as well, right? Because that’s someone who definitely has some skeletons in her closet. So I question the whole system and the lunacy of it.

Like yourself, some of the most-revered comics in the industry — like Kathleen Madigan, Jim Gaffigan and Hannibal Buress, to name a few — all hail from the Midwest. What is it about that region that breeds so many funny people?

A lot of times, we’re an afterthought, especially when it comes to the media, and I think this last election is a great example of that. They look at the Midwest as the middle of the country and an afterthought, when really it’s the core of America. Look, the middle of America just determined the outcome of the election. Meanwhile, both coasts are trying to figure out how the hell that happened, because they’re very disconnected from what’s going on everywhere else. The people in the Midwest are very humble but are very observant of the lifestyles we’re exposed to. You can’t be an Everyman and be from New York or California. The Everyman is someone who works hard, loves their family and appreciates their neighbor — that’s the true Everyman — and that’s exactly what the Midwest taught me.