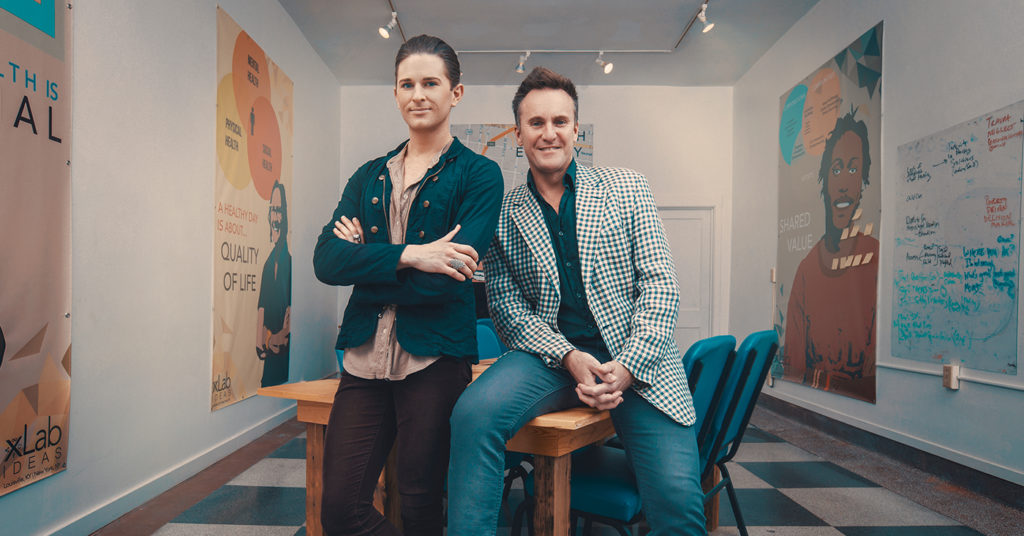 “There could be this magical place where people could go for everything and feel safe and accepted and know that who they are is totally great – even if it’s in this one-block radius, they’re there,” smiles Anna Giangrande, program director at Louisville Youth Group. What she’s referring to is Louisville’s first ever LGBTQ+ Community Center, which is the ultimate five-year goal of the newly formed LGBTQ+ Community Coalition. Several dedicated representatives from different community organizations have recognized the need for a center or at least some sort of collaborative where the various nonprofits could work together, but two of the individuals who are taking these very possible ideas and actually facilitating them into reality are Josh Miller and Theo Edmonds of IDEAS xLab and Creative Agents of Change Foundation.

The genesis of the coalition came when Giangrande ran into Rachel Lighter of Transwomen National one night. Though the concept of a coalition or a center had been discussed before, there was something about this night that solidified it in Giangrande’s mind as a true, concrete aspiration. The two talked about the needs for what Giangrande calls “a one-stop shop” where various LGBTQ nonprofits could come together, utilize each other’s resources, work together on planning events and provide a safe and collaborative space for the different organizations and community at large.

“I’m the kind of person who when I decide I’m going to do something, I just do it,” Giangrande affirms. “So we talked about it, and I said, ‘I’m going to do it. I’m going to send out an email.’ I don’t know if [Rachel] thought I was for real or not, but I did it!” That email gained the immediate support of the Kentuckiana Pride Foundation as well as Transwomen National. The groups convened and started discussing what exactly it was they wanted to accomplish, but once Miller and Edmonds joined the conversation, the stakes suddenly got much higher.

Edmonds originally had reached out to Giangrande after hearing about the important work she was doing in the community – with Louisville Youth Group as well as the coalition. At the time, the regular coalition meetings were consisting primarily only of Giangrande along with Kentuckiana Pride Foundation board members Allen Hatchell and Aaron Angel, but with the passion of the group as fervent as ever, Edmonds was ready to help put a plan into action based on the groundwork the group had laid. “They at the time were talking about just forming a new nonprofit essentially where all the nonprofits could work together,” he recalls, “and since that’s in the wheelhouse of IDEAS xLab, I said, ‘You really want another nonprofit? Is that what you’re looking for?’ And no, what they wanted was a new community center. And we started to talk about what that meant and the social, emotional and physical well-being of the LGBTQ community and what that could look like. And that’s how we started on this five-year plan.”

“I don’t know if you’ve ever had a conversation with somebody where you walked away and you just knew everything was going to change, but that’s how I felt after my conversation with Theo [Edmonds],” Giangrande recounts. Indeed, while the coalition already had tremendously strong footing and was on track to effect real community change, this project fell right in line with what IDEAS/CAC does on a daily basis and consequently made Miller and Edmonds natural fits as partners in the project.

“Essentially what we do – we’re a bridge-builder and a facilitator,” Edmonds describes. “And so we’ve got a lot of very strong conceptual frameworks that we’re able to bring to the table to help people think through things that are, by their very nature, messy. When you say a community center, you could talk to five different people and you’re going to have five different conceptions of what that means based upon what their own personal lived narrative is. And so what we do is help sift through all that information and use it and put it in a workable form that can be used to build upon, and then eventually, we will help with the fundraising and actually engage some artists at some point too who can actually help us move the project forward and tell the story.”

“A lot of the work specifically with IDEAS that we’ve been doing is serving as a backbone to bring different sets of partners together – just in the way that we were formed and the way that we operate – partnerships and working across different sectors is vital to what we do,” Miller echoes. “But Theo and I are artists, so we think in a little bit of a non-traditional way. So bringing that type of thinking in partnership with Louisville Youth Group and Kentuckiana Pride and the different partners and lending the support of the type of project and structure and framework that we normally do is one of the things that we’ll offer.”

It’s that breadth of knowledge and experience in realizing community goals that work toward the overall health of society that truly illustrated to the preexisting coalition partners how genuinely integral IDEAS/CAC’s involvement was going to be. “Prior to Josh and Theo joining the coalition, we were moving along with the project, but they helped to better define it and accelerate our progress,” explains Allen Hatchell, secretary of the Kentuckiana Pride Foundation’s board of directors. “They bring tremendous knowledge and resources that we need to be successful. Having a true understanding of health equity and the well-being of our community is important to the success of the center. We must meet the needs of the people we will serve, and the only way to do that is to connect with those people in the beginning and allow them to give us the framework for our foundation.”

One of the first steps toward putting these conversations into action was announcing a series of town halls to take place over the fall and early winter of 2016 to hear thoughts from the community itself regarding what kind of shape this LGBTQ+ center should take. And the coalition is emphatically making concentrated efforts to ensure they hear from the whole community, including people of color as well as the disabled, elderly, rural and others whose voices are not always heard as they should be.

The first town hall was held on September 28 at PLAY Louisville, and with a crowd that surpassed expectations, it seemed more believable than ever that this plan was going to be not only successful but resoundingly celebrated.

“It was very surreal at our first town hall to go from talking about these things and planning it to seeing people interested in it and showing up and excited to give their information,” Giangrande enthuses. “I’m like, ‘Here we go. This is happening. We’re going to help make this for everybody, and that’s going to be so fabulous.’” Hatchell was equally encouraged and reaffirmed in the coalition’s ambitions: “The ideas and discussions that came from that event really showed us that we were on the right path, that health is greater than just the physical and our programs and services needed to be holistic to meet the financial, social, emotional, etc. needs.”

Miller meanwhile notes that the diversity in attendees, which was possibly thanks to the coalition’s specific outreach, was particularly impressive, and that’s something that Edmonds insists is of the utmost importance in moving forward with the plans for the center. “I think more than anything these town halls, yes, they will help us to create a community center that people all feel that they have a hand in – those who wish too because we’re not going to convince everybody – but more than anything else, my hope is that what this does is over the course of the five years – and this will be an evolutionary process – is it shows how truly diverse and rich our community is in its variations and its personalities. … And the LGBTQ community is not represented by upper-middle-class white men. It’s just not, and I think there’s a tendency in the media and others to represent our community from that very one demographic. And that is only a sliver of who we are as a community.”

Following the town halls of 2016, the coalition hopes to travel to other cities with strong LGBTQ centers, such as Los Angeles and Nashville, and study their sustainability model, their offerings and how they were able to appropriately and successfully meet the community. Then in the fall of 2017, further town halls will be held to synthesize that information and put a comprehensive plan in place so that the team can move into 2018 ready to fundraise.

Edmonds certainly looks forward to being able to pare down the seemingly endless pool of possibilities and defining the center, for the end product will be so much more than just a place of collaboration for the LGBTQ community: “Having a place like the community center where that positive expression can happen – that’s a very beneficial thing not just for the individual but for the entire community because an individual who is able to more fully inhabit their person and who they are is going to be a much more contributing person to society around them, so everybody’s going to benefit from it.”

Giangrande similarly anticipates witnessing how the center will be able to change the city – how not only its LGBTQ citizens will have a place of resource and empowerment but also its society as a whole will see real and noticeable positive growth. “Everything I’m putting all my energy and effort toward in my days is going to help the people of this community and improve the community, and that’s a very satisfying feeling,” she maintains. “I just can’t wait for it to open and for people to have their space and see how that will change things for us as a city.”

Miller relates that there are about 20-30 different LGBTQ-oriented nonprofits in the city, and the goal over the next year or two is to get every single one of them on board as a partner. Modern Louisville has already joined, and it’s certainly not too late to add your name to the list; becoming a partner in this project and ensuring you and your organization are proactive components of this conversation is one of the most critical aspects to its success. As Miller emphasizes, “Once the doors open on the center in 2021 – or whichever year it ends up being – we want everybody to walk in and say, ‘I have ownership in this because I helped to build it.’”

For more information on how to become a part of the LGBTQ+ Community Coalition, visit lgbtqlou.com.