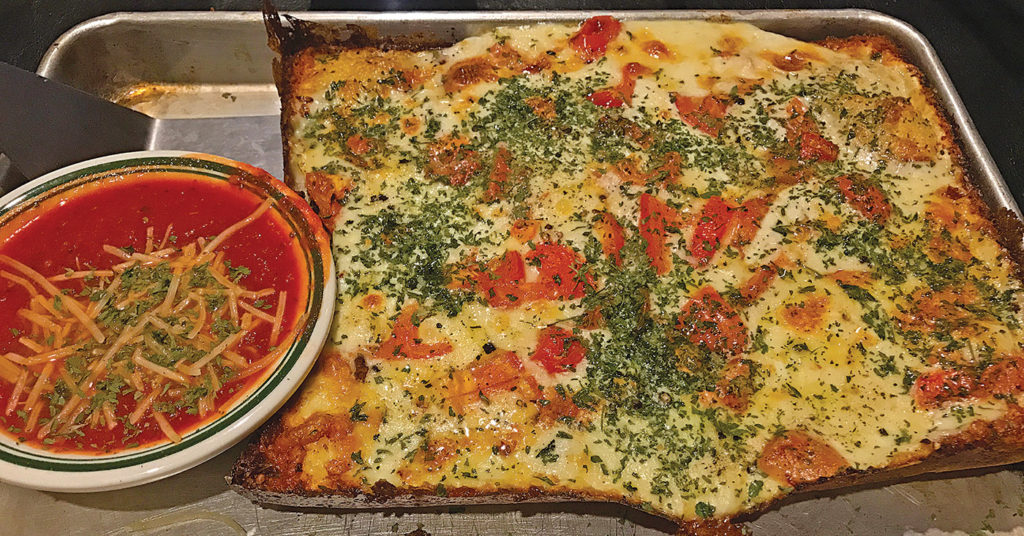 Ahh, Loui Loui’s! Or “Louie Louie”! Delicious Detroit-style pizza or briefly-controversial rock classic of the ‘60s. I love them both, don’t you?

“Louie Louie,” the song, enjoyed its moment of fame a half-century ago, exactly 50 years before Loui Loui’s, the pizzeria, opened in Jeffersontown. The Kingsmen covered Richard Berry’s catchy 1957 tune in 1963. By the end of that year, it hit Billboard’s Top Ten, and Indiana’s then-governor, Matthew Welsh, listened closely and decided that he could make out dirty, filthy, pornographic words in its lyrics, which most normal people found basically unintelligible, but great for dancing.

Indiana never actually banned the song, but the uproar likely didn’t hurt the popularity of “Louie Louie” one bit. Welsh was a Democrat, as it happens, but his uptight attitude and authoritarian instincts remind me of more recent Republican Indiana governor who’s headed for Washington right about now, which makes this all timely again.

Detroit pizza had already been around for a while when “Louie Louie” hit the charts, having been created at Buddy’s Rendezvous in Detroit in 1946. But it took this offbeat, yet appealing, kind of pie a lot longer to break out to acclaim beyond the Motor City’s limits. Louisville got its first taste three years ago when Loui Loui’s opened in the Jeffersontown quarters that Ferd Grisanti’s had memorably occupied for 25 years, and it seems to have made a comfortable home there.

Meanwhile, we can now assert that Detroit pizza has made it: You can get it in New York City these days, at Emmy Squared in Brooklyn’s hip Williamsburg neighborhood, The Wall Street Journal reported, apparently aghast, in a June 22 report. “This is Detroit-style pizza, and its arrival in the New York market is sure to further the endless, divisive discussion among locals about who does pizza best.”

There’s no controversy in Louisville. Loui Loui’s fills its ample space with happy crowds just about every night, drawn not only by thick, generously loaded pizzas in rectangular steel pans, but also a good selection of family Italian pasta, an appealing bar program focused on craft beer and an extensive bourbon and liquor list. Music is a draw, too, with bands most Thursdays and Saturdays; and Ferd’s former chef, Vince Grisanti, often shows up as a guest in the kitchen.

In memory of “Louie Louie” and in search of delicious pizza, we journeyed out to Loui Loui’s last week. We found a cozy environment in its long, beige-walled main dining room, and a band — or maybe it was a combo — playing in the front of the room, inspiring impromptu dancing in the front of the house without playing loud enough to hamper conversation at our table. (The music cranks up a bit later in the evening, we’re told, so make your plans accordingly.)

A couple of appetizers got everyone in good spirits. A trio of arancini — prosciutto — and cheese-stuffed deep-fried risotto balls ($10.49) — were each big enough to split between two people. I guess you could eat a whole order of these golden-brown, savory delights with marinara an cheese for dipping, but you might not have enough room left for pizza or pasta, and that would be a shame.

“Amazing cheese sticks” ($7.99) really were exceptional. A stack of dark golden-brown cylinders that looked like small corn dogs were stuffed with warm and runny mozzarella, cloaked within a thick, crispy cloak of grease-free breading.

A Caesar salad (free with an entrée) and a house salad ($3.99) were both passable, with fresh greens and large, crisp croûtons.

A bountiful bowl of lemon-pepper chicken over fettuccine ($13.99) hit the spot, with long pasta cooked properly al dente, tossed with tender slices of boneless chicken breast, topped with grated Parmesan and minced parsley, and dressed in a gentle lemon and olive oil sauce, a short shake of red-pepper flakes and a few capers.

A “four-square” (small) Margherita pizza ($13.99) demonstrated the Detroit style: If you like the Italian-bread crust of New York or Neapolitan pies, you’ll miss it here, but the trade is more than fair: There’s good bread on the bottom, while the edges are rich and buttery-crisp where crust met steel heat. The taste experience of this Italian-flag-color red (tomato), white (molten cheese) and green (basil) was appropriate for a traditional Margherita, named after 19th-century Italian King Vittorio Emmanuele’s queen; but I like this pie best in summer, when it shows off the seasonal delights of fresh tomatoes and basil.

Limoncello mascarpone cake ($6.99) was sweet, silken and delicious. It was also the third, very similar cake we’ve had at three different restaurants recently, suggesting that this tasty dessert is riding the crest of a sweet-treat trend. The crisp, appealing cannoli of the week ($5.99) was filled with Reese Cup bits, not traditional but I’ll take it.