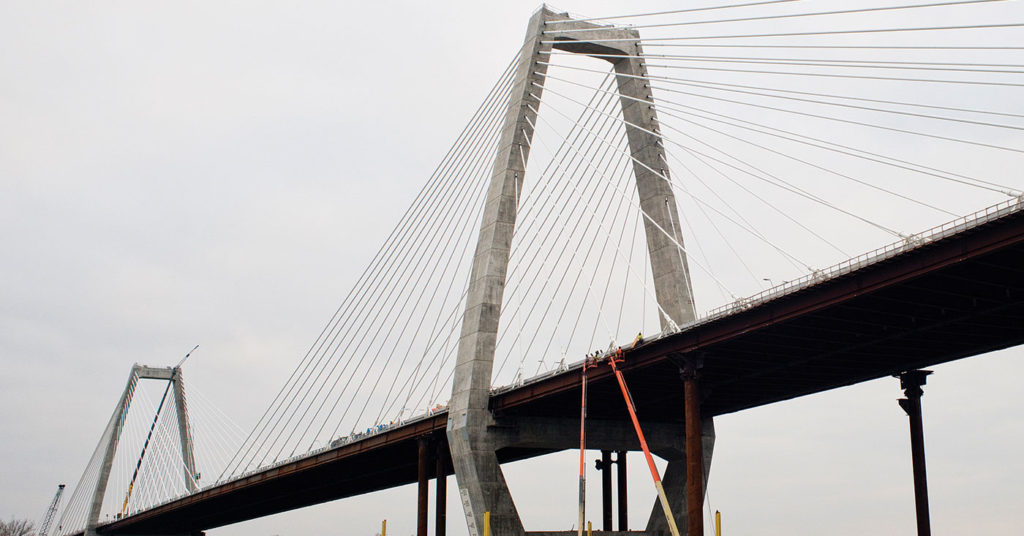 Back in the late 1700s, more than 200 years before the East End Bridge loomed above us all, settlers were making their way across the Ohio River from Harrods Creek to Utica, Indiana, by ferry.

The early 1800s trips were less than $2, although a dime in 1775 is worth $2.90 today, so it’s all in the inflationary math. No transponders were required. There were no Bridge Police to send you a bill, threaten to confiscate your flintlocks and mules, or send you to debtor’s prison if you didn’t pay.

Few people considered making 20 roundtrip ferry boat trips per month to cut the fee to a nickel. Nor was a frustrating, maddening, three-year, traffic-clogged wait required to get the ferry up and across the river. There wasn’t even a Prospect, Kentucky, back then; it didn’t incorporate until 1974.

Those earliest ferries were clumsy, five-passenger canoes. That led to skiffs of all sorts and descriptions hauling wagons, livestock and homespun settlers. The ferries were needed to help the pioneers head west while avoiding the very temperamental Falls of The Ohio, 10 miles below.

In those pre-locks-and-dams days, the river was much more skinny, and shallow. The skiffs were powered by young men with long sticks. In winter, you could walk across on ice. In times of severe drought, you could ford it.

The late 1700s ferry boat owner, and Utica founder, James Noble Wood — who was from, go figure, Utica, New York —also built a hotel on the Hoosier side for his transient guests. He would apparently leave the lantern on for them.

Once leaving Utica, hundreds of pioneer wagons made their way up what’s now Old Salem Road behind town to the wide-open spaces of the Northwest Territory — or at least Illinois. Headed up from the river, they would pass the exact point that will now mark the first I-265 bridge exit on the Indiana side.

And even back then, somebody surely stood along the Ohio River, gazed across at the distant shore, and thought, “Damn, wouldn’t it be nice if there was some sort of bridge here.”

Well, it’s here. And loom above us it does. In every way. It’s going to open on Dec. 18, roughly three years in construction, and only 60 years after it was first mentioned as part of the President Eisenhower’s Federal Aid Highway Act of 1956.

But who’s counting, or remembers that an East End Bridge was once proposed as an extension of the Watterson Expressway over to Indiana at Six Mile Island? Now it’s been pushed up closer to Twelve Mile Island.

If you’ve not been keeping score at home, the endless delays and litigation ran the cost up to $484 million for The East End approach, $242 million for the actual bridge, and $227 million for the Indiana approach. Plus, another roughly $100 million for incidentals. Bond interest to follow. All of that making its total cost $1.1 billion dollars, and change, in a three-bridge project cost of about $2.3 billion.

You can’t even call it pocket change — it’s all tolls. But you can find some consolation in that. The once-projected total cost, with all the bells, whistles, concrete, three-lane tunnels and swooping flyovers, was $4.1 billion. So, you could almost say the $2.3 billion is a bargain. And the much more accessible Spaghetti Junction has been flattened out to Arched Celery.

So, as we have all learned, we don’t rush our bridges around here. Nor can we build them without those dreaded tolls. And it hasn’t just been river crossings. Utica Pike which leads from Jeffersonville to Utica, was also once a toll road, among many other such on the Kentucky side. You want progress? It’s taxes or tolls, pick your poison.

And it will be interesting to see how many who try to avoid the upcoming tolls on the new bridges by using the Second Street or Sherman Minton bridges, will hold to that pledge as traffic and time pile up.

We joke about the possible names for the new bridge, and Indiana gets the call. Will it honor David Letterman, Kurt Vonnegut, Hoagy Carmichael, William Henry Harrison, Florence Henderson or Dan Quayle?

What’s different now on the Indiana shore, is that when you drive up Utica Pike you can see the towers of the new bridge rising high over the town. At night, the warning lights on top glow red in the distance. During the day, the suspension cables gleam in the sunlight like heavenly harp strings.

That’s the story: Looming change. Utica, our home for 41 years, has a population of about 800 people, although it recently annexed about 550 acres more land to try to control its future. Give or take a disastrous flood, Utica has pretty much dodged history for most of its 200-plus years. Now it’s in the middle of it.

On the Kentucky side of the bridge, which is already more developed, the landscape changes may not be as dramatic, although people living close to the edges will certainly be impacted by noise and traffic — and already have.

The Louisville-based Coalition for the Advancement of Regional Transportation, River Fields, the nonprofit river conservancy advocacy group, and other bridge opponents did their best to hold off progress for many years. Opponents claimed the Drumanard Estate in the bridge’s path had historic preservation rights due to a garden being built by the famous Frederick Law Olmsted firm (Cherokee Park and New York’s Central Park, etc.). It turned out a design was created by an Olmsted firm, but that garden was never built, one architectural historian said.

Meanwhile, the twin, 1,800-foot tunnels burrowed beneath the estate cost about $338 million. Adding financial insult to injury, the Kentucky Transportation Cabinet five years ago paid $8.3 million for the 1929 house and 50 acres of land. In 2016 the state was willing to take $3.5 million for the same estate and land, with no takers. Your tax dollars at work.

The legal pursuit of bridge-prevention was finally shot down in July 2013 when U.S. District Judge John Heyburn II dismissed an environmental lawsuit. About a year later, the 6th U.S. Court of Appeals, in a unanimous decision, upheld the dismissal of efforts to halt bridge construction, saying the opponents “failed to raise a single factual issue to support its allegations.”

So here comes the bridge, and the entire Southern Indiana region where the new I-265 will come across is already feeling the boom. Shopping centers are already stacking up along IN-62, and hundreds of acres of grassland have been scraped into red clay.

Nearby Charlestown is also readying for a growth spurt, but the biggest boom can be seen and heard at the 6,000-acre RiverRidge Commerce Center. Carved from the 10,000-acre Army Ammunition Plant, RiverRidge is now adding a $13 million, 300-acre RiverRidge Gateway project at the I–265 and Old Salem Road intersection behind Utica.

The road that once witnessed creaky covered wagons will soon be hosting a complex of office space, event space, a five-acre retention lake and walking trails. It’s also at the point where the pedestrian and bike path being built across the East End Bridge will empty on Old Salem Road.

Where what was mostly abandoned buildings and weeds five years ago, RiverRidge now boasts of 1,100 acres sold for development, and a surge of new business and warehouse buildings ranging from 22,750 square feet to Amazon’s 1,015,740 square-foot behemoth. The RiverR idge labor force now includes about 7,500 employees, with Amazon helping to push that up to 10,000 in the holiday season. With more buildings and thousands of jobs to come.

The economic happiness has also spread to the nearby Port of Indiana just below Utica. POSCO, a multinational company headquartered in South Korea, and the sixth-largest steel producer in the world, is building a $19 million, 120,000-square-foot facility with 60 high-paying wages.

A new heavy-haul road is scheduled to be built between River Ridge and the Port of Indiana to facilitate future development between the two. And on a clear night, POSCO employees will be able to see the red lights glowing from the towers of the East End Bridge.

Realtor Barbara Popp of Schuler Bauer Realty, who has sold Kentucky and Southern Indiana property for more than 30 years, stressed the regional importance of the East End Bridge to an area still coming out of the 2008 market collapse.

She said that housing prices in Indiana remain lower than their counterparts in Kentucky. Many of the new jobs at RiverRidge are paying blue-collar wages, and not that many high-salaried jobs come with them, but she is optimistic about the future, and the growth of housing market in middle- and high-income homes. Southern Indiana is slowly becoming a destination for some Kentuckians, and people from out of state. The East End Bridge makes that commute all the easier.

“It’s a no-brainer,” she said, “The bridge and RiverRidge will cause our area to prosper and grow.”

Utica’s outer edges will be part of that. We who have long supported an East End Bridge, the need to finish the eastern loop around Louisville, will have to live with what the bridge brings, including the hum of highway traffic on the bright, clear quiet days.

It’s all about geography; being in the path of interstate progress. There’s the obvious economic benefit to local business owners like me, coupled with the increase in traffic and clutter; the change of pace, and place.

It’s already begun, with snug housing lots along the river selling for well over $100,000, and an old quarry the site of higher-income houses below and above.

A long row of newer, larger homes built along the river’s edge in the last 25 years has already gentrified the town. Just this month a new subdivision was started on Old Salem Road. People are beginning to move down that road toward the river rather than away from it, as they did 200 years ago.

Much of old Utica is in the flood plain, which can limit its development. The town council, with a total budget of barely $200,000, will make every effort to control the growth, to bring in the right kind of businesses, to try to keep our small town as it has been, and wants to be.

Old Salem Road — now a bumpy, undulating blacktop which will be widened into two lanes in the next year — will empty into the middle of town. Opportunity waits for some quaint shops and restaurants. Some change was needed, necessary and good. We’ll know a lot more about where all that goes beginning Dec. 18.