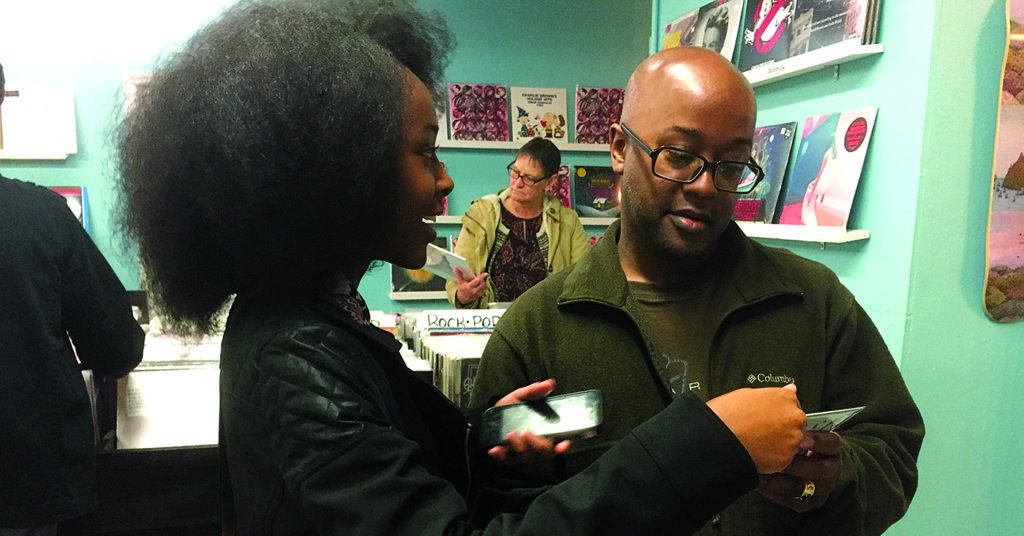 This past Saturday, Dec. 3, a not-so-small feat was accomplished at Guestroom Records. In a matter of just three hours, a locally-produced album outsold every 2016 release at the record store on Frankfort Avenue, including international blockbusters such as Radiohead’s A Moon Shaped Pool, Red Hot Chili Peppers’ The Getaway, and Metallica’s Hardwired… To Self-Destruct. That album, Girls Rock Louisville 2016 Summer Camp Bands, is a product of this year’s Girls Rock Louisville, a volunteer-based music camp that teaches girls and gender non-conforming youth ages 10 to 18 singing, songwriting, guitar, bass, keyboards and drums, and, ultimately, encourages them to form bands. On the last day of camp, each band recorded an original composition, which resulted in the seven songs on Girls Rock Louisville 2016 Summer Camp Bands.

This past Saturday, Guestroom Records held a public listening party for the album — the very first release from Girls Rock Louisville — which resulted in the sale of more than 50 copies.Consisting of songs from More Than Pieces, Flawless Bosses, The Attention Horse, Six Soul Sirens, Shadows of Color, Verschlagen der Puffmais and 3-5-3-7, the record covers a range of sounds and topics, from post-punk dancehall jams reminiscent of the 1980s sister group ESG, as heard on the track “Flawless” by Flawless Bosses, to straight-up punk, such as the minute-long untitled track by The Attention Horse, mirroring the 1970s sounds of Poly Styrene. “It’s about entitled men that think they have the right to objectify women, and how they’re disgusting,” Raven Burns, guitarist and singer for The Attention Horse, said of their track.

“We didn’t tell them what to write about,” said Executive Director Carrie Neumeyer, who founded Girls Rock Louisville in 2014, “but they all wrote these feminist anthems, which is amazing!” This past July, the camp expanded its programming from a weekend to an entire week, teaching the 40 campers to play musical instruments and work in a group setting while building self-esteem through music education. Girls Rock Louisville Music Director Meg Samples, who has worked at the camp all three years, said of the expanded format, “The week long camp was awesome, mainly because I got to know the campers better than when it was weekend only.”

At the end of Girls Rock Louisville 2016, the camper bands met at La La Land Studio on Lexington Road to create the compilation. Recording time was donated by the studio, recorded by sound engineer Anne Gauthier, mastered at Black Lab Audio by Shelley Anderson, with the cover artwork created by GRL camper Laura Mattingly, making the entire production of the album created entirely by women.

Faith Lindsey, 14, of Johnson Traditional School and guitarist of the band More than Pieces, which was formed at this year’s camp, said of her experience, “The camp is so accepting of everybody, noncompetitive, and nonjudgemental. We all encourage each other, even if we all aren’t in the same band.”

“The best part of Girls Rock is that we got a new person in the band,” Kim said of this year’s camp.

And Kia spoke of their time at La La Land: “Recording was cool — it was like how it is on TV.”

Burns has continued playing with fellow camper Joon Spiro in the band Shark Sandwich, which has begun performing around town, a reflection of the bonds made at the camp and its continuing influence in the girls’ lives. As for the aspect of adding the compilation album to the curriculum, Neumeyer said, “We’ve already got La La Land booked for next year and I hope documenting the music from this program will be a continuing element of our programming.”

Bass instructor for GRL, Cheyenne Mize, said of the experience, “It gives me hope for the future of Louisville Music.” •