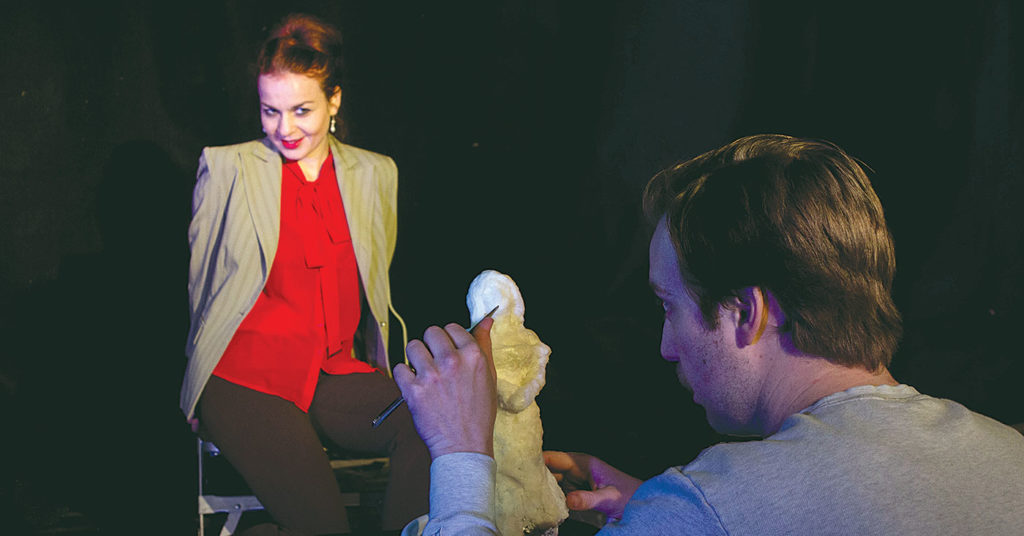 Polina Sharfran as Tekla, and Ryan Watson as Adolph, in "Creditors."Photo by Clare Hagan

Well, you get the idea.

So why, you might ask, are Strindberg’s plays not popular? You could start by blaming theater critics. In 1893 — 20 years before the first American staging of a Strindberg play! — a New York Times writer, in a story about the Parisian premiere of Strindberg’s work, lambasted the Swedish playwright for “making theatergoing a torture and striving to prove in plays that all the world is evil.”

Come to think of it, that might account for the lapse of two decades before Strindberg’s works made it to America.

But it goes deeper than that. Lots of critics are quick to drown Strindberg with labels like “naturalism” and “symbolism,” “misogyny” and “misanthropy.” And I think we can all agree that except for a handful of people — mostly the fictional people who inhabit Woody Allen movies — nobody ever looks up on a Friday night and says, “Hey, let’s grab a pizza and go see that misogynistic symbolist play over at the multi-proscenium.”

Those labels also have a tendency to infect the work of actors and directors. You can just imagine them poring over scripts in search of undiscovered symbolic gems, trying to fit every line and figure of speech into the appropriate mold. It’s grim stuff, that. And it makes for ponderous theater.

I’m happy to report that there’s nothing ponderous about the way Director Martin French and his cast of three are approaching Strindberg’s “Creditors” in the spell-binding Chamber Theatre production that opened last week at Vault1031. This is a production that revels in the shocking, raw newness of a theatrical masterpiece that’s over 125 years old, but would feel like cutting-edge drama if it ran as part of next year’s Humana Festival.

On the surface, “Creditors” is the story of a love triangle — a love triangle, many details of which echo the facts of Strindberg’s bitter, tumultuous first marriage. The corners of this triangle are Adolph (Ryan Watson), his wife Tekla (Polina Shafran) and Gustav (Michael J. Drury).

Adolph is a visual artist. Tekla is a writer whose first novel depicted, and eviscerated, her first husband. And though Adolph is unaware of the fact, his newfound friend and confidant Gustav is, in fact, Tekla’s first husband. Yes, this is a spoiler about a 125-year-old play, and yes, in real life Strindberg’s first wife’s was a writer, and her first husband’s given names were, perhaps not coincidentally, Carl Gustaf.

As the play opens, we find young Adolph and his new friend Gustav in a parlor as Adolph works on a sculpture of a woman. As they discuss the nature of art, love and power dynamics within marriage, Adolph’s ostensible mentor demonstrates a preternatural understanding of Adolph’s relationship with Tekla. In the guise of a wise mentor, Gustav suggests that Adolph’s recent bouts of vertigo are caused by a morbid power imbalance at the heart of his marriage. He even prescribes a cure. Months of celibacy are required, he says — otherwise Adolph is doomed to become an epileptic. For us, that prognosis sounds silly, of course. But Gustav’s — which is to say Strindberg’s — parsing of the psychology and psychopathology of love is flat amazing inasmuch as it’s among the first dramatic explorations of what was then a barely emerging theory of the human psyche.

In the second half of the play, the story flips to another gear as Gustav and Tekla reveal the inner workings of their own intricate relationship.

Both halves make for deliciously heady theater. Strindberg was a master of setting and springing subtle traps — and watching them snap shut is a cruel guilty pleasure.

But apart from Strindberg’s virtuosity, the execution is marvelous.

Theater-in-the round is common enough, but this is theater in the gauntlet. The audience is seated facing inwards from the long walls of the Vault1031 rectangular performance space. We’re on the same plane as the actors — and just a few feet removed as they move up and down the narrow space. It’s a unique setup, risky and strange, that brings us into the action in a way I’ve never before experienced — and it calls for extraordinary acting from Drury, Watson and Shafran. All three pull it off. Drury’s suave villainy is persuasive and plausible. Watson’s slow collapse into neurotic destruction is finely tuned. And Shafran  has an easy command of Tekla’s weaponized femininity and all the tools Strindberg imagined a woman might wield.