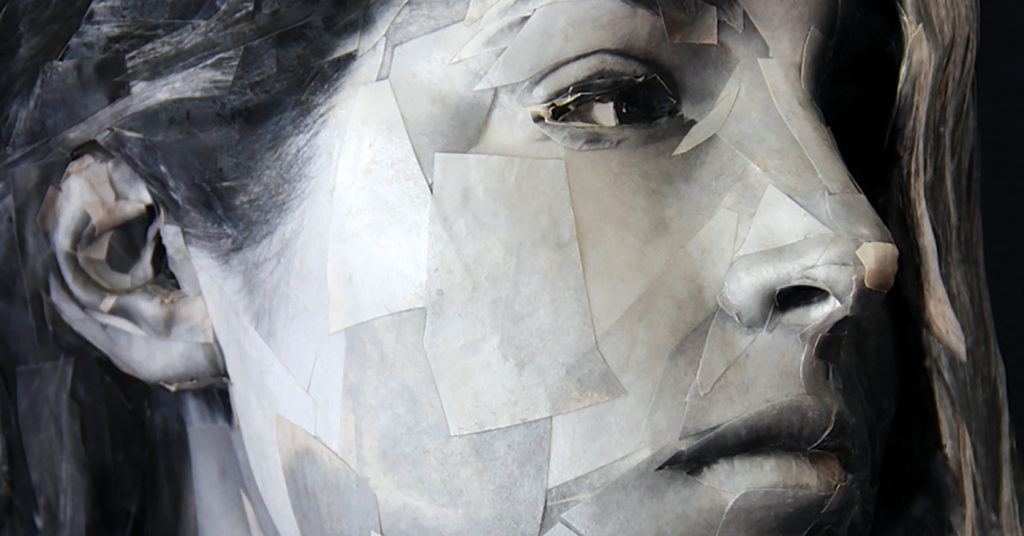 The photographs are not what they seem in “Visio Obscuro,” subtitled “An exhibition of puzzling portraiture.” Matt Gatton is not just a photographer: He’s also a sculptor. At the same time. Now, he’s a photographer again.

This labor-intensive technique, called photo-sculpture, or photo-craft, starts off with Gatton photographing his sitters from all angles. He then makes a portrait bust in plaster or papier-mache of the subject. What makes Gatton’s process unusual is that he then combines the two media, adhering strips of cut-up photographs on the bust. It can take up to one year to complete a work.

“Combining the two-dimensional veracity of photography with the three-dimensional reality of sculpture enhanced the perception of presence and essence in the piece,” said Gatton. “The face was en-vivified. It seemed as if about to speak.”

He created photo-sculptures from 1989-2001. Unfortunately, Gatton’s health deteriorated soon after, leaving him unable to make his art.

“It’s been seven surgeries and more than a dozen failed medicines since my last exhibition,” he said, regarding his Crohn’s disease. “When Naomi [Stuecker, curator] called and asked if I wanted to have a retrospective exhibit, I had been unable to eat or drink without great difficulty for months … I agreed to the show, and it was almost like I had been summoned back to life.”

“People think they are Photoshopped,” Stuecker said. “Condensing a person into two-dimensional photographs, translating them back into the third dimension with a sculpture and then recondensing it back to the second dimension again, a dimensional accordion, if you will, causes the image to take on an otherworldly countenance.”

The images, composed in series, enable the viewer to see the sitter from several angles. The “Wake” series are of photographer Phil Wakeman. He seems to be covered in bandages, except the strips have facial hair and wrinkles. He’s a person literally being held together.

“Barbie,” featuring Gatton’s sister, has the same disconcerting effect. Her flowing hair looks to be falling apart. Or is she coming together and we are seeing her in the process of formation?

I found the best way to view the images was to start with the eyes. It reminded me that I was looking foremost at a photograph of a person. Gatton takes great care with the eyes, creating a focal point in each disjoined image.

“Re-photographing each sculpture was a joy,” he said. “Some of the artworks needed touching up, and it was a delight to make the repairs and reunite with these old friends.”

The closing reception is on Wednesday, Jan. 4 from 5-7 p.m. All the works are for sale with 10 percent of the proceeds going to St. Francis High School.

Makers’ Crucible is located in the lower level of the Luckett & Farley design firm.