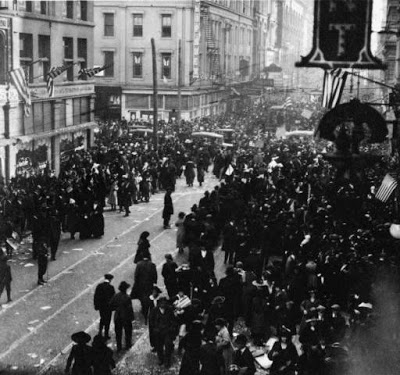 On Nov. 23, 1918, the Saturday before Thanksgiving, a parade was held in downtown Louisville to commemorate the end of the first World War.

Ten thousand troops from Camp Zachary Taylor, as well as marching bands and civic groups, made their way from Clay Street and Broadway past the courthouse, ending at Central Park amidst tens of thousands cheering Louisvillians, according to The Courier-Journal.

This was the first official parade in Louisville commemorating the victory of the Allied Powers in World War I, but two previous, unofficial celebrations were also held in Louisville. The first, on Nov. 7, was described as a “riot of joy” by The C-J, after a fire station bell was rung and mistakingly taken as notice for the end of the war, creating an impromptu parade down Fourth Street.

The second parade occurred on Nov. 11, Armistice Day — the actual day the war ended — and was organized by Courier-Journal publisher Judge Robert Bingham. It spilled into the street, with thousands joining the parade for half a mile and included fireworks and a lynched effigy of Kaiser Wilhelm II, with a sign that read “Damn His Damn Hide” hanging from The C-J office windows.

“This Week In Louisville History” is a weekly column written by John King that runs every Monday, highlighting Louisville people, places, and events that have shaped our city over the last few centuries. John King is a culture writer and consultant living in Louisville who also writes and edits a world cultural history website called “This Day In Pop Culture.”