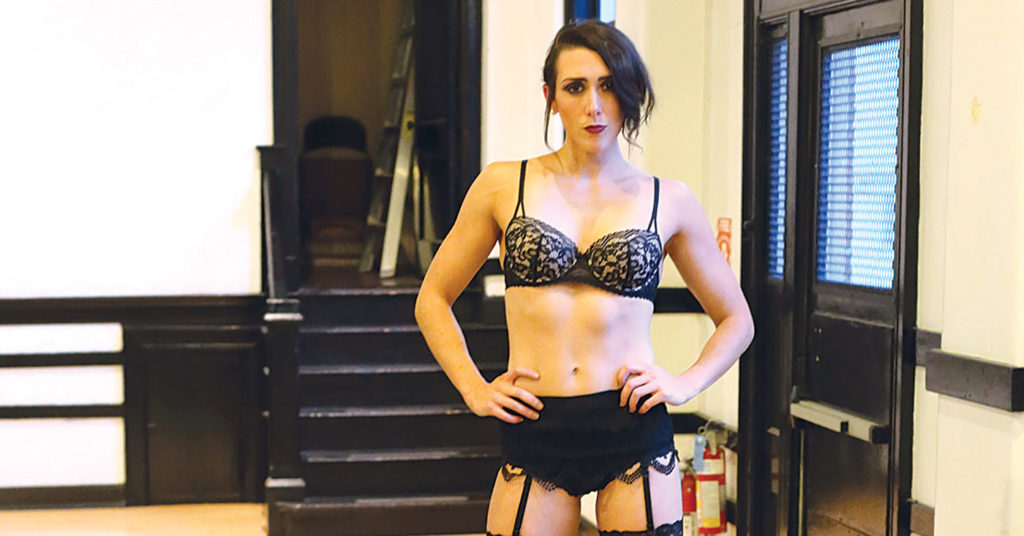 Victoria Reibel in "Venus in Fur"

That’s not to say that stupidity can’t be popular. Only a fool would think otherwise — and, as the governor of the Commonwealth recently noted, the film version of the novel drew scads of folks to multiplexes all over the country.

David Ives’ play “Venus in Fur,” which premiered in 2010 (before the waves of “Grey”) was never, I suppose, destined to achieve that kind of popularity. True, it delves into issues of sex and power. Its topics include domination and masochism. Its title and subject matter invoke a 19th-century novel by Leopold von Sacher-Masoch, from whose name the word masochism is derived. And it, too, was made into a film, this one directed by Roman Polanski, that you likely didn’t see in a theater (it earned about $5 million at the box office, compared with over $500 million for “Grey”).

All the more reason to see the excellent Liminal Playhouse production now playing at Vault1031, under the direction of Tony Prince.

Structurally, “Venus in Fur” is an intricate play-within-a-play (and if you suggested to me that it actually goes three plays deep, I wouldn’t argue). The play opens with Thomas, a playwright/director (Gerry Rose) fulminating about his inability to cast the lead in his new play — based on Sacher-Masoch’s novel. To hear Thomas tell it, actresses as a class are incompetent, infantile, unprepared and incapable of simulating either femininity or correctly pronouncing the word degradation.

Just as he’s giving up, a strange, leather-clad, foul-mouthed creature, dressed and made-up like a refugee from a Goth-rock festival arrives at the door. She’s dripping wet, abominably tardy and bearing tales of woe to explain why she’s late (if indeed she was ever on the audition list). But Vanda (Victoria Reibel) is not one to be turned away. And in a fine comic sequence (note: sucking up to a playwright is more likely to be effective if you know which plays he’s actually written), she’s manipulated Thomas into letting her read — but only through page three.

By the time they get that far, Thomas is in thrall to Vanda’s work and her startling mastery of a script that she’s only briefly skimmed (she claims). It’s quickly clear that Vanda came well-prepared for this audition. First she strips down to the requisite black bondage-chic lingerie (complete with dog collar) that the part requires — then she dives into an apparently magical bag to unearth both a formal jacket for the male character, a fur stole, a period gown made in Vienna, and more. And it’s equally clear that Vanda has the commanding temperament of an autocratic director — a trait she uses to bring Thomas to rein.

Reibel’s performance drives this smartly-written play — and Rose is a fine foil. Both performers attack the material and its fascinating tangents (into the visceral appeal of fur, the aesthetics, ethics and language of love and power from the Greeks through to modernity) with gusto and intelligence. The set (Eric Allgeier), costumes (Shane Estes), lighting (Keith Kimmel) and sound (Richard McGrew) create a perfect frame for this production (and credit goes to dialect coach Sandra Forster-Terrell, who helped shape Reibel’s performance). •

“Will In the Ville,” the citywide celebration of the 400th anniversary of Shakespeare’s death, has been a fixture of this fall’s arts scene. A traveling exhibit featuring the 1623 First Folio is on display at the Frazier History Museum through Dec. 10.

For pure fun, I strongly recommend the Alley Theater’s revival of “The Complete Works of William Shakespeare (Abridged),” by Adam Long, Daniel Singer, and Jess Winfield. This is not the first time the Alley has put this on — but it may be the best version they’ve mounted. Parody has always been one of the Alley’s key strengths, but under Artistic Director Joey Arena, this fast-paced, disciplined production really capitalizes on the comic gifts of veteran performers Arena, Scot Davis and JP Lebangood. The comedy is the thing, but you can’t whip through these 37 plays without some serious acting chops — and you may find yourself suddenly being surprised when an actor flips the switches and you find yourself captivated by a rare piece of very serious acting. •

For weightier fare, there is “King Lear,” in a co-production featuring actors (faculty, affiliates and students) from the UofL Department of Theatre Arts and the Commonwealth Theatre Center (the company formed by the merger of Walden Theatre and Blue Apple Players.

Directed by Jennifer Pennington, this production brings an admirable and satisfying clarity to the complexities of the play. The exposition, which lays out the conflict between Lear (Baron Kelly), his daughters Goneril (Mia Rocchio), Regan (Lois Abdelmalek) and Cordelia (Sidney Edwards) is especially fine. Up and down the line there are fine performances that illuminate the moral collapse of Lear’s world. It’s instructive to see veteran professionals sharing the stage with their students, and what struck me was the acting prowess of the students. There are too many to list in their entirety, but, without slighting any, it’s worth mentioning the work of UofL students Michael Stein (Edgar), Shaleen Cholera (Edmind), Lauren Dobbs (in a stellar turn as Oswald) and Silver Creek High School student Bailey Lomax, in a dual role. •